Believe it or not, Greece has cut scarcely a euro's worth in real-money government expenditures during its devastating descent into austerity. This is a hard story to sell, mostly because it strikes people as absurd. You can see the suffering of the country, of the people. You can feel it. What else, other than less public spending, could cause such hurt?

But U.S. policy analyst Juan Carlos Hidalgo, an author and commentator associated with the Washington-based Cato Institute, says bluntly: "If we look at [government]spending in real terms, there haven't been any spending cuts in Greece." In a series of reports titled "Looking at Austerity," Mr. Hidalgo came to the same conclusion with Italy, Britain and France.

But Greece is the shocker. Surely something's amiss in Mr. Hidalgo's assertions.

Using European Commission numbers for Greece's public sector spending from the beginning of 2000 through the end of 2011, he purports to prove that Greece increased its inflation-adjusted spending last year at roughly the same rate it did in the eight years before the Greek crisis began. Does he succeed? The final call requires advanced degrees in economics. In fact, there are a number of ways to calculate government spending – all with different conclusions.

Amid the statistical confusion, though, Mr. Hidalgo makes an important, indisputable point. Thus far, austerity has been administered not by reduced public spending but by increases in taxes. Assuming that he is correct, national austerity programs, as administered now, can only result in larger government. The private sector must shrink; the public sector must grow. The state must expand. And the crisis of the moment must get worse.

Tracking public spending in real-euro terms, however, he reports that Greece's spending has increased every year for the past 11 years, finishing 2011 at its highest level ever: "In real terms, it continues to go up."

Although controversial, some economists prefer to track public spending as a percentage of gross domestic product – regardless of fluctuations, in troubled times, in the size of a country's economy. Mr. Hidalgo reports this measure as well.

In this case, Greece increased public spending from 47.1 per cent of GDP in 2000 to 53.8 per cent in 2009 – but has since cut spending to 50.3 per cent of GDP (a feat made easy by Greece's decline in gross domestic product). The number does provide clarity. Greece is now a country precisely divided: half in the public sector; half in the private sector. And its austerity protects the public sector and punishes the private sector.

In January, The Economist noted this cruel difference: Of the 470,000 people who have lost their jobs since Greece hit the wall three years ago, "not one of them came from the public sector." The public sector did take a 13-per-cent pay cut. But the government protected it from layoffs. (In exchange for its most recent bailout, Greece has agreed to cut its public sector work force by 2 per cent: a mere 15,000 people.)

Greece has designed its austerity program to protect its bloated public sector – and to pay for this extravagance through higher taxes. Indeed, The Economist reckons that the country's tax rates are now so onerous that "many people can barely survive."

Mr. Hidalgo notes that the International Monetary Fund agrees with this assessment. He cites Poul Thomsen, IMF mission chief in Athens, last fall saying that Greece "has relied too much on [higher]taxes … We have reached the limit."

Mr. Hidalgo tracks austerity in Britain, France and Italy to precisely the same destination. The three larger, richer countries show the same growth in government spending as Greece, only more so. Whether tracked in nominal or real-euro terms, the state is still on the rise.

Are Greeks really the hardest working Europeans? They certainly think so
May 29, 2012 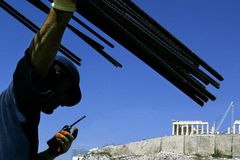 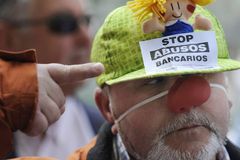 Irish vote will test the winds of EU's austerity program
May 29, 2012 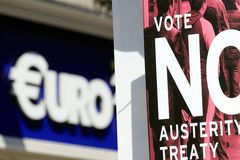 Greece's 4 big banks given $22-billion
May 28, 2012
Follow us on Twitter @globebusiness Opens in a new window
Report an error Editorial code of conduct
Due to technical reasons, we have temporarily removed commenting from our articles. We hope to have this fixed soon. Thank you for your patience. If you are looking to give feedback on our new site, please send it along to feedback@globeandmail.com. If you want to write a letter to the editor, please forward to letters@globeandmail.com.
Comments