Fintech is all the rage, and it's rife with both opportunities and pitfalls for investors.

At its essence, financial technology, or fintech, is the application of computer technology to solve problems in the financial sector. One simple example is an app under development by HSBC that would allow customers to view their account details across several different banks. Another is the emergence of online platforms for moving funds between different currencies based on exchange rates that are more favourable to consumers than those offered by conventional banks. At the racier and riskier end of the fintech spectrum are headline-grabbing cryptocurrencies such as bitcoin and ethereum. Most economists are flummoxed by the rise in value of these speculative "assets," stating at best uncertainty about their intrinsic worth and at the extreme taking a position like that of Nobel laureate Eric Maskin, who asserted "bitcoin has a fundamental value of $0."

Underlying cryptocurrencies is a computing concept known as blockchain, which itself has become the focus of frenzied attention. Recently, the Long Island Iced Tea Corp. made headlines when it changed its name to Long Blockchain, and began mining cryptocurrencies instead of brewing beverages, resulting in its stock price more than doubling in one day. What has since become widely known is that, prior to its shift in business focus, the company was at risk of having its shares delisted from Nasdaq because of its low market capitalization. The firm's name change served its purpose and Long Blockchain remains a listed company. However, management has since disclosed that they have "relatively little experience in the blockchain industry."

Another firm hoping to cash in on the blockchain bonanza is Kodak – yes, the company that in yesteryears produced film for cameras and that most of us thought had disappeared in the era of digital photography. Well Kodak's share price similarly surged after announcing plans to introduce a cyptocurrency called KODAKCoin, which runs on a blockchain-based platform. The stated purpose of this coin offering is to help photographers track the online use of their images and collect licensing royalties. Connecting the dots from KODAKCoin to royalties is apparently as easy as saying blockchain.

Kodak is indeed a tech company, but I will definitely wait at least a beat before conceding that the firm has transformed into a solid fintech company worthy of my own investment.

Widening the focus more broadly to the overall financial sector, certainly there is the potential for blockchain to spur innovation in some contexts (perhaps in trade settlement or supply chain management) and that innovation may translate into high rates of return for some prescient investors. However, just as we saw with the internet boom in the 1990s, there is the risk of significant fallout for investors who jump on the bandwagon without doing their due diligence.

Regulators are attempting to get ahead of the exuberance. In the United States, for instance, two new blockchain-focused exchange-traded funds were prevented by the Securities Exchange Commission from including the word blockchain in their fund names. And the SEC chairman recently stated that the commission "is looking closely at the disclosures of public companies that shift their business models to capitalize on the perceived promise of distributed-ledger technology," which brings to mind those recent actions by Long Island Iced Tea Corp. and Kodak.

I confess to being sufficiently intrigued by the new blockchain ETFs to have taken a peek into their top stock holdings, which alas revealed nothing magical. Among their top holdings, I found tech firms such as IBM, Microsoft, Intel and Cisco, financial firms such as Goldman Sachs and Citigroup, and, yes (of course), Kodak. An investor seeking to achieve similar returns without paying the associated dear management fee might simply buy and hold a similar portfolio, which many investors may find they already do without even trying.

The savvy investor will be skeptical of get-rich-quick schemes and suspicious of organizations that attempt to use trendy jargon to attract overly eager investors. The best investment approach continues to be the boring old standard of holding a well-diversified portfolio and being satisfied to earn the market rate of return. Such an approach will naturally include exposure to fintech, since nearly every firm in the financial sector is currently exploring ways to use artificial intelligence to increase productivity and develop innovative new products. If you are going to overweight blockchain in your holdings by buying the former film producers and former tea producers of the investing world, take a deep breath first and make sure you can afford to lose what you wager. In my estimation, the edgiest extremes of fintech – those firms, funds, miners, coins and cons that may be aiming to hoodwink or exploit investors – are worth avoiding.

Opinion
A reckoning is coming, but cryptocurrencies are here to stay
January 9, 2018 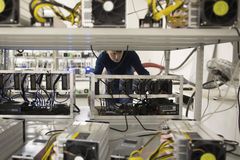 Opinion
Cryptocurrency’s crash is a matter of when, not if
December 7, 2017