Paola Subacchi is research director of international economics at Chatham House in London.

Over the years, London has ranked consistently at the top of the Global Financial Centres Index, ahead of New York, Hong Kong and Singapore. But, as many respondents to the 2016 GFCI survey foresaw, London's prominence may be threatened by the outcome of the referendum on Britain's membership. What does the Brexit vote mean for London's future as the world's leading financial centre?

London's share of the global financial services sector is large and well diversified, both in terms of markets and activities. It employs more than 700,000 people and is home to more than 250 foreign banks – the highest concentration in any financial centre – and to major derivatives exchanges, which account for about 15 per cent of global trade in commodities.

London is the leading centre for international bond trading, with an estimated 70 per cent of secondary market turnover. More than 500 foreign companies are listed there. Furthermore, London has a large asset-management industry – the total assets under management in Britain make it the second largest country in the world for this – and it is Europe's leading centre for management of hedge funds, sovereign wealth funds and private equity funds.

All this will change if Britain will no longer have access to the single market as a result of the process of negotiating Britain's exit from the EU set in motion by the referendum– it is anticipated that this process is likely to take several years. British-licensed banks will need to obtain an extra licence from the host supervisor in any member state in order to offer financial services throughout the single market – currently their British licence functions like a passport to operate in other EU member states.

Moreover, the clearing of euro-denominated trading from London will be moved to the euro area – Britain currently hosts five central counterparties, institutions that facilitate payment systems and the trading and clearing of securities and derivatives. The European Central Bank has always maintained that trade in euros should be located in the euro area and it was the ruling by the European Court of Justice in 2015 that ended a four-year dispute. New rules under Brexit will overturn this judgment.

The combined impact of both the removal of "passporting" rights and the repatriation of euro trading will have a significant impact on London, especially on banking and the bond and foreign currency markets. Approximately a half of European investment banking activity is conducted in London. Euro-denominated bonds account for three-quarters of the London market and more than twice as many euros are traded in Britain than in all the euro area countries together. On top of this, London's ability of attracting the most skilled individuals from other European countries will be significantly curtailed if restrictions on immigration will be put in place.

In the aftermath of the referendum, confusion is high. Nobody can predict how the future relationship between Britain and the European Union will look. Many options are on the table and no formal negotiation will start until Britain has a new government in place – at the earliest, after the Conservative Party conference in September, but increasingly more likely after a general election in the fall. Until then, it's business as usual. But can businesses in the financial sector afford to remain on hold?

The referendum has left Britain's euroskeptic genie out of the bottle and there is no way to reverse this situation. By calling the referendum, Britain has broken its link and its trust with the financial community. These will take many years to be restored. As a senior banker told me, the repatriation of the euro market to the euro area is not a matter of if, but when. As many as 70,000 to 100,000 jobs will be lost in the event of a relocation of banking and euro trading to other EU-based financial centres – Frankfurt, Paris, Luxembourg are strong candidates.

London will continue to be one of the leading financial centres, but the relocation of euro-denominated activities will reduce its size and scope. It will remain the largest centre in Europe, but as part of a network, each specialized in specific markets, rather than a dominant cluster. It will take years, but Brexit will shape a new geography in European finance.

Opinion
If Brexit costs a few City bankers their jobs, is that so bad?
July 1, 2016 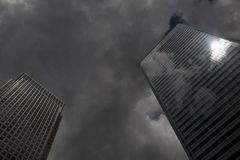