Eighty-three billion barrels: That's how much oil could be present in the Arctic, according to a high-profile U.S. geological survey report released in 2008. But the wave of excitement from the report is now receding, as some harsh realities sink in.

First, 83 billion barrels is not actually that much. It would provide enough oil to satisfy world demand for just three years at our current level of consumption.

Second, the report was an estimate of undiscovered reserves, based on some broad geological assumptions, since most of the Arctic has not yet been subject to exploratory drilling.

Third, 83 billion includes reserves that are technically, but not necessarily economically, recoverable. This distinction matters because the challenges associated with finding, extracting and transporting Arctic oil are considerable due to ice, severe weather and a dearth of infrastructure, services and search-and-rescue capability across most of the region.

Most of the projected 83 billion barrels are located offshore, in waters covered by sea ice for most of the year. Exploratory drilling can only take place in late summer and early fall, and drilling for a month or two in the Arctic costs more than a similar year-round endeavour elsewhere.

Although Arctic sea ice is receding, detached remnants of the ice pack continue to drift into the path of ships and drill rigs. In 2012, a drifting sheet of sea ice forced Shell to stop its operations north of Alaska. That summer, Shell failed to complete a single well, despite deploying two rigs and more than a dozen other vessels.

Unlike sea ice, which forms on the ocean surface, icebergs calve from land-based glaciers. Icebergs pose a serious threat to offshore oil operations only in the Eastern Canadian Arctic and around Greenland, where such glaciers are present. But icebergs are becoming more common, not less, due to climate change, as melt water lubricates the glaciers' movement into the sea.

Then there is "icing," which occurs when ocean spray freezes onto the superstructure of ships and rigs during Arctic storms, rendering them unstable and prone to capsizing.

As climate change progresses, Arctic storms will become more common. In December, 2012, Shell lost control of a drill rig while towing it from northern Alaska to Seattle in severe weather. The rig was forced onto the rocks and has since been destroyed.

Shell was towing the rig 5,000 kilometres south because the infrastructure and personnel needed to service and upgrade it were absent in Alaska. Operating at such immense distances adds greatly to the costs and risks of Arctic offshore oil.

Moving Arctic offshore oil to market would also be a challenge. Ice-strengthened tankers are expensive to build and cost more to operate than regular tankers. After leaving Arctic waters the oil might have to be transferred – at additional expense – to regular tankers.

A major spill in Arctic waters would have devastating environmental consequences, not least because oil disperses and degrades very slowly in cold water. More than two decades after the Exxon Valdez spilled over 80 million litres on Alaska's south coast, some of the oil remains present in the ecosystem.

Across much of the Arctic, distance, sea ice, seasonal darkness, rough weather, limited coastal infrastructure and a small and widely scattered population make a successful cleanup improbable. In 2011, U.S. Coast Guard Commandant Robert Papp warned Congress that the United States was unprepared to respond to a major oil spill in the region.

Oil companies face potentially massive cleanup costs in the event of an Arctic spill. In the United States, a $134-million (U.S.) liability cap applies to spills from offshore drilling operations. However, the cap does not apply in cases of fault or gross negligence, which is why BP accepted full responsibility after the 2010 Deepwater Horizon blowout in the Gulf of Mexico.

In Canada, the liability cap for Arctic operations was raised from $40-million (Canadian) to $1-billion in 2013. In Greenland, oil companies are required to post a $2-billion bond in advance of exploratory drilling. Calls are now being heard for all Arctic countries to eliminate liability caps, thus imposing the full cost of a cleanup on the responsible company.

Yet some countries and companies are still moving forward with Arctic drilling. The Norwegian government has issued leases in the southwest Barents Sea, although only in waters that are free of sea ice throughout the year as a result of the warming effect of the Gulf Stream. Norway is also unusual in that it has good ports, sizable communities and excellent search-and-rescue coverage along its Arctic coastline, all of which reduces the cost and risk and makes it possible to envisage at least a partial cleanup in event of a spill.

In Russia, state-owned Gazprom is already shipping oil from an ice-strengthened drilling platform in the southeast Barents Sea. But it is doing so at a monetary loss, as the Russian government strives to offset steep declines in land-based production. For Russia, it's not just an economic imperative – Arctic oil offers a way to maintain status and geopolitical influence.

The U.S. government has supported Arctic offshore oil exploration as a route to reducing American reliance on imports from Venezuela and the Middle East, thus improving national security. But the development of domestic shale oil and gas, along with more stringent fuel efficiency requirements for vehicles, has lessened this imperative. The United States is now likely to become energy self-sufficient without Arctic offshore oil.

Shell, however, seems determined to pursue its campaign north of Alaska. By the end of this summer, the company will have spent more than $7-billion over five years on exploratory Arctic offshore drilling – despite any possibility of recovering that investment unless and until the current world oil price doubles or triples.

So what is this about?

The stock prices of publicly traded oil companies, such as Shell, are partly based on their reserve ratios – that is to say, the difference between the amounts of oil they are currently exploiting and the amounts they have found but not yet tapped. If Shell can demonstrate that its leases north of Alaska contain vast reserves, this will boost its stock price even if it has no plans to actually extract and sell that oil.

For all these reasons, betting on Arctic offshore oil involves two big gambles. First, that oil will be marketable in the long term at much higher prices than today. And second, that high-cost, high-risk oil will continue to receive government support – in the form of liability caps, low royalty rates and an absence of carbon pricing. 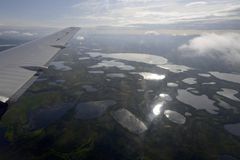 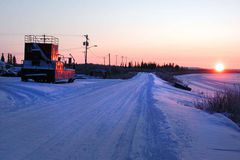