The makers of robot cars are hitting the brakes. Uber has suspended autonomous-car tests in the United States and Canada after one of its robot Volvos plowed into a pedestrian last weekend, with tragic results. After the fatality, Toyota also suspended tests.

The robot car industry, which seems to be devoting more science to the project than NASA devoted to the moon shot, faces a reset. These cars are coming but not nearly as fast as advertised. The fantasy of cities filled with self-driving cars while their passengers watch Netflix or order groceries from Amazon will remain a fantasy for a while.

Here are three big reasons why the robot-car revolution is more hype than reality.

The video of the Uber car striking Elaine Herzberg as she walked her bike across a six-lane road at night in Tempe, Ariz., was horrific. Based on the video, the Volvo took no evasive action – it did not appear to slow down or swerve – as it sped toward her. The fact that the accident happened at night should not have impaired the Volvo's sensors; the Lidar technology, which uses lasers to measure distance to an object, is supposed to work in all lighting conditions. "This is a catastrophic failure of what happened with Uber's technology," David King, an Arizona State University professor and transportation planner, told The Guardian.

The Arizona accident will certainly damage public confidence in autonomous cars, and it was never high in the first place. Various recent surveys suggest the public is wary of stepping into a car that drives itself. Last October, the Pew Research Center published a report that said "more than half of the public would not want to ride in a driverless vehicle today if given the opportunity. And many have significant concerns about turning life-or-death driving decisions over to machines, while expressing support for various policies restricting or limiting the use of this technology."

A 2016 MIT study concluded that "comfort or trust in full automation appears to be declining."

The other day, I talked to a commercial pilot who told me that the newest generation of passenger jets is capable, in some circumstances, of taking off, cruising and landing without pilots at the controls. "Pilots have become data processors," he told me. "But would you get on a plane without a pilot on board? Not me."

It appears many car passengers feel the same way about handing control of a car to a robot.

For the most part, depending on the jurisdiction, autonomous driving remains incompatible with the legal system. Ethical decisions, in effect, lie buried in the millions of lines of code in a robot car's computers that were probably designed by a 25-year-old tech nerd in Silicon Valley.

The codes determine the car's behaviour in potential life-and-death situations: Two pedestrians come out of nowhere and cross the road in opposite directions right in front of the car, which is travelling at 80 km/h around a bend, meaning the passengers don't have time to override the computers and take control.

Whichever way it swerves, one of them is killed. The victim's family go to court, demanding that every line of code be examined to determine why the car did what it did and who is liable – the car maker, the code designer or the car owner.

In the meantime, the robot-car maker is forced to take every one of its cars off the road while the court determines liability and damages, if any. Think of it as a massive precautionary recall for potentially faulty software.

Speaking of code, anything with a computer can be hacked. A hacked robot car could go rogue, turning it into a potentially lethal weapon – a cruise missile on wheels. A nightmare, yes, but it could happen and if it does, confidence in the technology could plummet.

I live in Italy, where drivers are aggressive and where no road space, not a centimetre, goes unfilled. Italian drivers smile when they think of robot cars interspersed with regular cars and scooters. What fun – just drive right in front of the robot car and watch it screech to a halt as you zoom ahead of it.

The mix of human drivers and robot drivers seems to be a recipe for urban chaos, especially in cities that are already at traffic breaking point. The solution? Perhaps dedicated lanes for robot cars. But who would pay to set up this network? And they might be vote killers. For a long time, maybe decades, the number of human-driven car drivers will outnumber robot cars. Start a war on regular cars by removing half of their lanes and the mayor is not getting re-elected. 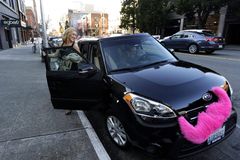