Since the 1940s, farmers in Canada and the United States have been able to ship tractors and tractor parts across the border without paying a dime in duties. Free trade in tractors at a time when agriculture was a critical North American industry? What a sensible idea, and evidence of the strong ties of friendship, commerce and economic common sense that have long existed between our two countries.

But it's now 2017 and amid the global explosion of e-commerce, Canadians are out of luck. There's no such thing as free trade when it comes to Canadians buying goods online from abroad.

Canadians are rightfully concerned about what U.S. President Donald Trump might have in store for Canadian businesses and consumers if he makes good on his protectionist threats regarding a renegotiated North American free-trade agreement and the dreaded border adjustment tariff. Prime Minister Justin Trudeau was in the U.S. capital not just on a deft charm offensive, but also to remind the President of the deep economic bonds between Canada and the United States.

But consider this: Americans are now allowed to spend more than 40 times as much as their northern neighbours without paying duty on products shipped from abroad. The new limit for Americans is $800 (U.S.). For Canadians? It's $20 (Canadian).

That's right. If you, as a Canadian, buy an $18 coffee press on Amazon that ships from California, you won't get hit with duties. But, if you want to splurge and get the fancier Bodum for $25, you could end up paying twice as much after forking out taxes, duty and customs-broker fees. Your American cousin, on the other hand, can order a $700 (U.S.) espresso maker online from The Bay and pay – well, $700, plus shipping.

Why should Canadians pay duty on the very same items Americans can buy duty-free? And why are they unable to participate in global e-commerce the way their peers in other countries do routinely?

It's understandably grating to Canadian consumers, who are fed up with the sticker shock that often accompanies their online imports from the United States and abroad – fees levied on products or apparel lines bought from retailers that often aren't available in Canada. Canadian businesses, too, are unable to access global supply chains and buy inventory in a way that is comparable and competitive with American sellers. The situation is particularly unfair to Canadians and Canadian companies who are typically underserved by Canada's retail sector – smaller towns, rural communities and the North. A higher limit would not only address those inequities – it would also have substantial economic benefits.

Increasing the limit would provide a shot in the arm for mail-delivery services north of the border, would save government millions of dollars in administrative costs and would also ease the significant financial burden on Canadian businesses that rely on supplies ordered from the United States or abroad. A coalition of Canadian and U.S. businesses has been leading the charge on the issue and an online petition has amassed more than 15,000 signatures. The issue is certainly on the Trudeau government's radar.

After all, it makes no economic sense for Ottawa – it costs them much more to collect the duties than it raises for their coffers by levying them. A study published by the C.D. Howe Institute concluded the federal government is effectively spending about $166-million (Canadian) every year to collect $39-million in revenue. U.S. officials have raised the issue with their Canadian counterparts before. So, too, have U.S. online marketplaces who complain that Canada's limit is among the most restrictive in the developed world. Just two weeks ago, more than 40,000 people signed an open letter to Finance Minister Bill Morneau from eBay urging him to up the limit.

Mr. Morneau is putting the finishing touches on the next federal budget and talked recently in Washington about avoiding looming trade tensions between Canada and the Unted States. Foreign Affairs Minister Chrystia Freeland, meantime, vowed to return any new U.S. tariff with Canadian tariffs.

The Retail Council of Canada has argued against upping the online import limit, insisting it would hit Canadian retailers and their employees hard. It also says federal and provincial governments would suffer a big revenue loss. But the numbers don't bear that out, and it seems the very height of protectionism to believe that it's anti-stimulative to lower the costs of goods that Canadians are already buying and want to buy. 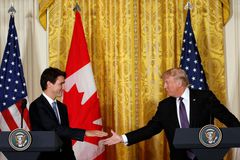