There are many different ways to measure a government's economic performance, but none is perhaps as relevant as evaluating how it manages the hand it is dealt. That hand is made up of a number of cards, from the budgetary situation it inherits from its predecessors to external factors such as commodity prices, interest rates and long-term demographic trends.

All this makes ranking the performances of successive governments a tricky affair. If demographics are destiny, comparing rates of economic growth experienced in the 1960s with recent trends is bound to yield unfavourable results for current office holders. The baby boom unleashed several decades of above-average population growth and consumption that is ending as the boomers retire and progressively consume less of everything, except health care.

Structural transformations in the economy, resulting from changes in technology and globalization, play a major role in determining the trajectories for growth or unemployment. Attempts to resist these forces with interventionist labour-market or fiscal policies might boost short-term growth and employment, but can result in painful reckonings later on, as much of Europe has discovered. Too much debt lowers a country's growth potential. The combination of high public debt and an aging population is about the worst hand any government can be dealt.

This is useful to keep in mind when assessing Conservative Leader Stephen Harper's economic record. Based on 16 economic indicators, Jim Stanford and Jordan Brennan of the Unifor labour union recently ranked Mr. Harper's nearly 10-year-old Conservative government dead last among the nine federal governments that have held office since 1946. But even if you accept their selective choice of data, the numbers provide an incomplete picture unless placed in context.

Mr. Stanford and Mr. Brennan rank the Harper government second-last on income inequality, based on the average share of income held by the top 1 per cent of Canadians between 2006 and 2012. But Statistics Canada reported that the top 1 per cent's share peaked at 12.1 per cent in 2006, the year Mr. Harper took office, and declined thereafter to reach 10.3 per cent in 2012.

What's more, as the Parliamentary Budget Officer noted last year, the tax changes introduced under the Tories since 2006 "have been progressive overall. Low and middle income earners have benefited more, in relative terms, than higher income earners." Their income-splitting policy slightly shifts benefits up the income ladder, but it still benefits the middle class most.

As StatsCan's Andrew Heisz and Brian Murphy have noted, one of the main reasons inequality spiked in the late 1990s had to do with cuts to employment insurance and welfare. Why did those cuts happen? In 1994-95, the federal debt had exploded to 68 per cent of gross domestic product and interest costs on that debt surpassed $44-billion, or 34 per cent of government revenues. Canada was dangerously close to hitting a debt wall.

Cuts to EI and in transfer payments to the provinces, which forced the latter to slash welfare benefits, were the consequence of federal spending levels that had become unsustainable. Markets may have forced it, but Jean Chrétien's government stepped up to the plate. The federal debt-to-GDP ratio was cut in half on its watch and fell more when Paul Martin was Prime Minister.

Despite a surge in stimulus spending during the recession, Mr. Harper has brought the debt-to-GDP ratio back to within a percentage point of its precrisis low. Interest charges on the debt are projected to reach of 8.9 per cent of government revenues this year, a quarter of the level Mr. Chrétien faced when he took office. Low interest rates have helped, but a lower overall debt level is the main reason Ottawa's books are in good shape.

This means that whichever party forms the government after Oct. 19 will have a decent hand to play in the face of any external shock, such as a global recession or a long-term decline in oil prices.

Still, the Tory record is a mixed one. They've drilled holes through the tax code, with paternalistic or crassly political measures that will do nothing to enhance economic competitiveness. They've shown a surprising inclination toward 1970s-style industrial policy and corporate welfare. But they have not cut transfers to the provinces (yet) and have sustained high research spending.

The Tories were dealt a good hand when they took office. Just leaving the books in the state they found them probably earns them an above-average rating. Canadians could do worse. The question facing voters on Oct. 19 is whether they could also do better. 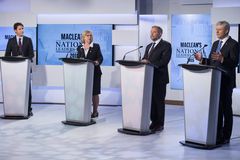 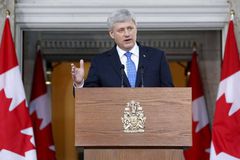 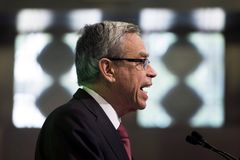