Montreal's 195th St. Patrick's Day Parade is set for Sunday. But instead of winding down the city's main shopping drag, as it has for more than half a century, one of the oldest St. Paddy's Day parades in North America will take a detour to avoid the mess on Sainte-Catherine Street.

Entire sections of La Catherine, as the legendary downtown thoroughfare is known, have been dug up as Montreal embarks on a four-year long project to replace century-old waterworks and make the street more pedestrian-friendly. But for now, the street that had the third most expensive rents in Canada in 2017 is just a muddy mess.

Sainte-Catherine is hardly alone among once-dominant shopping arteries in having to redefine itself to compete with online retailers and prepare for a potentially car-free future. But retailers fear that, instead of making La Catherine better than ever, the city is rapidly killing it.

Similar projects completed along Saint-Laurent Boulevard and Saint-Denis Street in recent years saw dozens of stores and restaurants close. Neither street has recovered. While the sidewalks are wider and the risk of broken water mains has diminished, the lesson seems to be that it is very hard to revive a street once you've alienated shoppers. Especially if you make it impossible to park.

Unfortunately, the same story appears to be repeating itself on Sainte-Catherine Street. Sensing the inevitable, several retailers closed locations on La Catherine in advance of the construction work that began in January. Others are planning to do so when their leases expire.

And who could blame them? Access to dozens of stores along the eastern stretch of Sainte-Catherine that is now dug up has been cut off by construction barricades that limit pedestrian traffic – in some places to a single-file line. You'd have to be desperate for a Five Guys burger to navigate the construction barricades and holes outside the fast-food chain's main Sainte-Catherine Street outlet.

HBC is supposed to install a Saks Off Fifth store in space once occupied by the now defunct Ailes de la Mode fashion chain, according to mall owner Ivanhoe Cambridge. But an HBC spokesperson refused to confirm the information.

Ivanhoe Cambridge, a unit of pension fund manager Caisse de dépôt et placement du Québec, has undertaken a $200-million renovation of the Eaton Centre to integrate the Ailes complex that occupies most of the former Sainte-Catherine Street Eaton's store. But for now, it looks like a ghost mall, with most of its store fronts boarded up on the main and upper levels.

There are glimmers of hope. Japanese retailer Uniqlo has reportedly been considering opening its first Quebec location on Sainte-Catherine Street. And the flagship Birks jewellery outlet that sits kitty corner to The Bay is undergoing a facelift. But for now, it's a boarded-up eyesore.

The makeover of Sainte-Catherine Street crystallized under former Mayor Denis Coderre, who even envisioned installing heated sidewalks. That plan has been shot down by the woman who ousted him in November's municipal election. Mayor Valérie Plante has also abandoned Mr. Coderre's idea of erecting inflatable tents to cover up the construction. Retailers feared that would only cause further delays and inflate costs.

Still, Montreal's construction industry and urban planning department could use a primer on best practices to minimize the unsightliness of work sites and speed up construction. In almost any other North American, European or Japanese city, projects of this nature would be completed in half the time or less, with far less disruption caused to merchants and shoppers.

The Plante administration is promising to unveil a plan later this year to compensate retailers for lost business caused by construction with subsidies or tax breaks. But many merchants fear it will be too little and/or too late to save them.

The new mayor, whose ecologist Projet Montréal party is no fan of cars, will also soon announce its official plan for Sainte-Catherine Street, which is certain to include wider sidewalks and far fewer parking spaces. Indeed, Projet Montréal leaders have in the past advocated eliminating all parking along Sainte-Catherine. Retailers think that would be catastrophic without a big investment in above-ground or underground parking lots nearby, as is the case in many European cities that have closed shopping streets to car traffic.

It may all be moot, anyway. By then, La Catherine may be dead.

Café Cléopâtre a beacon of sin from Montreal’s wild, wicked past
December 8, 2017 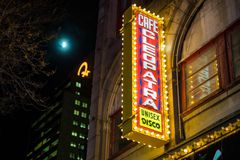