The Muskrat Falls hydroelectric project in Labrador was always destined to define the political legacies of the politicians who championed it. As by far the biggest capital undertaking in Newfoundland and Labrador history, it would either enrich the province as a North American clean-energy power provider or saddle it with a Hoover Dam-sized debt it would long regret.

The skeptics hovered long before oil and gas prices tanked, leaving the provincial government facing massive deficits far into the future and dismal prospects for fetching premium prices for the project's power on export markets. Newfoundland taxpayers risk paying for Muskrat Falls in more ways than one.

The $7.7-billion project also risks burdening Canadian taxpayers, who, thanks to the federal loan guarantee on $5-billion worth of Muskrat Falls bonds, are responsible for repayment should the provincial entity that issued them default. That, thankfully, is not an immediate concern. But that a federal guarantee was needed to get this project off the ground in itself testifies to its iffy economics.

The most immediate dilemma facing Newfoundland's new Liberal government, which recently swept out the Progressive Conservative regime that launched Muskrat Falls, involves taming a spiralling deficit that is partly a result of the hydro project's cash needs. The previous government forecast that it would invest $760-million this year in Nalcor, the provincially owned energy company, "primarily for the Muskrat Falls project." A similar sum is slated for next year.

That is a huge chunk of change on an $8-billion provincial budget. The previous government forecast a $1.1-billion deficit this year, a shortfall now expected to top $1.8-billion as oil revenues sink. The new government of Premier Dwight Ball will release a fiscal update next week. But the deficit will likely exceed 5 per cent of gross domestic product, compared with Alberta's shortfall of 1.8 per cent of GDP. That's how dire the Rock's finances have become.

The three Tory premiers who lunged into the Muskrat Falls venture – Danny Williams, Kathy Dunderdale and Paul Davis – all promised the massive investment would pay off in future dividends as Nalcor raked in profits from hydro sales. Those assumptions have never looked so shaky.

The project is behind schedule and over budget. In September, Nalcor upped its cost estimate for Muskrat Falls to $7.7-billion from an initial $6.2-billion. The total comes to more than $9-billion, when financing costs during the construction phase are included. That may not be the end of cost overruns before the power starts flowing in 2018 – or later.

About 20 per cent of the power from Muskrat Falls will be sold to Nova Scotia utility Emera, replacing energy from its dirtier coal plants. Emera is building a $1.5-billion underwater transmission link to ship the power from Newfoundland. But the rates paid under that long-term contract are locked in, leaving Newfoundland responsible for cost overruns on Muskrat Falls.

About 40 per cent of Muskrat Falls energy is slated for consumers in Newfoundland via an underwater link from Labrador. That is supposed to allow for the closure of a dirty oil-fired generating station on the island. But concerns about the reliability of Muskrat Falls power – transported across several climate zones and merciless terrain – make that unlikely.

Meanwhile, the commodities crash has dimmed prospects for selling the remaining 40 per cent of Muskrat Falls power to mining developments in Labrador. And reliability concerns are a major obstacle to finding buyers south of the border. The province's grid does not meet reliability standards set by North American regulators, and the costs to ensure it does would be hefty.

Carbon pricing was supposed to make Muskrat Falls a no-brainer, and it may yet improve the project's economics. But the clean-energy marketing pitch was hurt by a recent peer-reviewed study by Harvard University scientists who looked at the effects of dams built at Muskrat Falls. It found that "methylmercury concentrations from flooding for hydroelectric development will be far greater than those expected from climate change," threatening local Innu populations.

All of this leaves Newfoundland's shrinking population facing a growing liability for Muskrat Falls. "This politically charged project is large relative to the provincial economy and is expected to place considerable upward pressure on future electricity rates," Moody's noted this year in a report on Newfoundland Power, the private power distributor that, as a condition of the federal guarantee on Muskrat Falls, must buy its electricity from Nalcor.

Former top provincial bureaucrats Ron Penney and David Vardy, who estimate that Muskrat Falls will increase Newfoundland's gross debt by 50 per cent, recently called the project "one of the most unfortunate public-policy decisions in the history of the province."

Many Newfoundlanders wish they could simply pull the plug. 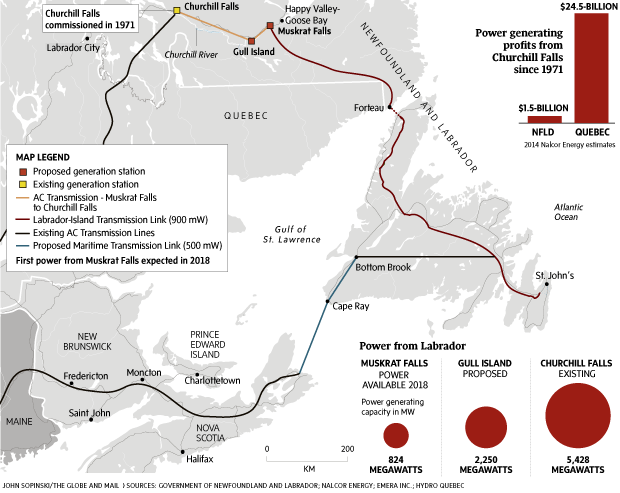 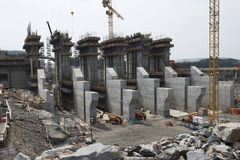 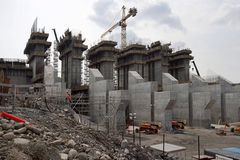