Ottawa is preparing its fall budget update from a position that few bean counters in the Finance department would have anticipated six months ago. Suddenly, opportunity has emerged for this government to shift from deficit spender to deficit slasher, years ahead of schedule – if it wants to.

Consider the numbers that the government is looking at as it prepares the update, to be presented within the next few weeks . Recent final numbers for the budget year ended March 31, 2017 showed a deficit of $17.8-billion, more than $5-billion smaller than the government had estimated in the budget it released last spring, and more than $7-billion smaller than originally budgeted. Real economic growth could well top 3 per cent in 2017, more than one full percentage point above the budget's 1.9-per-cent projection.

Whether through policy or serendipity ( it's debatable how much share of the credit each deserves), government coffers are reaping the benefits of an economy that has outperformed even the most optimistic of expectations .

A report Wednesday from Toronto-Dominion Bank projected that the deficit is on target for $16.2-billion for 2017-2018 – a jaw-dropping $12.3-billion smaller than the government calculated in the budget. And that includes the $3-billion wiggle room the government has built into its budget; without it, Ottawa would be looking at a deficit of just $13.2-billion.

In the spring, Canada faced $20-billion-plus budget shortfalls for the next four years, at least. A few months of surging economic growth later, and $10-billion is suddenly in sight.

That $10-billion figure should ring a bell. It's the amount Prime Minister Justin Trudeau pledged would be the ceiling for the deficits that he proposed in the federal election campaign two years ago – temporary budget shortfalls that would fund a dramatic increase in infrastructure investment and help stimulate a struggling economy, to be whittled back into balance within a few years. Instead, his government tabled budgets with nearly triple that amount of red ink, and by last spring it had abandoned talk of balanced-budget targets.

The substantial change in Canada's fiscal landscape over the past several months has brought balances back into the conversation. It was a big part of the discussion last week when Finance Minister Bill Morneau held the consultation meeting with leading private-sector economists. They urged Mr. Morneau to take advantage of the windfall from the strong economy to start unwinding the government's substantial spending stimulus and set new targets for whittling down the deficit.

Their argument for this is a straightforward one: The economy no longer needs the amount of spending the government has been injecting into it. The big boost in spending – 6 per cent last budget year and probably something close to that again this year – may have made sense when fiscal policy was leaning hard against an economy struggling to overcome the damage from the collapse of oil and commodity prices, but it's overkill when the economy has largely emerged from that slump and is delivering sustainable, broad-based growth.

"When Ottawa embarked on the fiscal-stimulus road about 18 months ago, the main arguments for that shift were: growth was far below trend; the jobless rate was rising; borrowing costs were extremely low, with real interest rates negative; we were starting with a balanced budget; and finances could readily absorb a modest widening of the deficit. Now, growth is far above trend, the jobless rate is falling fast, interest rates are rising and the deficit is close to 1 per cent of GDP. None of the justifications for stimulus remain," said Bank of Montreal economists Douglas Porter and Robert Kavcic in a recent research report.

Moody's analytics economist Adam Goldin went a step further, arguing that continued fiscal stimulus runs the danger of overheating an already hot economy – which could have troubling consequences. "If left in place, the current spending glide path could push the economy past full employment, spurring above-target inflation and forcing the Bank of Canada to increase [interest] rates more quickly, jeopardizing policy makers' ability to achieve a housing market soft landing," he wrote in a recent report.

All of which argues for the government to resist the temptation to use the additional fiscal space the strong economy has given it to introduce new programs that might play to its voting base (which the Liberals have been alienating lately). There are only so many moments in an economic cycle to get the fiscal ball rolling toward clear deficit-reduction targets; growth is unlikely to get any better than it has been this year. If the Liberals really meant what they said during the 2015 election campaign about temporary deficits and a commitment to balanced budgets, then that moment is upon them. 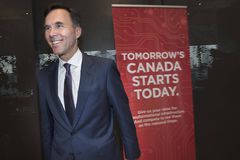