What sets them apart as leaders? They all think differently about what they do. They question. They innovate.

Thinking differently. That's the point. Why? Because of the world in which we live, the nature of the challenges we face. Innovation and creative destruction are the motors of our times. And technology is setting a pace of change unlike anything we've seen before.

In this world, innovations destroy businesses as fast as they create new ones. Think of 3-D printing: Its consequences are revolutionary, affecting everything from the manufacturing of airplane engines to regenerative medicine.

That applies as much to government as it does to business or anything else. But here's the paradox. At a time when creativity is relentlessly driving change in so much of our world, many would limit governments to managing their way through, rather than working with others to solve problems.

It started in the 1980s and '90s, when we decided governments needed to become "more like businesses," adopting the metrics – and vocabulary – of corporations. Citizens became "clients." Compliance replaced creativity.

The job of government was defined in terms of its "efficiency," and the emphasis was placed on the minimal "must do" instead of the aspirational "can be."

Of course, governments have to demonstrate good stewardship of public resources. But if all they do is count change, it limits their ability to effect change. The fact is when big problems arise – whether it's a financial crisis like 2008 or a tragedy like Lac-Mégantic – people's first instinct is to look to government for a solution.

Yet opinion researchers tell us that people are increasingly disappointed with our collective response to the issues that matter most: income inequality, health care for the elderly, climate change and so on. They're withdrawing from public affairs and wondering whether we still have the ability to tackle big challenges, to do big things.

That's important, because big, pan-societal issues like climate change are not going to yield to individual effort. There are no apps for them. We still need institutions that can bring together ideas and organize responses big enough – and comprehensive enough – to make a difference.

The answer is not to turn the clock back to a time when government thought it could solve a problem unilaterally. It is not about bigger government versus smaller government.

It's about different government. This is about government moving away from a manager's obsession with doing things better to a leader's focus on doing better things. Think of fostering innovation, being open to new ideas, encouraging experimentation, rewarding risk-taking. And, frankly, accepting failure as a condition precedent to success.

The good news is that there is lots of creative thinking coming from our leaders – especially at the local level. Case in point: Medellin, Columbia. In 1992, it was labelled as one of the most dangerous cities in the world. Today, it's one of the world's most innovative in its urban planning, architecture, transportation systems, libraries and schools.

Here in Canada, there is the Winnipeg Boldness Project, a neighbourhood-based, early childhood development initiative. Government, non-profit foundations and aboriginal leaders are coming together to address a complex social issue, one child at a time.

There are many other examples, such as the creativity driving Boston's Office of New Urban Mechanics or the mission of New York's Innovation Delivery Fellows to implement new ideas.

Of course, these are all small steps. But they are a start. Today, progress comes incrementally: step by step, sometimes including a step back, until you make a breakthrough, then another. There are no silver bullets, no once-and-for-all solutions.

Fortunately, today's young people excel at this. They're used to working collaboratively, interactively, iteratively, across networks. They know to tackle problems through an open-source world.

Governments need to catch up, to operate differently. That means to put a priority on imagination, invention and innovation.

And it starts by thinking differently.

This commentary is adapted from a speech delivered at the Public Policy Forum's 28th annual testimonial dinner in April. 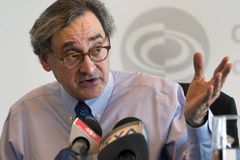