So here's the $65-million question about Shaw Communications' broadcasting play: Is the Shaw family 10 years behind the times, or 10 years ahead of them?

Shaw's deal to buy control of CanWest Global and its television stations - yes, even the crummy ones - was not met with ecstatic ratings from the viewing audience on Bay Street, probably because it has this strange retro feel to it. If we understand the thinking here on Shaw's part, it is: We own the big fat pipe into people's homes, so wouldn't it be swell if we owned what goes down that pipe, too?

Yes, sounds excellent. It sounded just as compelling a decade ago, when BCE emptied the vault to buy CTV, only to sell most of it several years later at a sizable loss. (CTV is now owned by CTVglobemedia, which also owns The Globe and Mail.)

That deal and others like it, in particular the marriage from hell between Time Warner and AOL, turned convergence into a dirty word. Now it's back, sort of. But there's a lot less to this deal than there was to the over-hyped disasters of Convergence 1.0. This one is neither as ambitious nor anywhere near as expensive.

Paying for it isn't based on some absurd notion, advanced by greedy investment bankers, that convergence is a magic formula for wringing billions of dollars in new revenues out of customers. The CanWest stake is cheap, and we'd be quite certain that $65-million - the minimum cost of Shaw's purchase of a controlling CanWest stake - is barely more than what's uncovered behind Jim Shaw's refrigerator when his housekeeper does the spring cleaning.

So the move says less about the Shaws' strategic genius than it does about their nose for a bargain, which is a big reason for their success. Still, there is an element of strategy here. Those earlier attempts at convergence failed in part because the behaviour of the media consumer didn't change as quickly as people thought. In 2000, no one had an iPod yet, never mind an iPhone. YouTube did not exist. "Streaming Web video" did, but the quality was terrible.

Things have changed. Several themes have dominated the broadcasting and cable landscape in the intervening 10 years. Conventional TV's decline has accelerated. Cable specialty channels, the prize assets in CanWest's stable, have continued to gain viewers and advertisers. And in the battle for the living room, cable has crushed the phone companies, for the simplest of reasons: Cable has a better network. There's a reason Shaw investors enjoyed nearly 18-per-cent annual gains from 2005 through 2009 (including a rising stream of dividends) while shareholders in BCE and Telus barely stayed ahead of inflation.

There's also a reason why CanWest and CTV have gone to Ottawa to ask for fees from the cable and satellite companies to prop up their struggling conventional stations. (I think we know what happens to that lobbying effort now: Among private broadcasters, CTV stands alone.)

So where are we today? Web entertainment continues to fragment TV's audience. Hundreds of thousands of new videos land on YouTube daily, and half of that site's users go to it at least once a week. Meanwhile, the Internet is going wireless, thanks to smart phones. That's an advantage for the telcos - which, by the way, are also making headway on rebuilding their wired networks to make them better. Telus, Shaw's main competitor in the West, will soon have an upgraded fibre-optic network available to most homes in its territory, says National Bank Financial analyst Greg MacDonald - allowing them to carry more high-definition channels, for example.

Cable is still winning, but its technological advantage appears to be shrinking. In the fight to come, any small edge might help. Does owning a sliver of the Montreal Canadiens hockey team help Bell gain customers? Will owning HGTV and the Food Network help Shaw keep subscribers, or allow it to gain new ones once it opens its new wireless service? Who knows?

What's dead obvious is that the Shaws aren't paying much to have the option. For now, this is a deal with a small cost, and benefits to match.

ROB Magazine
Who do you call to clean up a mess like BCE? A man called Cope
May 2, 2018 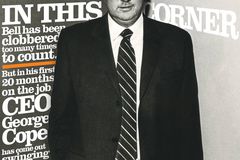