In George Romero's classic horror flick Dawn of the Dead, the movie's heroes take refuge in a deserted mall where they gorge themselves in a free-for-all shopping binge before being attacked by an army of flesh-eating zombies. Made in 1978, Romero's movie is in part a satire on American consumerism, but the director couldn't have anticipated that, four decades on, the concrete retail playgrounds he satirized would turn into graveyards, albeit without zombies.

Across North America and the U.K., mall doors are closing and main-street shops are being boarded up as online retailing takes a bigger and bigger piece of our weekly consumer spend. J.C. Penney and Macy's have in total announced more than 200 store closings in 2017 and Toys "R" Us filed for protection from its creditors, while Sears gave warning in a series of announcements that 300 Kmart and Sears outlets would shut their doors. In Britain, 15 shops a day ceased trading in the first half of the year. Even retail giant Marks & Spencer is feeling wobbly at the knees; it recently announced that 53 outlets would close.

But that is not the whole story, because some retail property investors are feeling confident, bullish enough to wade through Amazon's digital floodwaters and invest huge sums in shopping malls. Earlier this month, Hammerson, Britain's biggest retail property investor, owner of the Brent Cross shopping centre in London, the Bull Ring in Birmingham and the Trafford Centre in Manchester, made a £3.4-billion ($5.85-billion Canadian) offer for Intu, a rival. Less than a week later, Franco-Dutch group Unibail-Rodamco consolidated its position at the top of Europe's property ladder with a $24.7-billion (U.S.) offer for Westfield, the Australian shopping centre developer.

The money is mostly in stock, and you could argue that these deals are made by drunks propping each other up as the barman rings the bell for last orders. Yet Westfield is a very special business, and if Frank Lowy, the elderly founder, is giving up control, he is also handing over some prize assets. Unibail is not just buying floor space; Westfield's malls are built around the idea that shopping in wealthy countries has little to do with necessity and everything to do with entertainment. They don't just have cinemas or restaurants or even a skating rink but they organize stunts, such as last year's concert by Lady Gaga for a group of 60 fans on the rooftop of the Westfield Centre at White City in London.

White City was not named for its ethnic composition but for an earlier venture in consumerism: the Franco-British exhibition of 1908, a commercial fair on 140 acres that celebrated the imperial achievements of the two nations in a network of grand and brilliant white buildings, little of which remains. The Westfield Centre is also about showing off, a cornucopia of high-end consumer brands from Bentley cars to Jimmy Choo shoes. A shopper doing the weekly round wouldn't find bargain breakfast cereal at Westfield's White City, but she might be entertained by the windows at Tiffany. The 1908 Franco-British fair, complete with its colonial exhibits, including an Irish village of "colleens" and a Senegalese "native village," attracted eight million visitors. More than a century later, the promise of stuff you just don't need delivers Westfield an aggregate footfall of 1.2 billion a year, an average of 15 million for each mall in its portfolio.

It is about bringing people into an environment where they are more likely to loosen the grip on their purses, something that common sense tells you is more likely to happen in the heightened sensory environment of a well-designed mall, or even among a pretty parade of shops and restaurants.

Credit Suisse recently predicted that a quarter of America's malls would shut by 2022, that means 275 centres will be closing their doors. If that sounds dramatic, it needs to be seen in perspective. America is overshopped with 2,353 square feet of mall floor space per 100 Americans, twice as much mall per shopper as in Canada and almost five times the shopping centre acreage in Britain. Meanwhile, the online blunderbuss is showing signs of jealous interest.

Amazon is dipping its toes in bricks and mortar retailing, following the example of Apple with heavily branded shops in high-end urban locations. In November, the online colossus opened a pop-up shop in Soho, a fashionable quarter of London's West End, once notorious for prostitutes but now populated by ad agencies, gay bars and coffee shops. For Amazon, it's a bit of brand placement, but it is also an admission that the company has understood the underlying problem with online shopping: it's boring and a bit low-rent.

While the tumbleweed chases the zombies through suburban shopping malls, there is every sign that the main street is beginning to find its way back. Pop-ups, fast fashion and street markets are more fun than tired retail parks and more exciting than the keyboard in your kitchen. It is in our crowded cities that the future of shopping will be decided, and that is where retail money is moving. 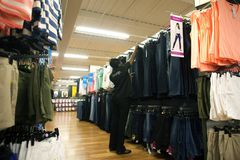