Mark Milke has authored multiple reports on subsidies to business for several policy think tanks over the past 20 years.

Here we go again: Almost $1-billion in new corporate welfare for the newest political interference in the marketplace, this for so-called "superclusters," i.e., for locales where politicians hope industries and universities will create the next Silicon Valley.

For those who missed it, the federal Department of Innovation, Science and Economic Development was behind this recently announced lottery. In it, winners from oil and gas, manufacturing, robotics and agriculture, among other sectors, secured $950-million in taxpayer-financed supercluster funding. The department, formerly known as Industry, and thus a more accurate description for a ministry devoted to funnelling tax cash to politically favoured industries, offered the usual cliché justification for more taxpayer-funded lolly directed to corporations. The department forecast the public's cash will "create tens of thousands of middle-class jobs."

Problem: Superclusters, if one must use such corporate PR-speak, are not new. Economist Jack Mintz addressed the love affair with "clusters" two decades ago in a report for then-finance minister Paul Martin's Finance department. Nor are clusters likely to be super in the results for taxpayers or net employment gains.

The employment creation claim is empirically flawed. It is akin to a Ponzi scheme, where the proponent guarantees above-market returns if. Of course, great returns are possible only if some other mark has already funnelled her savings into the illicit scheme. Taxpayer-funded subsidies to businesses are exactly that: a diversion of money from elsewhere. It is why the political announcements of new jobs are inevitably a triumph of hope over empirical realities.

It's not that spending $950-million won't have an effect on the economy or employment; it will. But dropping bags of cash from the CN Tower would also result in increased economic activity and employment.

But one key flaw in the surface assertion is always the lack of attention to the underlying substitution effect. That's where money is taken from others (individuals and businesses), and which prevents new economic activity elsewhere. In economic language, that's called an opportunity cost. That's why in terms of economic impact, corporate welfare is always a wash at best, or worse, negative.

To grasp this more clearly, the federal government is "targeting" specific sectors and geographic areas for taxpayer-financed support. But one of the best, most comprehensive analyses of such targeting and the subpar studies that undergird the political and industry rationale once summarized it this way: "Targeting is based on poor data, unsound social-science methods and faulty economic reasoning and is largely a political activity." The author, Terry Buss, now a professor of public policy at Carnegie Mellon University in Adelaide, Australia, did recommend that targeting studies (not necessarily corporate-welfare outcomes) "could be improved somewhat" if transparency in how such conclusions are reached were made public. But such transparency has always been lacking, including in Canada.

For example, Cliff Oldridge, an Industry department project officer now retired has, for years, tried to pry out the supporting justifications, data and estimated results for previously announced job-creation estimates from his former department. He has been at this for years through Access to Information requests. Other than some spotty disclosure in 2011, the department has refused such empirical-friendly useful transparency ever since, similar to most government departments. Even if Innovation provided the basis for indulged-in past corporate-welfare schemes and the methods by which they arrived at their previous numbers, never mind the new ones, such claims might still suffer from the flaws that Prof. Buss discovered when he examined past industry and government studies: correlation-causation errors, exaggerated benefit claims, double counting and ignored opportunity costs. Prof. Buss characterized such studies as "simplistic" and "non-scientific."

A more recent paper also looked at what they characterized as "new" and also old industrial policy (another name for corporate welfare). They found little justification for it. The authors concluded that "Over all, there appears to be little empirical support for an activist government policy even though market failures exist …"

Back to Prof. Buss, who characterized government attempts to target specific sectors for gains as "nothing more than central planning." That's as charitable as one can be about such political, civil-servant and business collusion. An even better description: another billion-dollar, government-engineered Ponzi scheme. ‘We are in this as a country’: Navdeep Bains discusses the $950-million superclusters initiative Subscriber content
February 16, 2018 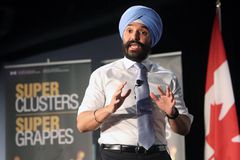 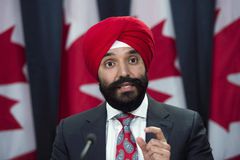