The highly anticipated Final Report of the federal government's Task Force on legalization of cannabis that was released this week is all of these things. The report is simply advice to the government, and none of its recommendations may ultimately be enacted. However, it is a valuable bellwether of public opinion and does a great job of compiling the important matters that any future legislation must address. If implemented, its recommendations could shake up the industry, leading to increased specialization by licensed producers who can currently do it all, more officially licensed roles for other types of businesses that must currently play a reactive role in the cannabis economy, and more opportunities for brand-new industry subsectors.

For subscribers: Independent marijuana dealers get a buzz off pot producers

Gary Mason: The many potholes in marijuana legalization

Keenly aware that it is mapping out new terrain that has been legally out of bounds for the entire lives of most Canadians, the Task Force had the courage to point out how ineffective prohibition of cannabis has been, and the compassion to consider the interests of society's more vulnerable members in making its recommendations. Key to the cannabis business community, the report also provides a clearer direction for the country's nascent marijuana industry while giving rise to interesting new possibilities for producers, distributors and retailers.

Some elements of the report should come as no surprise, such as the acknowledgment of vast popular support for commercial production being left in the hands of the private sector, and praise for licensed producers and their good production practices as overseen by Health Canada. Although the report contemplates a "diverse" marketplace that includes "small producers," the concept of the licensed producer (in some form) is virtually taken for granted as the dominant means of production under a recreational cannabis regime. Investors seemed to concur, as share prices of some publicly listed licensed producers spiked after the report was released.

The report suggests cannabis retail outlets not be co-located with sellers of alcohol or tobacco, and therefore that cannabis should not be sold through liquor stores. The task force did not take a position on whether cannabis should be sold through private-enterprise storefronts or government monopolies. This would likely be left to the provinces to decide. However, the recommendation that some form of retail sales of cannabis be permitted, if enacted, could lead to the fragmentation of the producer's licence as production is separated from distribution and sale.

Right now, a licensed producer may possess, produce, sell, provide, ship, deliver, transport and destroy cannabis. But just as Shoppers Drug Mart has famously applied for a limited (and hitherto non-existent) form of producer's licence that would allow it only to distribute cannabis, we could see the creation of further iterations of a "cannabis licence" as the industry unfurls.

For example, the report considers the many components of a safe and responsible supply chain, encompassing production, distribution and retail. It is conceivable that entities that are not licensed producers but that form part of the distribution and retail elements of that chain may also eventually be required to be licensed in some form – from security and transportation providers, to seed-to-sale trackers, to retail handlers and even professional destruction services.

If licensing becomes more specialized, licensed producers may need to choose between continuing to perform all of their current roles or focusing on fewer of them. Specialization is a good thing – it lets businesses focus on what they do best. Licensed producers should be able to focus on growing if they want to, and other would-be participants who don't want to be a producer (such as Shoppers) should be able to contribute the sophisticated skills that they have to the industry without being asked to take on a production role as well.

The report also considers the need to balance supply of cannabis against demand. It notes that a miscalculation of demand could create opportunities for illicit producers to fill the void. It also suggests that some elements of the current licensing process, such as security requirements, may be prohibitively expensive or difficult to implement, thus creating unnecessary barriers to entry into the regulated marketplace, and recommends that such requirements be reconsidered under a new regime.

However, this would not necessarily lead to more licensed producers: the report also contemplates that in aligning supply with demand in a recreational market, production controls could be implemented through such means as limiting the number of production licenses issued or the total amount of product that any one producer is allowed to supply. The enactment of either of these recommendations could significantly change the current regulatory landscape, in which the regulations do not limit the number of licenses that may be granted, and licensed producers are subject to individual production maximums.

The report is not a crystal ball, and none of its recommendations may ever be implemented into law. But as a compassionate and courageous distillation of thousands of Canadian voices, it demonstrates what's working and what needs rethinking. For the cannabis industry in particular, it balances pride and confidence in the existing industry together with the suggestion that the future is very much still in our hands to create. 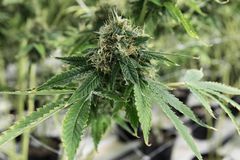 Opinion
The many potholes in marijuana legalization
December 16, 2016

Pot chains make plans to expand across Canada ahead of legalization
December 14, 2016
Follow us on Twitter @globeandmail Opens in a new window
Report an error
Due to technical reasons, we have temporarily removed commenting from our articles. We hope to have this fixed soon. Thank you for your patience. If you are looking to give feedback on our new site, please send it along to feedback@globeandmail.com. If you want to write a letter to the editor, please forward to letters@globeandmail.com.
Comments