Aaron Brown is a former managing director and head of financial market research at AQR Capital Management. Author of The Poker Face of Wall Street.

CME Group announced plans to offer a bitcoin futures contract this year. This brings it in line with Cboe Global Markets, which announced similar plans in August, and LedgerX, which began trading in bitcoin options and day-ahead swaps two weeks ago. These contracts are important steps toward integrating bitcoin with the global financial system. I see three plausible scenarios, although only one leads to bitcoin becoming more mainstream.

All three exchanges are regulated by the U.S. Commodity Futures Trading Commission, which appears willing to treat bitcoin as a commodity such as wheat and oil. The U.S. Securities and Exchange Commission has been less accommodating, and without a friendlier SEC, institutions will be reluctant to offer bitcoin-related retail products or to include bitcoin in institutional portfolios such as pension funds. (Full disclosure: I own bitcoins and other cryptocurrencies.)

The concern of bitcoin skeptics is that it's a Ponzi scheme. The concern of true believers is that absorbing bitcoin into the global financial system would destroy its value. Neither fear factored into regulatory decisions.

The CFTC focused on whether futures clearinghouses could deliver what was promised to traders. LedgerX does this by holding 100 per cent collateral. Cboe and CME will use cash settlement. The CFTC did not seem too worried about whether investors could buy and sell bitcoin at settlement prices. The SEC concentrated on the trustworthiness of the settlement prices. It noted that bitcoin liquidity is fragmented among mostly unregulated exchanges, and subject to manipulation, insider trading and other abuses. Moreover, the regulated exchanges that proposed to trade the bitcoin ETF did not have surveillance-sharing agreements with bitcoin exchanges. The SEC is expected to relent on this issue and allow registered bitcoin products. If regulators smile and clearinghouses operate without problems, we'll find out what happens when cryptocurrency prices are exposed to real money.

The market capitalization of all cryptocurrencies is $182-billion (U.S.), but that probably represents only a few billion dollars of actual investment. There are large holders who would like to reduce their exposures at current prices, and retail and institutional investors who would like to buy in. If tens of billions of dollars come into cryptocurrencies from long-term, passive holders, it will add stability and liquidity to the market. But the price at which current holders' supply matches institutional investors' demand could differ from today's prices.

Here's how to think about that: Suppose Satoshi Nakamoto, instead of inventing bitcoin, created an island the size of South Carolina in a temperate region of the Pacific Ocean. Most land is held in large blocks by the first inhabitants and a few people who bought below $10 an acre. Recently, though, small lots have sold at $6,400 an acre. On that basis, the entire island is worth $107-billion. But until outside investors commit tens of billions of dollars to buy and develop large portions of the island, that $107-billion is paper wealth only, and outside investors are only likely to buy in size if regulatory questions are resolved.

In this world, the CFTC has allowed exchanges to trade land derivatives but the SEC has refused to approve registered investment products based on the real estate agent reports, for fear of manipulation and other market abuses.

First, the SEC digs in its heels and institutional money stays leery of bitcoin. In some ways this makes bitcoin more valuable, but only to a subset of people, and the cryptocurrency will likely remain illiquid and volatile.

Second, the SEC relents and global regulators start treating bitcoin as a commodity, but there isn't interest from long-term, passive investors. Bitcoin appears more like a penny stock, subject to pumps and dumps. CME and Cboe would lose interest.

Third, the SEC relents and, let's say for argument's sake, $50-billion flows in from long-term, passive investors over the course of 2018. Bitcoin prices may go up or down as a result, but the new prices would be real in a way the current prices are not. Stability and liquidity lead to more use, which leads to more stability and liquidity. Bitcoin becomes a standard financial commodity, and a useful part of the global financial system. 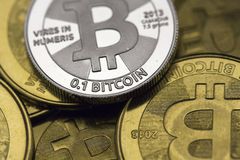