Andrei Sulzenko is a former trade negotiator and head of the auto sector in the federal industry department. He is currently executive fellow at the School of Public Policy, University of Calgary.

It must be embarrassing for the U.S. Trade Representative to try to make the case that NAFTA has been unfair to American auto manufacturing. The convenient proxy for this unfairness is the auto-trade deficit with Mexico, which is substantial and growing.

On the surface, this argument is appealing, as it dumbs down a complex reality. Aside from the fact that trade surpluses or deficits don't reveal very much about relative competitiveness – they have more to do with the interplay of intricate international supply chains and relative-demand conditions – they are also grossly misleading.

For subscribers: Clark: How Donald Trump could claim victory on NAFTA

For subscribers: Built by NAFTA: How free trade saved this Canadian manufacturer

This is especially true in the case of autos. Let's take an extreme hypothetical example in which Mexico assembles cars using American-made parts and sells those cars back to the U.S. for $15,000 each. Since final assembly constitutes only about 20 per cent of a vehicle's value, that means the 80 per cent representing imported parts would be worth $12,000. In terms of trade statistics, Mexico would enjoy a surplus, exporting $15,000 for every $12,000 it imported, but in reality, Mexico would contribute only one-fifth of the value of each vehicle, while the U.S. contributes four-fifths. Which country is better off economically under that scenario? The reality on the ground will be somewhat different, but the basic point is that trade data can have little to do with underlying economic performance.

The American demand to raise the NAFTA-sourced content requirement from the current 62.5 per cent is similarly baffling. Increasing that amount to, say, 75 per cent would help reduce the penetration of imported parts from countries not part of the North American free-trade agreement, but would in no way guarantee more U.S.-based manufacturing. That is perhaps why the American side is alluding to a U.S. content level – a non-starter for both Mexico and Canada, as that is not even "fair" trade, let alone "free" trade; rather, it's "managed" trade along the lines of the softwood lumber negotiations, in which quotas are being discussed.

Let's assume there is a standoff on changes to the terms of auto trade. In these circumstances, the parties would fall back on their World Trade Organization obligations for the maintenance of most-favoured nation (MFN) tariffs. In the case of the U.S., it is about 2 per cent for cars and parts, while for Canada, it is 6 per cent – hardly a major barrier to trade when floating exchange rates can fluctuate by that much in a matter of weeks. Indeed, it would always be an option for Canadian- and Mexican-based companies to export to the U.S. under MFN rather than NAFTA provisions. The U.S. would not have the option of raising their MFN tariffs, as they are "bound" as part of a comprehensive multilateral agreement.

It would also be against U.S. interests to have auto trade fall back to MFN tariffs. In the case of Canada, imports from the U.S. would then be subject to a 6-per-cent duty, while imports from Korea are now duty free, as they soon will be from the European Union, once the Canada-European Union Comprehensive Economic and Trade Agreement is implemented.

The one exception to this relates to trucks – essentially vehicles with a body on a chassis rather than unibody construction – including some SUVs. In this case, the U.S. MFN tariff is a punitive 25 per cent, going back many years to retaliation over an unresolved agricultural trade dispute with Europe.

Here again, though, auto companies could reallocate production in North America to ensure that trucks are assembled in the U.S. rather than Mexico or Canada. Such repurposing of plants is a regular occurrence in the auto industry. This kind of reallocation would not, however, necessarily change overall automotive production levels among NAFTA partners. After all, assembly plants are major investments that will not be readily abandoned, especially the more modern ones predominant in Mexico.

All this is to say that U.S. negotiators are playing a weak hand on auto issues, and Canada and Mexico should stay cool in the face of the blustery rhetoric that is really directed at an American public untutored in the intricacies of trade policy.

The real challenge for Canada and Mexico will be to find a way for the U.S. side to save face from its ill-considered approach. In the end, that may prove impossible, with politics trumping economics. Even so, the North American auto industry will have tools at its disposal to adapt, albeit at the expense of efficiency and, ultimately, at the expense of the car-buying public. 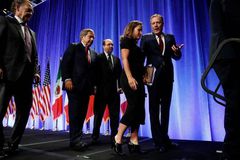 Opinion
With NAFTA, we need to advance our thinking about manufacturing
August 6, 2017
Opinion
Canada will have to play hardball at NAFTA talks
July 18, 2017
Follow us on Twitter @globeandmail Opens in a new window
Report an error
Due to technical reasons, we have temporarily removed commenting from our articles. We hope to have this fixed soon. Thank you for your patience. If you are looking to give feedback on our new site, please send it along to feedback@globeandmail.com. If you want to write a letter to the editor, please forward to letters@globeandmail.com.
Comments