Andrei Sulzenko is a former Canadian trade negotiator and is currently executive fellow at the School of Public Policy, University of Calgary.

After the latest round of NAFTA negotiations and Prime Minister Justin Trudeau's visit to Washington, the jig is up.

The U.S. administration's game plan is now clear: Make multiple outrageous demands that, even if partially accepted, constitute a huge "America First" victory; or, if rejected outright by Canada and Mexico, set up a failed negotiation and a messy denouement – also a win in terms of U.S. President Donald Trump's public antipathy to the North American free-trade agreement.

What is now apparent about that prospective denouement is the likelihood of the United States promoting separate bilateral negotiations with Canada and Mexico after jettisoning three-way NAFTA talks. Mr. Trump clearly signalled this in his meeting last week with Mr. Trudeau. Not surprising, as the United States has always preferred the greater leverage of bilateral deals to multipartite ones such as the Trans-Pacific Partnership (TPP).

Indeed, it would be politically toxic in Mexico to be seen re-engaging with a country that seemed to be negotiating in bad faith.

As for Canada, the original 1989 bilateral free-trade agreement with the United States still underlies NAFTA and there would be no apparent urgency in either country to re-engage bilaterally if Mr. Trump's political base already had its red meat. After all, Mexico has been the far larger source of American angst over its trade imbalance.

Furthermore, it will take some time for the dust to settle in the United States should the NAFTA talks fail, no doubt with recriminations blasting from Congress.

So what is a probable scenario following a U.S.-contrived failure of the current negotiations?

Second, even if the United States then proposes to negotiate bilaterally with both Canada and Mexico, the triggering of a withdrawal from NAFTA will provoke a strenuous domestic debate over whether that is within the President's prerogative. Such a debate will likely lead to court challenges that culminate in a Supreme Court review. (This is a wild card because the U.S. Constitution is unclear on whether the executive or legislative branch can abrogate treaties.)

Third, there will be major accompanying push back in Congress against withdrawal from NAFTA, invoking its legislative authority over trade-agreement implementation, aided and abetted by an overwhelmingly pro-NAFTA business community.

Fourth, the ill will generated by the trade debate will likely result in collateral damage to any remaining hopes for co-operation between Congress and the Trump administration on other major issues such as tax reform, thereby increasing policy gridlock.

Fifth, given the unreliability of our U.S. trading partner, Canada and Mexico, participants in the original TPP, will forge ahead with a revival of that agreement among the other parties, including Japan. Ironically, if TPP2 were to come to pass, the United States would have its export market potentially impaired by reciprocal preferential access among TPP2 partners.

Sixth, all this controversy will be rolled into U.S. midterm election campaigning, without much prospect for clarity on U.S. trade policy direction until after November, 2018. In this connection, Canada would be well advised to take a time out from bilateral talks until the United States sorts out the problems it has created and clarifies its real objectives.

A year is a very long time in politics, and the landscape may be quite different at that time. In this regard, there are many possible outcomes on the trade front. For example, it is always possible that NAFTA as we know it will remain intact and that negotiations can be resumed on a more pragmatic basis.

In light of that uncertainty, Canada should keep cool and let the turmoil south of the border play out.

Having said that, the United States will always be our No. 1 trading partner. But if the various elements of the scenario outlined above unfold, we can spend greater time and effort in the intervening months pursuing better access to other important foreign markets.

Opinion
Canada must prepare for life after NAFTA
October 16, 2017 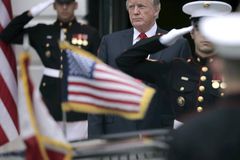