Justin Trudeau loves to talk about artificial intelligence, superclusters and quantum computing. Just last week, the Prime Minister met up with TV personality Bill Nye (The Science Guy) to chat about these and other futuristic challenges.

Unfortunately, Mr. Trudeau is now grappling with a decidedly low-tech crisis: getting a big 2017 grain crop to global customers over a clogged rail network.

Farmers and shippers have compared the current bottleneck to 2013-14, when Stephen Harper's Conservative government eventually ordered railways to do their job and carry more grain.

This might as well be 1913. It is mind-boggling that 133 years after completion of the transcontinental railway Canada still struggles to get vital exports of wheat, canola and barley to global customers.

The explanation offered up by the major haulers – Canadian National Railway Co. and Canadian Pacific Railway Ltd. – seems distinctly un-Canadian. They have blamed frigid temperatures and heavy snow, which have forced them to run slower and shorter trains, coupled with a larger than expected grain crop.

Really? Erratic weather and fluctuating crop yields have been part of life in Western Canada since long before the Last Spike.

The real causes are considerably more complex, and they get at one of the fundamental challenges facing the Canadian economy – underinvestment in critical infrastructure, including rail networks and energy pipelines.

CN knows it has neglected its network. That's why it has just hired hundreds of conductors and is buying 200 new locomotives, as well as upgrading key parts of its network to carry more trains. Unfortunately, these enhancements won't come in time to help with this year's grain crop.

Another problem is competition from other shippers. Grain farmers are vying for space on a limited network of rails and cars with shippers of crude oil, automobiles, lumber, iron ore and sand used in the booming oil-and-gas fracking industry.

Meanwhile, Canada's failure to build pipelines to keep up with rising oil sands production over the past decade and a half has become a chronic drag on the economy. A lack of pipeline capacity has pushed more barrels of crude onto the rail network. That, in turn, helps make oil sands crude less attractive to buyers. The widening price gap between Canada's heavy oil and the lighter crude produced in the United States – West Texas Intermediate (WTI) – is costing producers billions of dollars a year.

The lack of energy and rail investment is also spilling over into other industries, most notably agriculture.

The damage is both financial and reputational. Grain companies in Western Canada are losing sales and being forced to pay steep penalties to foreign buyers, The Globe and Mail's Eric Atkins reported last week. Poor rail service is hurting Canada's standing as a reliable food supplier at a time when the country is hoping to expand global markets by signing new trade deals with European and Pacific Rim countries.

The resulting cash crunch facing farmers is threatening their ability to plant crops for the new season.

The cost of doing nothing is high. The 2013-14 rail bottlenecks cost the Canadian economy an estimated $8-billion in lost revenue, and the price this time could be just as steep.

There are some answers to the mess, but Ottawa has been slow to move on them. The Transportation Modernization Act, Bill C-49, is moving slowly through the Senate. Among other things, the legislation would allow greater penalties when rail companies fail to deliver goods as contracted and improve data sharing. It would also encourage more interswitching – an arrangement where different rail companies compete for customers in regions served by a single line.

The federal government has given CN and CP until March 15 to come up with concrete plans to clear the growing backlog. In a letter to the companies, Transport Minister Marc Garneau and Agriculture Minister Lawrence MacAulay said the problem extends beyond agriculture and is now hitting forestry, energy and chemicals shippers as well.

"Canada's international reputation as a reliable supplier is at stake," the ministers rightly pointed out.

Giving the railroads a deadline is a good start.

But the problem isn't just seasonal.

The country needs to take a hard look at the adequacy of the infrastructure that underpins the export economy, and quickly fill those gaps.

That may not be as sexy as superclusters and quantum computing. But it's no less important. 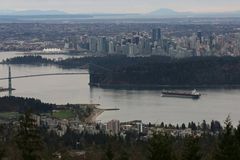