Following the referendum, I see Greece's default on its debts to the European Central Bank and its European counterparts as inevitable. This sovereign default bears the hallmarks of a Greek tragedy where the characters suffer from fatal flaws. The Greeks are too proud to allow themselves to be bossed around by the rest of Europe, while the euro zone leaders are too stubborn to admit they were wrong to bail out Greece in 2010 and too shortsighted to recognize that they must inevitably write down Greece's debts. With no one willing to back down, there can be no compromise.

Grexit may be the unavoidable outcome. And as painful as it may turn out to be, it may be the best option for Greeks themselves. To agree to a third bailout under punishing terms would only delay the inevitable. Greece can simply not afford to pay back its creditors in full.

The International Monetary Fund knows that Greece's debt is unsustainable, which is why they took the highly unusual step of publishing their internal forecasts last Thursday, July 2.

First, when the IMF last reviewed Greece in May, 2014, Greece's debt/GDP was 175 per cent of 2013 GDP and was projected to decline to 117 per cent by 2022. This level was seen as sustainable in the short run if Greece managed to borrow another €29-billion ($40.5-billion Canadian) over the coming 12 months to meet interest and debt payments, and paid off some of its debt by privatizing state-owned assets (particularly the government's stakes in the Greek banks).

Neither scenario is realistic. The IMF admits there is deep-seated political resistance to privatization. And with the Greek banks running out of cash and close to default, the point is moot. Now, the only way the IMF staff feel Greece can meet this 2022 debt/GDP target is for Greece's official lenders to write down their debts by more than 30 per cent. IMF managing director Christine Lagarde is patiently watching from the sidelines, ready to administer a defibrillator after Greece's cardiac arrest.

Second, to ensure debt sustainability in the longer term, Greece needs to grow real GDP at over 2 per cent a year. But the IMF reports that real GDP growth since Greece joined the EU in 1981 until 2014 averaged just 0.9 per cent per year, with total factor productivity (TFP) – a measure of the efficiency of the economy – averaging 0.1 per cent a year. This is the worst performance of any euro area economy. Absent a crisis, Greek real GDP was actually forecast to shrink by 0.6 per cent a year due to the country's aging population. Greece could achieve 2-per-cent real GDP growth only if labour force participation increased to the highest level in the euro area, unemployment fell to German levels and TFP growth matched the best performer in the euro area (Ireland). Anyone who reads this extraordinary statement more than once will understand that this simply wasn't going to happen.

Third, the IMF assumed that at some point the private sector would be willing to lend to Greece, allowing official lending to be replaced at market rates. Current official lending is at a highly concessionary rate of about 2.2 per cent. The IMF forecast assumed private lenders would refinance Greece at a nominal interest rate of 6.25 per cent for the next several decades. At this rate, and with Greece generating a primary surplus of 2.5 per cent of GDP, it could feasibly pay down the debt to sustainable levels. (The primary surplus is shorthand for how much money is available to pay interest expense after collecting taxes and paying for government expenditures).

The IMF actually hoped Greece would pass reforms – such as raising taxes and cutting pensions – that would lead to primary surpluses of 4-plus per cent. The current Greek government, a coalition of the radical left, was elected specifically to resist this austerity plan. This mandate was confirmed by the referendum. Now, no private sector lenders will step in. And with Greece's borrowing needs expected to rise while the primary surplus vanishes, there is no way Greece can afford its debt. They simply don't have the ability to get ahead of it.

I confess that I am cynical about politics. I subscribe to the view that the average politician will do whatever it takes to stay in office. Greek Prime Minister Alexis Tsipras called a referendum, then campaigned against it in order to have someone to blame – the Greek voter – for the coming economic train wreck. In Europe, meanwhile, politicians such as German Chancellor Angela Merkel know that appearing to give in to Greece will lead to an electoral backlash. In her mind, better to write down Greece's debt following a default then to pardon it upfront. European taxpayers will be paying the bill regardless, but this way they will blame the Greeks, not their own politicians.

So what happens next? I predict the inevitable writedown of the debts owed by Greece to its European partners, the ECB and other private lenders. It may happen through Grexit and it may happen at the bargaining table. But this sovereign default is as inevitable as any corporate entity going into bankruptcy. The creditors (Germany, France and others) will complain and the company's shareholders (the Greek public) will suffer. I just hope the CEO doesn't get to keep his job. 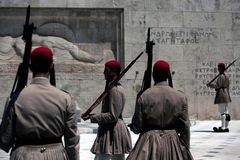