Peter Nowak is a Toronto-based tech writer and the author of Humans 3.0: The Upgrading of the Species.

If you were to ride a horse through the middle of downtown Toronto, or any big city for that matter, you'd probably find yourself in trouble with police. So too might be the case with driving a car in the not-so-distant future.

With the race to roll out autonomous vehicles picking up speed both literally and figuratively, it's foreseeable that driving – the kind that involves a human at the wheel – will eventually become just as odd and potentially illegal as trotting a thoroughbred down Main Street.

It may seem like the far-off future, but self-driving cars are arriving faster than anybody expected. Last week, for example, ride-sharing service Uber unleashed a fleet of robot taxis in Pittsburgh. Commuters there can now hail a car on their phone and have it take them wherever they want to go. Uber engineers are accompanying riders for the time being, but the cars will ultimately work alone.

In Ontario, the town of Stratford is currently testing the wireless networks that will connect robot vehicles to one another. It plans to become the first municipality in Canada to have sanctioned test vehicles on the road, starting by early 2017.

The cars themselves are incrementally becoming robots with each passing year. The process started years ago, with simple features like cruise control, and has expanded to include lane detection, automatic braking and self-parallel parking. Tesla's cars can already drive themselves with their "Autopilot" feature.

The conversion is happening quickly, thanks to push and pull from both businesses and governments.

Software companies such as Google, which has been pioneering self-driving vehicles for much of the past decade, see future business opportunities. Uber and its chief rival Lyft see the potential for big profits by eliminating the human drivers they currently use. Traditional automakers, recognizing the competitive threat posed by these outsiders, are having to join the movement with gusto.

Governments, meanwhile, are buying into the purported safety benefits. Google reports that its cars have driven more than two million kilometres, with just 14 collisions and no fatalities to show for it. Tesla says Autopilot, while responsible for a fatality earlier this year, has otherwise racked up 209 million kilometres with only one further crash.

Human drivers, on the other hand, are tallying up casualties akin to a small war. Nearly 40,000 Americans die in auto-related accidents each year, and about 1,700 in Canada.

In light of those numbers, it's understandable that governments may try to make manual driving illegal. It's one of the deadliest things humans do.

The transition may take decades, but like the incremental automation of the cars themselves, it's likely to come in steps.

Self-driving vehicle experts don't foresee a situation where humans will have their right to drive revoked outright, but further conditions could be added to the licensing process that will make it increasingly difficult to take the wheel.

"There might come a time when you need to prove why you need to drive," says David Ticoll, a distinguished fellow at the University of Toronto's Munk School of Global Affairs.

Human driving may end up reserved for specific individuals, such as emergency personnel, who need to rush through traffic quickly and in unpredictable ways. (It's worth noting that the only people who can get away with riding horses through cities nowadays are police.)

Getting a driver's licence, which involves taking lessons and tests and inevitably paying for them, is already proving too onerous for many. Licensed drivers are on the decline in both Canada and the United States, especially among young people. A 2014 study of Metro Vancouver, for example, saw the number of people between 20 and 24 holding licences decline to 55 per cent from 70 per cent a decade earlier. Better public transit and a preference for urban living were cited as key factors. Automated ride-sharing from the likes of Uber and others is sure to accelerate it.

"The trends are moving in a direction that certainly imply that millennials and the younger generation are moving away from wanting to drive," says Lauren Isaac, manager of transportation sustainability at New York-based engineering firm WSP Parsons Brinckerhoff.

To that end, several provinces, including Ontario and British Columbia, have recently enacted stiffer penalties to combat sharply rising incidents of distracted driving. It's becoming obvious that paying attention to the road is the last thing humans actually want to do.

"This problem only applies to people who have already been drivers," Mr. Ticoll says. "A typical 16-year-old won't go through this rite of passage … why would they want to?"

Like all technological diffusion, the shift is likely to be urban at first, with rural areas lagging behind. Farmers in the countryside – where it's still mostly legal to ride horses – are likely to be the last people allowed to drive.

"The technology will make it so that you don't want to drive," says Stratford Mayor Dan Mathieson. "But there'll still be the guy trying to get hay from one farm to another that's going to present a challenge on how this is going to work." 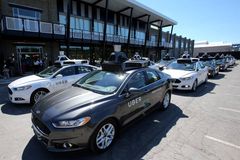