It's been 18 months since Justin Trudeau promised to "stop Stephen Harper's plan to end door-to-door delivery… and undertake a new review of Canada Post." After a well-researched task force discussion paper and a confusing Commons committee report, your future postal service is still clouded with uncertainty.

The government has a difficult decision to make. Does it continue to require Canada Post Corp. to be financially self-sustaining, which means service reductions and price increases? Or, is it prepared to return CPC to a social service and burden taxpayers with the resulting subsidies?

The task force found that in the absence of major business and operational changes, as well as reductions in pension costs and funding, Canada Post's self-sustainability is not achievable in the medium and long term. The reasons underlying this conclusion are legion.

Letter mail, CPC's biggest revenue source, is under siege from digital technology alternatives. Volumes have dropped 32 per cent since 2006. Direct-marketing mail is suffering the same fate with a 15-per-cent decline. The growth in parcel business is not enough to compensate.

The corporation's costs are growing faster than its revenues. Labour costs are 41 per cent higher than private-sector competitors. CPC is not allowed to close or franchise 3,700 protected corporate post offices. Its pension plan has a staggering $8.1-billion solvency deficit, which the government has allowed CPC to temporarily suspend.

The task force was prohibited from considering the option of privatization or deregulation, which has succeeded in other countries. The option of postal banking was studied. They found the field was already well served, the competition strong and the cost of entry prohibitive.

None of the other options identified to keep CPC financially self-sustaining are new.

Completing the conversion of door-to-door delivery to community mailboxes offers CPC the greatest savings potential at about $400-million. It was the key part of the corporation's plan to maintain profitability.

When Mr. Trudeau naively promised to reinstate door-to-door delivery, he failed to include the $400-million figure in his "fully costed" Liberal platform. There was no mention of how CPC was to finance this promise. It remains an overarching question today.

At $74-million, alternate day delivery does not generate nearly the savings of community mailbox conversions. Converting 800 high-volume corporate post offices into franchise outlets would save about $180-million. But this would require union agreement to change the 1994 "rural moratorium." Further process streamlining would yield $64-million in savings.

Under "Other Opportunities," the task force cited increasing prices, addressing labour costs, and using post offices as community hubs. Desperate to offer something new, they identified postal distribution of marijuana when it's legalized. No mention of including munchies with each shipment.

Financing door-to-door delivery for all Canadians would mean applying all the above service reductions, plus major rate increases. The Liberal-dominated Commons committee deliberately side-stepped this inconvenient reality.

They recommended the moratorium on community mailbox conversions be continued and door-to-door delivery reinstated for communities converted after August 3, 2015 – the day the election writ was dropped. This arbitrary cut off date would restore delivery for about 350,000 addresses, but leave 480,000 others out in the cold.

It would require CPC to find about $200-million in other service reductions and price increases. Other than supporting postal rate increases based on inflation, they made no recommendations about how CPC was supposed to manage this financial burden and remain profitable.

It made a vague suggestion about CPC "delivering digital communications infrastructure to rural Canadians" without any business case analysis. There was also call for "modernizing" the pension plan without offering a workable solution.

Canadians and businesses have a positive perception of Canada Post's service. They are surprisingly aware of the challenges the corporation faces and willing to accept changes in mail delivery. Two-thirds polled by the task force felt "CPC should increase the number of community mailboxes to make the system sustainable."

The Commons committee told Mr. Trudeau what it thought he wanted to hear without considering the sensible views of Canadians or the financial implications for Canada Post. The government said last week that it will make a decision by spring on whether to resume door-to-door delivery to those Canadians who lost it. The Prime Minister should revisit the task force's public opinion research. It gives him solid rationale to drop this ill-conceived election promise. 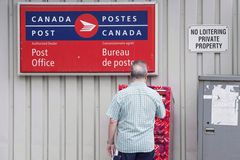 Appeal court sides with Canada Post in Hamilton community mailbox dispute
October 19, 2016
Follow us on Twitter @globeandmail Opens in a new window
Report an error
Due to technical reasons, we have temporarily removed commenting from our articles. We hope to have this fixed soon. Thank you for your patience. If you are looking to give feedback on our new site, please send it along to feedback@globeandmail.com. If you want to write a letter to the editor, please forward to letters@globeandmail.com.
Comments