"As human beings we suffer from an innate tendency to jump to conclusions, to judge people too quickly and to pronounce them failures or heroes without due consideration of the actual facts."

- The Prince of Wales

I have often thought it unfortunate that the Prince of Wales – Prince Charles as many of us usually know him – is not always recognized for the lifetime of charitable work that he has committed himself to since leaving the Royal Navy in 1976.

Helping young people find employment, encouraging business leaders to play roles in creating healthy communities, regenerating neighbourhoods through the repurposing of heritage buildings, promoting traditional arts, revitalizing traditional languages and preserving rain forests are all part of his list of key priorities. Together, the 15 organizations that comprise his group of charities is one of the largest multicause charitable enterprises in the world and remains guided by his personal vision and values. Quite simply, the Prince of Wales is one of the world's greatest charitable entrepreneurs.

In 2011, my husband Galen and I helped the Prince open his first charities office outside of Britain here in Canada. Since that time, Prince's Charities Canada has achieved noteworthy success in developing a variety of Canada-focused programs and initiatives in every province and territory. The programs are relevant and targeted to the benefit of Canadians, based on the Prince's vision of identifying charitable needs and creating opportunities that provide solutions to those needs.

These programs include the Prince's Operation Entrepreneur, which helps veterans start their own businesses after serving Canada so bravely; the Responsible Business Network, which helps disadvantaged youth get into sustainable employment; the Aboriginal Languages Initiative, focused on the revitalization of declining Indigenous languages through a series of children's books; Accounting for Sustainability, which explores practical approaches to integrating sustainability into corporate decision-making; and of course the Campaign for Wool, designed to promote sustainability while supporting local farmers and producers.

Over the coming months, you will be able to read more in this newspaper about some of these initiatives from Canadian business and community leaders who are making the programs possible, and I am delighted to have been invited by The Globe and Mail to author this, the first in a series of leadership commentaries.

In a few weeks, Galen and I will be leading a group of Canadian supporters on a visit to Dumfries House in Scotland to see some of this work first hand. At the Dumfries House, which is in the heart of one of the poorest regions of Britain, the Prince has brought together many of his charities with a view to transforming a former private estate that had fallen into disrepair into a hub of employment, education and opportunity. In fact, this year marks ten years since the Prince led a consortium of organizations and individuals in a passionate campaign to save the house and its historic furniture collection for the local people and the country.

A restored manor house and its incredible collection of Chippendale furniture helps attract tourists, who in turn dine at the social-enterprise restaurant that the Prince's Trust operates as a hospitality training school for young people. Nearby, building apprentices learn traditional techniques while aspiring foresters trek out to manage the woodlands. The old home farm trains youth for careers in agriculture while supplying the local supermarket with fresh vegetables. Back in the restored walled garden, children learn about nutrition and tend garden plots while artists are given homes from which to develop their crafts. Altogether, the property has given jobs, inspiration and hope to an area all but forgotten after the closing of the coal mines.

It is my distinct privilege to chair the Prince's Charities Canada board of directors. As we look to Canada's 150th birthday celebrations and beyond, we look forward to building on our work to date, and continuing to support the Prince in his efforts to create meaningful charitable initiatives for the benefit of all Canadians.

Hilary Weston, CM, CVO, OOnt, is a former lieutenant-governor of Ontario, and founding patron and chair of the board of directors of Prince's Charities Canada, the Canadian charitable office for The Prince of Wales.

Opinion
Why some charities thrive and others struggle
January 3, 2017
Opinion
A lesson from Goodwill: Run a charity like a business
March 3, 2016 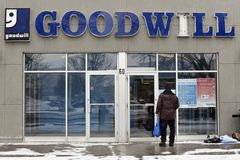