We now know what Brexit is all about. We know the big issue, the sixty-four thousand dollar question, the heart of the problem. It is Ireland.

No one expected this, least of all the Brexiters who told everyone that it was all about the rights of Britons versus the imperial yoke of the European Union. They told us that the U.K. was being robbed and its sovereignty undermined by European laws, European judges, bureaucracy, taxes and regulation. But last week a leaked document from the European Commission put the cat among the pigeons or, to coin a better metaphor, led Theresa May and the entire British cabinet knee-deep into an Irish bog.

The document, which sets out the EU's demands in relation to the border between Northern Ireland and the Republic, stipulates that the U.K. must commit to avoiding a hard border by remaining part of the EU's customs union and adhering to the rules of the single market within Northern Ireland. Britain must ensure no "regulatory divergence" from the EU Single Market and Customs Union, "necessary for North South co-operation, the all-island economy and the protection of the Good Friday Agreement."

The British had hoped that the troubling issue of the Irish internal border had been kicked into the long grass, at least until the big talks about the post-Brexit EU trading relationship had started.

No such luck, because Leo Varadkar, the Republic of Ireland's Prime Minister, or Taoiseach, has persuaded Brussels to play it hard, very hard. What Mr. Varadkar is proposing is a special free-trading status for Northern Ireland, a sort of Macao or Isle of Man, where the six counties of Northern Ireland form part of the EU for the purposes of commerce, trade and employment (everything that matters to most people) while remaining nominally part of the United Kingdom.

For Ms. May, this is nightmare territory because there is no chance that the Democratic Unionist Party, the diehard conservative Ulster unionist faction, whose MPs are propping up the Tory government in Westminster, will agree to any deal that undermines the integrity of their precious union with Britain, even a lightweight commercial border.

In a bid to stop the Irish government from pushing the envelope, David Davis, the Brexit Secretary, quickly ruled out the EU's demand on Northern Ireland, stating that nothing should undermine the "constitutional and economic integrity of the United Kingdom."

Unfortunately for Mr. Davis, the Brexit envelope is now stretching to the point of bursting. Brussels has now junked the British government's notions of using digital technology to monitor traffic along the hundreds of roads and farm tracks which cross the internal Irish border. It was always unfeasible even assuming that Irish nationalists left intact the network of roadside cameras needed to create a digital border.

Timing is critical in these negotiations with the Brexit deadline looming in March 2019, the date at which the U.K. will fall out of the EU without any trading arrangement unless a deal can be agreed. Last Friday, Michel Barnier, the EU's chief Brexit negotiator, said Britain had two weeks to come up with an offer on the three conditions precedent to the start of the trade talks, for which Britain is impatient. The conditions are the divorce "bill" which the U.K. will pay, citizens' rights and the Irish border. Most commentators have latched on to the issue of money (the EU reckons that some €60-billion is owed) as it is a red rag to Brexit enthusiasts. Yet, the divorce bill is a red herring: Money is always negotiable and payment can always be delayed. As in a real divorce, the bread and butter issue is human – what future for the children – and the British government has shown shocking disregard for an island full of people over which it exercised dominion for centuries.

It is a terrible irony that free trade is now the issue that once again divides Britain and Ireland.

It was Britain's corn laws, a restriction on free trade introduced to protect English farmers in the 19th century, that created the conditions in which an Irish potato blight turned into a famine that killed one million and pushed at least a million more to emigrate to America and Canada.

Mr. Barnier gets it even if the British government remains ignorant of its own history. That is why Mr. Barnier is listening to Mr. Varadkar. Mr. Barnier knows that Brexit will harm Ireland just as it will harm the U.K. and he is pushing Ireland on to the front of the stage in order to show Theresa May's government just how threadbare her strategy really is. 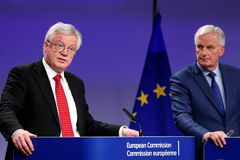