As epic business tales go, this one has it all: Guy Laurence is brought in from the U.K. to take over Canada's leading telecom just five years after the company's founder, Ted Rogers, dies. He shoves aside the old guard, brings in new talent from Google, threatens executives, charms the rank and file, and promises shareholders the world.

The numbers start to improve, and Laurence believes he's won over Edward and Melinda, Ted's kids and key members of the controlling Rogers family. But behind his back, the board members are secretly plotting against him. Then one Sunday, he's called into a meeting where he's knifed in the back and kicked out on the street.

It's been just over seven months since Laurence retreated to his Rosedale mansion to lick his wounds. Rogers's new CEO, Joe Natale, has finally been installed, and the Rogers family would probably rather we moved on. But there's some baggage here that still needs addressing, lest Rogers find itself caught in a terminal holding pattern.

Before joining The Globe and Mail in mid-2015, I worked at Rogers for 11 years. I was at the company when Ted died and Nadir Mohamed took over. I was there when he left five years later, amid rumours he found it hard to run things with the Rogers family on his back. Ten months later, this Brit came along to fix a company that, by then, had hit a plateau.

Soon after he started, Laurence invited me and a dozen other media types to a fancy three-hour dinner at a Toronto restaurant. He was combative, gregarious and a lot of fun. The wine flowed freely, and he alternated between grilling us on the Canadian media scene and entertaining us with remarkable stories. He made careful notes in a little black book, and promised he would prevail over stodgy middle management and give Rogers a fresh start.

So what went wrong? This issue's cover story attempts to answer that question. It's important, because as a public company, Rogers is supposed to put shareholders first. If Laurence was fired because he wasn't delivering, we should applaud the board. If he was fired for personal reasons—because the Rogers family and its supporters felt he didn't respect the company's history—then we have a problem.

Ted himself made the decision not to put Edward or Melinda in charge of operations. But he did create a family trust that controls 91% of voting shares. So the people ultimately controlling the company are not beholden to shareholders at all.

As a shareholder, that makes me nervous. As CEO, it would make me crazy. I disagreed with a lot of Laurence's moves, but as of early May, shares were up 33% from when he started. Given that it takes a bit of time for a new CEO's strategy to hit the bottom line, it's hard to argue his performance was so awful it warranted canning him.

The biggest threat Rogers now faces is that the controlling family does the same thing to Natale. If he too is forced to run the company by consulting a Ouija board, Rogers is in danger of becoming a rather unremarkable utility. It will continue to generate a predictable stream of income from cable and wireless, but it will be about as exciting as Enercare, the company that rents out water heaters for a monthly fee.

If Natale is given a longer leash, Rogers could once again become an innovator. Getting there will require a CEO with vision and a penchant for embracing the new—rather than constantly looking over his shoulder. Rogers would once again be valued like a growth stock, rather than a blue-chip dividend spinner. I wonder which option Ted would have chosen? 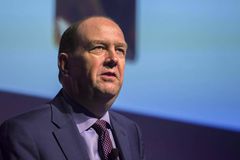