Clara Hughes was a wayward teen whose life changed after seeing Canadian speed skating legend Gaetan Boucher on television in the 1988 Calgary Winter Olympics. Since then, Hughes has made history of her own, becoming a competitive speed skater and cyclist, and winning six Olympic medals—the first woman to win multiple medals in both the Summer and Winter Games. But after finishing out of the medals in London in July, and turning 40 in September, it's time to move on. Where does she go from here? It's a complicated question.

Are you retiring now because you want to, or because you have to?
Oh, I quit. I don't think I'd even call it retirement—I just quit. The time was up. I knew it had been a pretty good run.

You've said, "This is it" before, notably before the 2010 Vancouver Winter Games. Do you mean it this time?
Oh yeah. I just turned 40 and some of my teammates this summer were 20. The sport I went back to—road racing—is really dangerous now. It's not an overstatement to say I was risking my life.

What were your expectations when you got into sports as a teenager?
All I really wanted was to be an Olympian and to do it for Canada, to wear that Maple Leaf. I never in a million years could have imagined I would go to six Games in two sports, or that it would become this crazy 22-year narrative that is my life.

What was the best part?
I loved the process of applying yourself to something, building your life around what's important to you as an athlete.

What was the worst or most challenging aspect?
I don't know if there's a worst for me. I went through depression after the 1996 Atlanta Summer Games because of sports. And I lost a teammate in 2000—Nicole Reinhart. We were on a professional cycling team together. She died after a crash. But when I look back, I don't know where I would have gone with my life if it hadn't been for sports.

How do you feel now?
I feel elation and joy that it's over, and I feel an incredible sense of satisfaction. It really hit me in London: Look at what I did! But London also reminded me just how damn hard it is to get to the Olympics and to compete for a medal. It had almost become normal for me, you know? This time I finished fifth, not because I didn't want it enough or didn't prepare for it, but because the others were faster.

What was your biggest mistake?
I've made a lot of mistakes, but they've helped to make me who I am, so I guess they're not really mistakes in the end, right?

What have you learned?
I learned through sport that you have to do what you love. My favourite quote is from Joseph Campbell: "Follow your bliss." That's also how I'm going to go through the next phase of life.

What will you miss?
I could say I'll miss being incredibly fit, but my husband and I just went on a three-week holiday, and we probably hiked 300 kilometres. I'll miss being at the highest level of physical fitness, but I won't miss pushing myself to get there.

If you could have any job in the world now, what would it be?
What I dream of is having the time, the opportunities and the energy to give myself to the things I care about. If I could be a full-time professional volunteer, that would be great.

What comes next?
This fall I'm going to Rwanda and Uganda for Right to Play—I'm on the advisory board. I'll also be doing tons of media as the campaign spokesperson on Let's Talk Day [for mental health awareness] on February 12. And I want to do cool stuff with my husband. Other than those things, I really don't know what the future holds.

What did you take from your workplace on the way out?
I didn't really steal it, because it's mine, but I actually kept all my Olympic clothing this time around. I usually give it all away to friends and family. But I knew this was the last time, and it was kind of cool, so I decided to hang onto it. 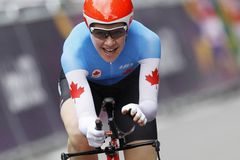 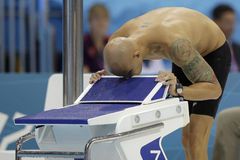