Okay, so you might never hear anyone utter the words, "as Canadian as canned tomatoes," but our domestic food manufacturing sector is worth upwards of $92-billion each year, and it's largely populated by small and mid-sized companies—like the six we look at here. 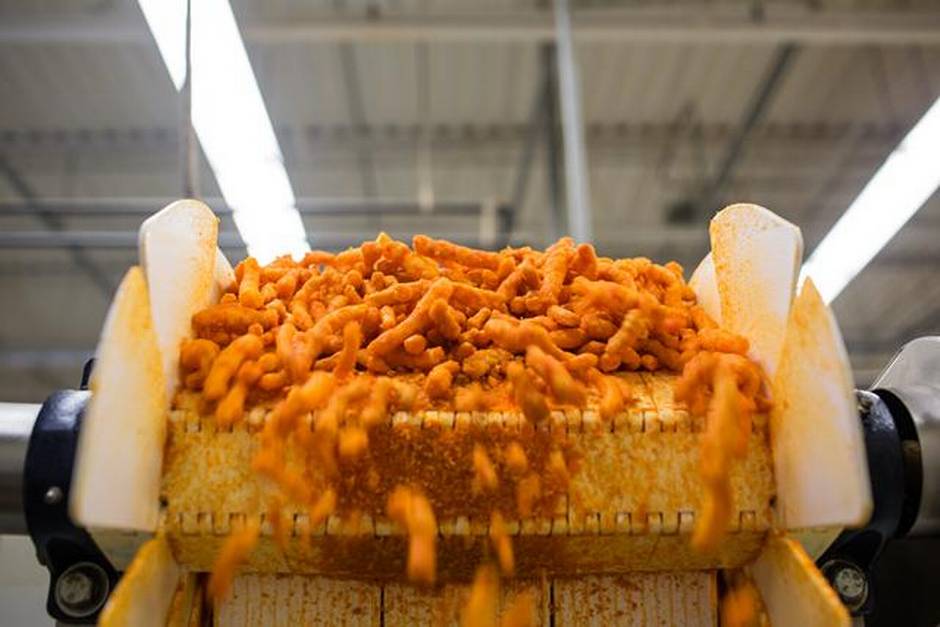 MICHELLE GIBSON / FOR THE GLOBE AND MAIL

No farmer is merely a farmer. He or she is also a mechanic, meteorologist, businessman, philosopher, crackpot and, perhaps above all, an inventor, constantly jury-rigging equipment in hopes of a bigger yield. Take Jim Marker. Around 1940, the Ohio farm-boy took on the ancient problem of cattle-feed spoilage. He devised a mechanical extruder that pressed cornmeal into rot-resistant cylinders. When Chicago-based W.T. Hawkins, owner of the world’s biggest snack-food company, heard about the device, he saw a possible human application.

The two men conceived a method of frying the cornmeal sticks in oil before coating them with aged cheddar cheese powder. The world’s first Cheezie was born. They were such a hit that an emerging potato-chip magnate named Herman Lay—yes, of Lay’s fame—offered Hawkins a 17-year contract for worldwide distribution. But Cheezies arrived on the market just as the rest of the Hawkins company was faltering. Bankruptcy forced the family to cancel the Lay’s contract and retreat to its lone Canadian plant. “Just think, if we’d kept that Lay’s contract, I could be on a big yacht right now,” jokes Hawkins president Kent Hawkins, grandson of W.T. “But we’re doing all right. We have everything we need.”

Today, the company distributes solely to Canada from its 70-employee plant in Belleville, Ontario, where Marker’s extruders crank out around 24 million bags of Cheezies a year. Not bad for a little farmyard ingenuity.
/Patrick White 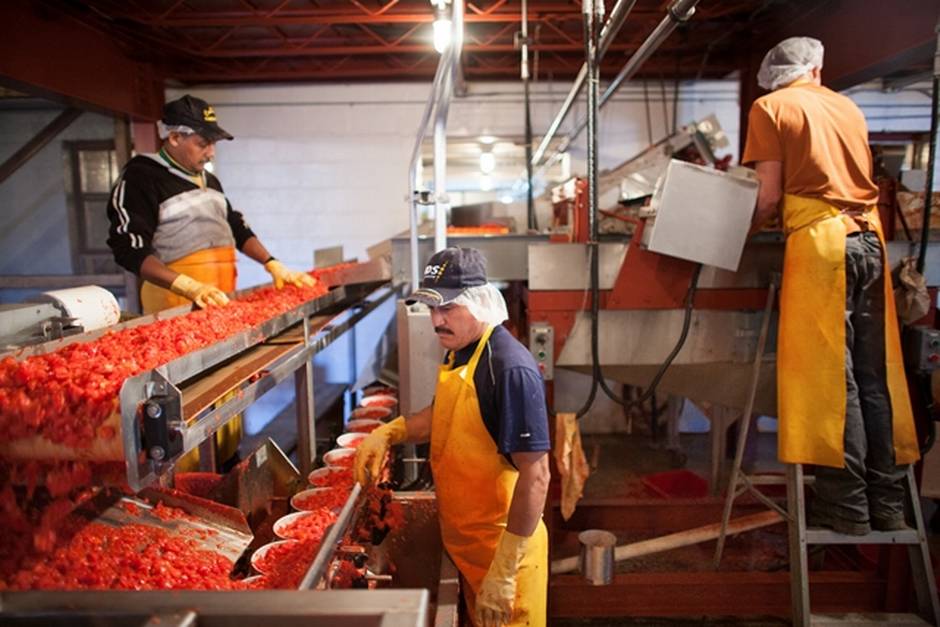 NICK KOZAK / FOR THE GLOBE AND MAIL

After H.J. Heinz Co. closed its tomato processing plant in Leamington, Ontario, earlier this year, a lot of unwanted tomatoes in the region went looking for a new home. They found it in Maidstone, Ontario, where Thomas Canning Ltd. has been operating since 1933 and is now ramping up exports to Asia and Africa. It isn’t easy making a can of tomatoes stand out on a crowded supermarket shelf, but the company relies on a time-honoured recipe: Offer organic tomatoes, play up the Canadian-grown angle and let consumers know that this is a mom-and-pop shop. “Organics is about smaller businesses,” says Bill Thomas, the third-generation president and CEO of the company founded by his grandparents. “It’s about the land and what you can return to it—and I think the idea of family fits into that very well.”

The organic tomatoes are grown by independent farmers in the southwestern tip of Ontario, in sandy fields largely around Essex, Kent and Lambton counties, without pesticides or synthetic fertilizers. They are processed and canned in the same region, without irradiation. Besides organic, the company’s Utopia Brand offers a range of tomato-based products—non-organic whole, diced and crushed tomatoes, tomatoes with basil, tomato paste, pasta sauce and even ketchup. Some are sold as private-label products throughout Canada and the United States. But more tomatoes are being shipped abroad, particularly as Thomas Canning ramps up production with a new facility—part of an effort to triple the company’s output.

In April, Thomas Canning struck a deal with Nigeria’s Festrut Group to export $25-million worth of whole and diced non-organic canned tomatoes, giving the Canadian company access to a huge market that is already familiar with the vegetable. Expansion into China is trickier: China is the world’s largest tomato producer, even though tomatoes aren’t a big part of the local diet. But the company has carved out some market share there by offering smaller 14-ounce cans with labels that clearly identify the tomatoes as Canadian-grown—creating a touch of the exotic.
/David Berman 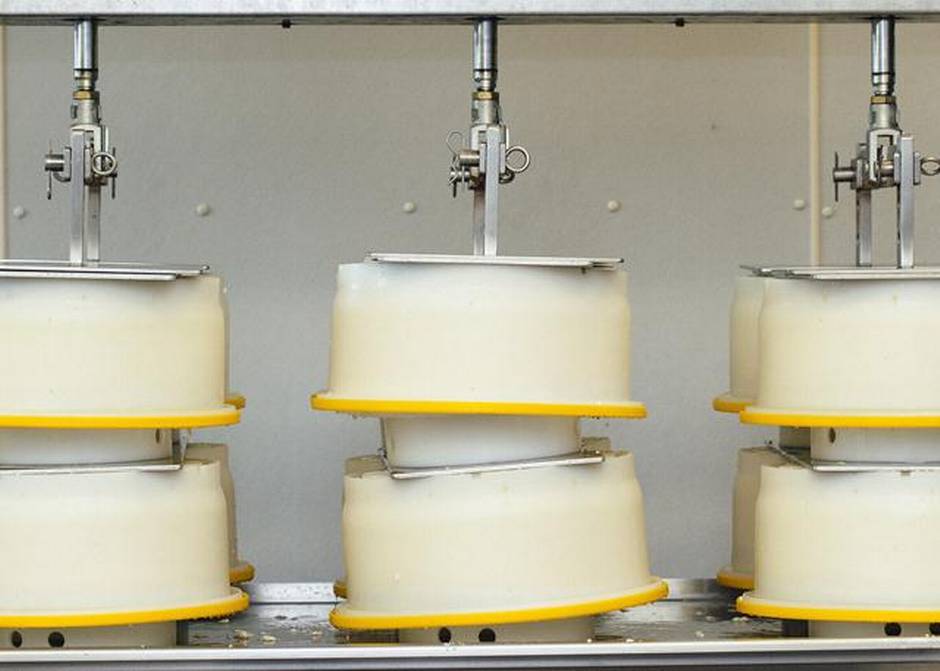 ALEXI HOBBS / FOR THE GLOBE AND MAIL

Thunder Oak owner Walter Schep’s great-grandparents were cheese-makers, and probably his great-great-grandparents, too. He’s lost track. The tradition was passed down to his parents, who lived in the Dutch city of Gouda. Schep’s parents immigrated to Ontario in the 1980s and started a dairy farm in Thunder Bay. In the ’90s, after purchasing a cheese-making kit on a trip to Holland, Schep’s father tried making Gouda with the milk from the family farm. “It’s the cheese we always ate, and it’s the cheese we knew how to make,” says Schep. “We started making it twice a week and now we’re up to five days a week. We’ve reached full capacity at our current facility, so we’re building a second location down the road to make more cheese.”

Gouda’s creamy texture and mild flavour make it easy to sell to those who have just started the journey to becoming serious turophiles. Some of these cheese-lovers make the trip across the U.S. border, a 30-minute drive from Thunder Oak, while aficionados from Australia, Japan and Greenland have also found their way to the farm. This past summer, Schep sold so much cheese to tourists that he was forced to cut off distribution to his Toronto customers. “It’s why we’re expanding and trying to find that balance between staying small and keeping enough customers happy that we can stay in business.”
/Karon Liu 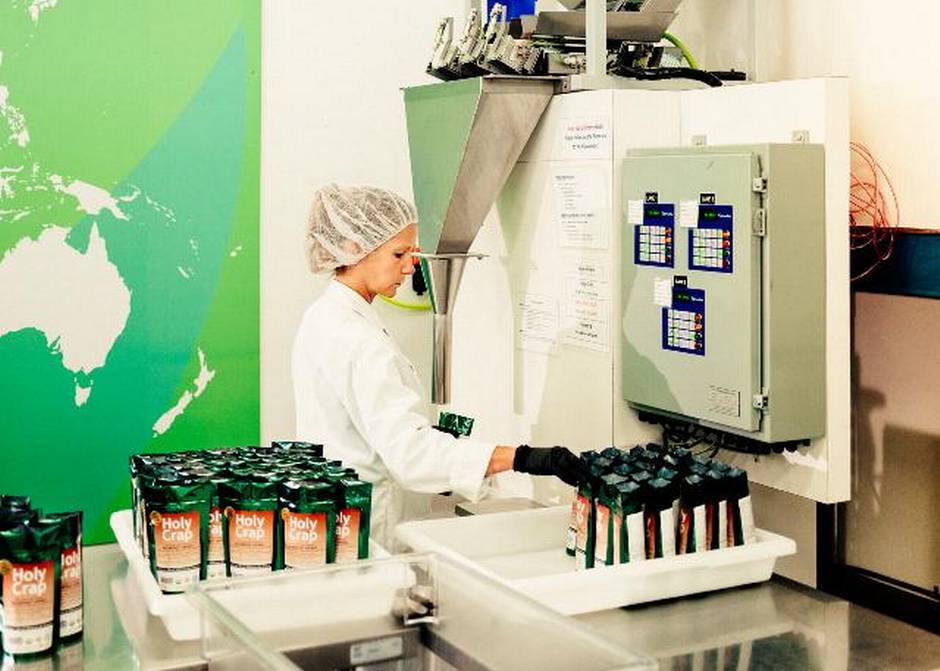 KAMIL BIALOUS / FOR THE GLOBE AND MAIL

"Holy crap, that’s good,” a customer exclaimed after tasting a breakfast cereal concocted by Corin Mullins. Four years ago, Mullins and her husband, Brian, were selling their crunchy blend at a farmers’ market in Sechelt, B.C. Now, they are posting nearly $25-million in sales and are in talks to create custom blends for luxury hotels.

The eye-catching moniker helped the company stand out in crowded supermarket aisles, but so did Corin’s cereal mix, with its limited list of ingredients: chia seeds, buckwheat, hemp seeds, raisins, dried cranberries and apples, and cinnamon. Corin designed the recipe to address her husband’s dietary restrictions but ended up tapping into the current multibillion-dollar obsession with all things gluten-free. Bolstered by the Vancouver Olympics—where thousands of international visitors tried the cereal at their Granville Island market stall—an appearance on CBC’s Dragons’ Den and a nod from Chris Hadfield (he had the cereal with him on the International Space Station), Holy Crap quickly became a serious contender on the breakfast table. “When people ask who our competitors are, I’d say McDonald’s,” says Brian. “What we’re talking about is getting people switching from a meat-based breakfast to a plant-based breakfast.”

While business is growing (they’re coming out with new blends like blueberry-vanilla and dark chocolate, as well as cereal bars), the couple intends to keep everything in Canada—from production, in the town of Gibsons, on B.C.’s Sunshine Coast, to the sourcing of grains. “Everything is done here at home,” says Corin. “Everyone in the company eats it, their families eat it, they’re proud of what they make.”
/Karon Liu 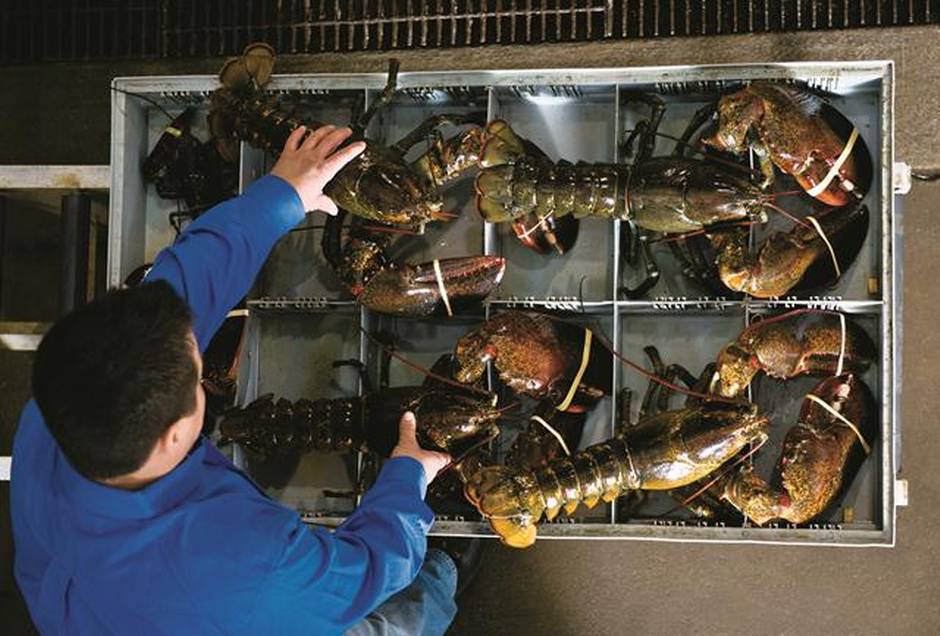 You have to hand it to Homarus americanus. As hardy as it is delicious, the lobster can tolerate a remarkably circuitous route from the ocean floor to the dinner plate—a journey that Clearwater Seafoods Inc., based in Bedford, Nova Scotia, perfected after teaming up with United Parcel Service Inc. in 1999. Today, UPS handles about one million pounds of Clearwater’s live, hard-shelled American lobsters a year, making the delivery operation a logistical marvel and ensuring fresh seafood year-round in key U.S. markets.

Lobsters aren’t typical packages, of course, and the key to keeping them alive and well lies in Louisville, Kentucky, where UPS has established an air hub known as Worldport. Nearby, Clearwater has built an enormous facility for holding lobsters in 70,000-gallon tanks, where, at any given time, 25,000 to 30,000 pounds of lobsters reside in plastic bins, sorted according to weight, from one-pound chix to extra-large three-pounders, and some even larger. Clearwater trucks replenish the tanks with new shipments every week from distribution centres in Nova Scotia.

The clawed creatures can thrive in the holding tanks for up to six months before boarding UPS planes in insulated containers, bound for restaurants in New York, Miami, Los Angeles and Las Vegas. That’s because the Louisville facility is far more sophisticated than the murky aquarium you might see at your local fish shop. This is state-of-the-art stuff, where water is filtered, chilled and aerated, mimicking the cold salt-water conditions where lobsters spend their natural lives. Clearwater also ships lobsters to Europe, Asia and South America, feeding a demand that rose more than 8 per cent last year, to $66.4-million—but the facilities in Louisville are unique to North American distribution and ensure a steady, fresh supply to the United States, among the world’s top lobster eaters.
/David Berman 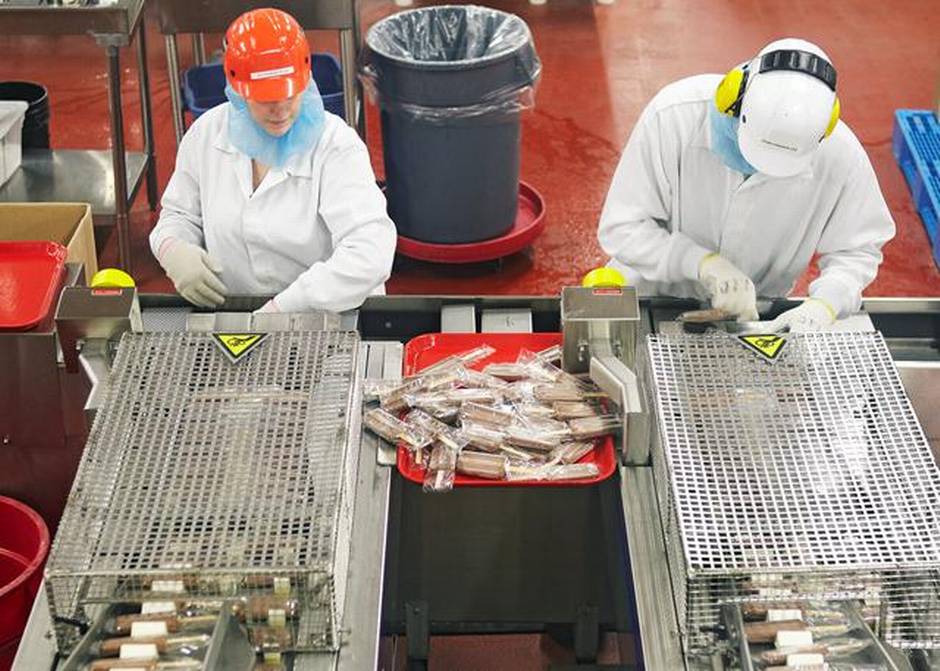 JEREMY KOHM / FOR THE GLOBE AND MAIL

If you grew up in Canada, chances are you can still remember the anticipation of opening a brick of Chapman’s Neapolitan ice cream—shaving your spoon over the surface so as to pick up a perfect ribbon of chocolate, vanilla and strawberry. The company’s repertoire has expanded hugely since 1973, when David and Penny Chapman bought an old dairy in Markdale, Ontario, on the cheap, with plans to make their own frozen desserts.

Even though the Chapmans have had numerous offers to buy them out, the country’s largest independently owned ice-cream maker has no plans to leave its little community of 1,400 people. “If we just took a big cheque and sold out, we wouldn’t know what to do with ourselves,” says Ashley Chapman, vice-president and son of the founders. “Money isn’t the only reason why we’re doing this. We want to support the local economy and fellow Canadians.”
/Karon Liu

After the H.J. Heinz company closed its tomato processing plant in Leamington, Ontario, a lot of unwanted tomatoes needed a new home. Nearby Thomas' Utopia Brand took on the task and is growing its tomato line, with its eyes set on expanding to China next.

Sherrill Sutherland takes us through the manufacturing process and growth plans for the company's tomatoes.