Just before I'm scheduled to sit down with Alex Johnston, she hastily e-mails to see if we can postpone the interview. It turns out that one of her three kids is home from school, leaving her scrambling to arrange child care. Although I regularly interview executives, it hits me that this is the first time the issue has come up. Most business leaders are men, and child care typically doesn't fall to them.

That divide is, in large part, the point of Johnston's mission. As the executive director of Catalyst Canada, she is tasked with promoting women in business—a campaign she explains a day later over coffee and tea at The Gabardine on Bay Street.

As far back as the 1980s, there were promises that women would rise up the ranks and get a fair shot at management and board positions. But very little has changed. A recent study found there are still more men named John running large U.S. companies than there are women in charge of them. (1)

To reignite the push, Catalyst invests heavily in research, education and events that address the concerns of working women. The global organization is best known for its accord requiring signatories to boost the percentage of women in their boardrooms to 25% by 2017 (the Canadian average in 2013 was 16%). To help, Catalyst suggests names of "board-ready" women.

Lately, the organization's Canadian arm has had reason for optimism. Provincial securities commissions just enacted a new rule that requires companies to detail their efforts to recruit and hire female executives and directors. The Big Six banks have also been aggressively naming women to their boards. In 2013, Royal Bank of Canada appointed former Four Seasons CEO Kathleen Taylor as its chair—a first at a major Canadian bank. In March, Goldcorp became the first miner to sign Catalyst's accord.

Johnston—a onetime Bay Street lawyer and chief policy adviser to former Ontario premier Dalton McGuinty—wants to make sure the current movement doesn't stall all over again. It's a cop-out, she says, for companies to establish one or two senior positions for women, and then move on. "We need to go beyond that. We need this conversation to be about pipeline development." That means execs must address the gender issue at all levels, from reassessing recruiting policies to ensuring more women are put up for annual promotions.

Johnston understands why leaders may prefer to rally around a cause like designated board seats. (2) Such campaigns can be quantified, allowing companies to demonstrate a quick return on their investments. What takes more legwork is clearing the way for more women in junior roles to get noticed. Instead of pushing companies to take on this task, Johnston argues we've taken the easy way out—telling women to "lean in."

"There's this very rich conversation happening right now about women and the things they need to do to progress through the ranks," she says—raise their hands more often, dress differently, be more forceful when discussing compensation. "It's very easy to say that if women would just do these three things, the labour pyramid would look totally different. That is not the conversation we should be having." True change, she says, involves altering daily behaviours. The recent gender discrimination lawsuit filed by Silicon Valley venture capitalist Ellen Pao (a suit she ultimately lost) highlighted a few examples, including men who discuss pornography in front of female employees or openly debate the attractiveness of other women in their industry.

That's not to say women shouldn't stand up for themselves. "There's no doubt that focusing on things women can do can be a net positive," Johnston says—but we really should be talking about systemic barriers. It's here that her outreach to male CEOs sometimes breaks down. A typical argument: Why work so hard to promote women when the company is already delivering shareholder value? Johnston's answer: If all your fellow execs are white men, there's no way you can be in touch with where the world is going. "Any time you're sitting around the table with people who have the exact same skills as you," she says, "that should terrify you."

Very quickly, you realize why Johnston has won over the likes of the Big Six bank CEOs—three of whom sit on Catalyst Canada's board. (3) She's realistic. And she doesn't simply point fingers at men and tell them to do better. Instead, she acknowledges that old-fashioned gender norms are deeply embedded in all of us. Flying back to Toronto from Calgary a year ago, Johnston heard a woman's voice come over the intercom. It was the pilot speaking. "My first reaction was: That is amazing. My second reaction was: I hope she knows what she's doing."

Despite these deep, even subconscious, ideas about gender roles, Johnston insists Canadian companies should be doing better. "We stagnated for 20 years," she says. "We don't have the luxury of continuing to say, 'It takes time.'"

2 Johnston sits on the board of Desjardins General Insurance, whose parent company is run by a woman, Monique Leroux.

3 The CEOs of Bank of Montreal, CIBC, RBC, McDonald's Canada, Linamar and BCE all sit on Catalyst Canada's advisory board 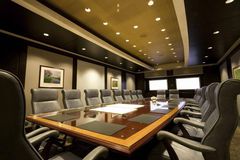 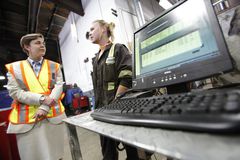