In the Gulf Coast, home of the U.S. refining industry, the long limbo of the Keystone XL pipeline matters less than you might think if you'd only followed developments in western states and Washington.

Refiners in Houston and within a 500-km radius of the world's energy capital are turning the U.S. Gulf Coast into the bottom of what is essentially a giant funnel of oil delivered by pipelines, railroads and river barges. If Canadian crude isn't coming via Keystone, the industry will find other ways.

The U.S. Midwest is the top initial destination for Canadian crude, as it is home to the U.S. crude futures and storage hub in Cushing, Oklahoma. In June, more than 70 per cent of the 2.8 million barrels per day of Canadian oil exported to the United States reached the Midwest, while about 5 per cent headed for Gulf Coast refiners.

But more is set to flow further south as alternative routes less direct than Keystone crop up. Gulf Coast refiners want Canadian crude, Canada wants them to have it, and middlemen are increasingly opening paths of least resistance. "The world has had to move on without it," Rusty Braziel, president of consultancy RBN Energy, said in August of Keystone XL. Keystone would complement four major cross-border pipelines that already carry Canadian crude to the U.S.

Heavy Canadian crude, or bitumen in its undiluted form, is practically tailor-made for the massive U.S. Gulf Coast refining complex, which has long been configured to run heavy Latin American crudes arriving by tanker. Thanks to its attractive prices and surging output, Canadian output is displacing crudes from Venezuela and Mexico along the Gulf Coast.

Refiners see Canada as a friendly, stable source of cut-price crude, unlike Venezuela or other oil-producing countries plagued by war or unrest.

What's more, Gulf Coast refiners have limited capacity for the growing flood of light sweet crude from shale patches in Texas and North Dakota. That surge has lifted U.S. crude output to a 25-plus-year high and put pressure on Congress to lift a decades-old ban on exporting crude.

While some refiners are making adjustments to run more lights, large-scale retoolings would cost billions and make little sense, since heavy crudes are usually cheaper than U.S. light-sweets.

Refiners also want flexibility to mix and match from the growing number of North American crudes, from Canadian heavy to light-sweets in North Dakota's Bakken shale, the Permian Basin in Texas, and more burgeoning oilfields in Oklahoma, Colorado and Wyoming. To that end, U.S. refiners and logistics companies are adding pipeline connections and terminal capacity along the Gulf Coast at a dizzying clip.

The more cheap crude they can get, the more the refineries can run at full tilt and maximize profits by exporting gasoline and diesel as domestic demand slips.

Linkages to move Canadian crude to the Gulf have already been built, and workarounds to Keystone XL are under way.

TransCanada split the original Keystone project in two so it could move ahead with its 400,000-bpd Marketlink southern leg, which runs from the Cushing oil hub to the Gulf Coast.

Seven new or expanded pipeline projects aimed at moving Canadian crude to the Gulf Coast are slated to start up by 2016, adding combined capacity of 2.5 million bpd. Those include the 450,000-bpd Seaway Twin, a Cushing-to-Texas joint venture of Enterprise Products Partners and Enbridge that is awaiting flows from Enbridge's 600,000-bpd Flanagan South Illinois-to-Cushing line later this year.

The Twin runs parallel to the original Seaway pipeline, which Enterprise and Enbridge reversed and expanded to 400,000 bpd from 150,000 bpd early last year to move Cushing flows south. Some of the crude transported in the original Seaway is Canadian, while the Twin will move most if not all Canadian.

Enbridge's plans to sharply expand its 450,000-bpd Alberta Clipper system, which moves Canadian crude to the company's U.S. system, is caught up in the same kind of permitting delays that have dogged Keystone XL. Now the company is contemplating the construction of a 140,000-bpd crude-train unloading terminal in Illinois to help fill Flanagan South and the Seaway Twin.

Other projects are already there. More than a dozen rail or rail-to-barge projects along the Gulf Coast and Mississippi River can receive a total of 1.2 million bpd.

TransCanada has said it might get into the rail game too. As an alternative to Keystone XL, Braziel of RBN Energy said that pipeline companies may build new lines to a rail terminal at the border, where crude would be transferred to a train.

Logistics behemoth Kinder Morgan Energy Partners this summer started up the largest of the Gulf Coast rail projects at its operations along the bustling Houston Ship Channel. Kinder's joint venture with Watco Cos. can take up to 210,000 bpd of crude from U.S. sources as well as Western Canada. "We will go bigger," says John Schlosser, president of Kinder's terminals division. "We have to stay ahead of our customers' growth. We want to be the destination of choice, so we will continue to grow."

Even as pipelines start up, rail will stay big for Canadian crude, logistics executives say. Canadian oil must be diluted to flow in a pipeline, but a heated railcar can carry pure bitumen. And demand for undiluted Canadian crude is growing. "That's the holy grail from Canada. It's what refiners want, and we're being driven by that," says Bart Owens, vice-president and general manager of GT OmniPort, a rail and vessel terminal in Port Arthur, Texas.

Rail terminal operators are increasingly installing heated pipes and boilers–portable or stationary–for bitumen. At GT OmniPort, which is next door to three major refineries and 150 km from many more, a portable boiler will hook up to the pipes and fill them with steam to melt the bitumen so it can be offloaded, Owens says. "It turns the thick stuff into thin stuff."

ROB Magazine
The real reasons for the Keystone gridlock
October 28, 2014 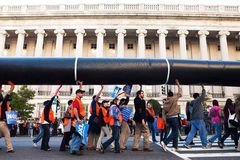 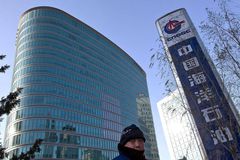 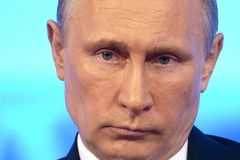