The first guy hired by Toronto's new baseball team in 1976 was a 31-year-old accountant. Paul Beeston started as vice-president of business operations, and was named president and CEO in 1989. He was at the helm when the Jays won the World Series in 1992 and 1993. Beeston then moved to New York and served as president of Major League Baseball (MLB) from 1997 to 2002.

In 2008, the Jays rehired him. The glory days did not return, however, and this past January, Beeston said he would step down at the end of the season. Then came a great career third act, as the Jays caught fire this past summer.

You were a successful accountant. Why did you join a baseball team that hadn't even played a game?
A lot of people questioned it. I was living in London, Ontario, at the time and had been offered a partnership at Coopers & Lybrand. I had a young family. But it was a no-brainer. I was never much of an athlete, but I was a big sports fan. Back in the 1950s, I'd go see the Tigers play in Detroit with my father. To come to the Blue Jays without even applying for the job? It was an easy answer.

How has the business of baseball changed?
When I started, it was more of a sport than a business. The year I joined the Blue Jays, we had a team budget of $780,000 (U.S.) in player salaries. Now the contracts are huge, and you've got new stadiums, network television deals, cable, merchandising and the Internet.

Toronto's old Exhibition Stadium was pretty rickety. Before you moved to the SkyDome in 1989, did you feel like you were running a major-league team?
It wasn't just the worst stadium in baseball, it was the worst stadium in sports. But it was ours, and we were quite proud of it. We had a great clubhouse, great offices. The seating wasn't so great. There were only 10,000 seats, the rest were all benches. The only covered area was the $2 seats way out in the outfield, which was the old CNE Grandstand.

You became president of MLB in 1997, but then resigned during negotiations with the players' union in 2002. Any regrets?
I don't regret one minute of it. We helped build the business of baseball there. The only thing that I really missed was that you couldn't really have a cheering interest for any one club.

You went back to the Blue Jays in 2008 on an interim basis, then you hired yourself as CEO. Were there no other suitable candidates?
I brought them three outstanding people—I'm not telling you who. For several reasons, none of them worked out. Then, at the end of the search, I was asked if I would just stay on. By this point I'd been back for about a year, I'd got to know the people here, I said let's give it a go.

Can Canada sustain even one Major League Baseball team?
The biggest challenge for this team is the Canadian dollar. It's as simple as that. We take in Canadian money and we spend U.S. money. When the Canadian dollar is down, it's hard on the bottom line.

Is it better for baseball in the Toronto sports market when the Leafs struggle?
I'm a Leafs fan. I agonize like everybody else does. But I believe you're better off if all of a city's teams are winning. Why wouldn't we want to be like Boston? Since 2000: three World Series, four Super Bowls for the Patriots, a Stanley Cup for the Bruins and the Celtics winning an NBA championship. When one wins, it puts pressure on the rest to do the same.

What would it mean to you if the Jays won another World Series as you head into retirement?
It would be fantastic. How could you not want to score the final goal in game seven in overtime to win the Stanley Cup, or hit the walk-off home run to win the World Series, and then say, "I'm retiring." 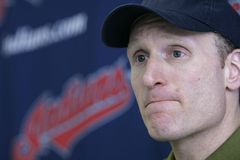 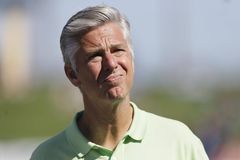 Blue Jays will return to Montreal for pair of pre-season games next year
September 18, 2015 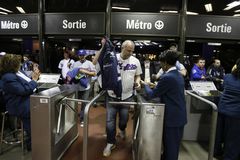