The new Blackfriars train station in London is a marvel. The airy cavern of glass and steel straddles the Thames River, giving passengers magnificent views of the city. If they look downriver, they will see St. Paul's Cathedral, one of London's best-known landmarks for more than 300 years. Clarification: They will barely see St. Paul's, for today Sir Christopher Wren's masterpiece is lost in a vertical jungle of skyscrapers, as if London were competing with Dubai.

Londoners have invented colourful names for their new towers, including the Gherkin, the Cheesegrater and the Walkie Talkie. The 310-metre Shard, the tallest building in the European Union, dominates the south side of the river. It is shaped like a skinny pyramid and is strikingly elegant.

Two of the most startling new towers have Canadian pedigrees. Not far from the Shard is the Strata, developed by an arm of Toronto's Brookfield Asset Management. It looks like an electric razor and is laughably hideous. In 2010, Building Design magazine awarded it the Carbuncle Cup, for Britain's ugliest new building. The Cheesegrater, officially named the Leadenhall Building, was co-developed by Oxford Properties, the property giant owned by the Ontario Municipal Employees Retirement System. The building at least appears to be stable. The Walkie Talkie is fatter at the top than at the bottom and looks like it could topple over.

The problem isn't modern architecture per se. When the modern complements the old, it can enhance a city—the Blackfriars station, the Sainsbury Wing of London's National Gallery and even the glass pyramid at the Louvre are all examples. But when the scale is enormous, and when it has no connection to the features that have given the city its personality for hundreds of years, it overshadows that city's character. The new look is bland and homogenized.

Charmless architectural style is one thing; incongruous location is another. The City, as London's traditional financial district is known, was, until recently, a warren of sturdy low-rise buildings that included guildhalls, Samuel Johnson's house and old pubs such as the George and Vulture, which counted Charles Dickens among its frequent boozers. Wedged in between were small squares and big, handsome buildings such as the Bank of England and Guildhall. The glass-clad behemoths are quickly eroding the City's character. Dutch architect Rem Koolhaas says the architectural style of cities is converging. Welcome to the generic city, to borrow his phrase.

London is not alone in the vertical sweepstakes. Toronto has hidden its waterfront behind a wall of look-alike condo towers. Paris is getting into the skyscraper game, as are other European capitals. Rome (where I live) is one of the few capitals in the world yet to be despoiled, as egomaniac mayors and property developers view very tall buildings as global status symbols.

Celebrity architects such as Renzo Piano, Frank Gehry, Zaha Hadid, Norman Foster and Daniel Libeskind are in high demand and pump out designs apparently aimed more at attracting attention, like Renaissance codpieces, than enhancing a city's traditional streetscape. Some of their creations are imaginative, stylish and practical; some are not, or are fine creations plunked at the wrong address.

The process of turning big cities into clones of Atlanta or Hong Kong can create more than freakish cityscapes. They create long-term problems. One is environmental. Sky-piercing buildings covered in glass windows that can't be opened require huge amounts of energy all year round for heating, ventilation and air conditioning. Energy prices may be falling, but at some point they will reverse course. Many old buildings in Europe simply rely on thick walls to repel the heat in the summer and retain the heat in the winter. Their windows can be opened to create a breeze, and ceiling fans do the rest.

Another big problem with modern high-rises is that they are single-purpose structures. Bank towers with enormous open trading floors wired to the fastest communications networks cannot be easily remade into housing, factories or shops. For the most part, they will have to be torn down when they have outlived their usefulness. In Europe, strong old buildings keep getting reinvented, century after century. An 18th-century monastery can be converted into a hospital, a church into condos, and a warehouse into an office.

But the main shortcoming of the skyscraper craze is the loss of urban identity. When I go to the City, I now go there because I have to. It's far more enjoyable to stroll through Kensington, Hampstead village or Chelsea. Millions of tourists go to Rome, Florence, Paris, Prague, Edinburgh, Berlin, Barcelona, St. Petersburg and London because, for the most part, they have not been "liberated" (yet) by towers that could have been designed on an Etch A Sketch. If these cities look like Dubai, who will want to go there? Not me. 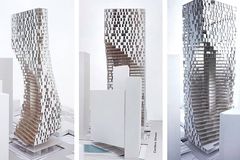 Toronto is building big. Now try beautiful
June 11, 2015
We should recognize Canada as a nation of highrise-dwellers
June 2, 2015 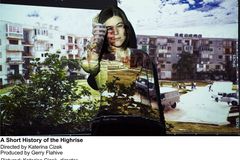