These companies are creating green energy from wind, water, sun and even — ahem — waste. 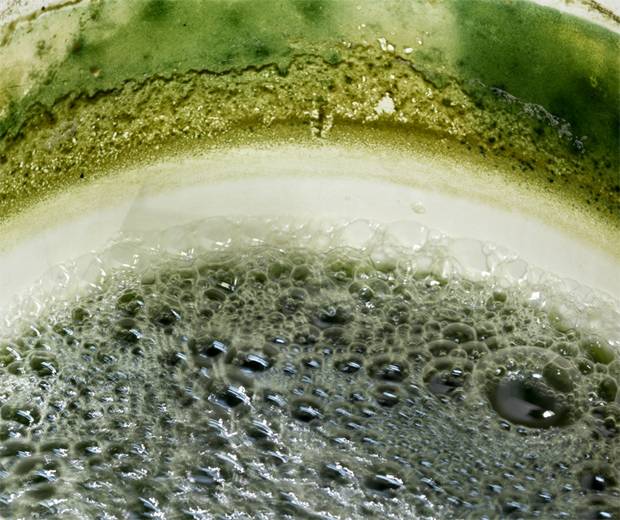 Inside each one of Pond Biofuels' bioreactors is a bubbling algae species. Each type is individually monitored and controlled to track its growth as it's fed different sources of carbon dioxide. Photo by Chris Thomaidis.

Pond Biofuels can trace its beginnings to President Jimmy Carter and the oil crisis of the 1970s. In the face of oil shortages, Carter launched an ambitious initiative to find alternative fuel sources. While most of the money was earmarked for more orthodox renewable energy programs like solar and wind, the U.S. Department of Energy spent $25 million (U.S.) trying to figure out how to grow algae that could be converted to fuel. It eventually cancelled the program in 1996 because the process was deemed uneconomical. A decade later, Steven Martin and Max Kolesnik, two Canadian chemistry graduates, decided to take the U.S. findings and finish the job.

Pond Biofuels sells a two-for-one environmental special: It intercepts raw smokestack emissions full of CO2 before they are released as pollutants into the atmosphere, and uses them to create an algae bloom that can be converted to fuel. While the idea is simple, the mechanics are complex: The noxious gases are fed into massive vats, or bioreactors, of microalgae that grow at a ferocious rate when exposed to optimal conditions and LED lighting—on average, every tonne of CO2 yields 0.55 tonnes of algae. The algae are harvested, pressed into a substance that looks like green toothpaste, and then dried in brittle sheets that break into pieces the size and consistency of cornflakes. Further chemical steps can turn the biomass into biocrude oil, biodiesel or ethanol, all of which come very close to matching the heat output of coal. (The green goop may one day also be used as feed at fish farms or for animals, especially as a protein supplement for piglets.)

Pond Biofuels’ goal is to develop a commercial plant capable of processing tens of thousands of tonnes of CO2 each year. On a large enough scale, this process could produce sufficient energy to replace the fossil fuels that are used in most manufacturing and transportation, Martin says. The company’s pitch has been good enough to secure $13 million in government and private funding. It will need to raise a lot more to move from pilot phase to commercialization.

For now, Pond Biofuels is running two test projects in Ontario, tapping the emissions of St. Marys Cement and U.S. Steel Canada to feed multiple 8,000-litre bins of hungry microalgae—and some very large hopes for a new era of biofuels. 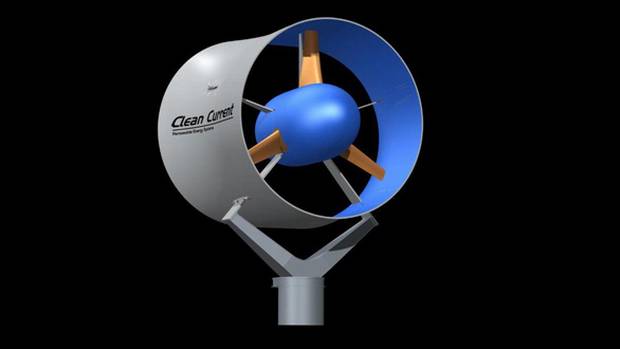 Clean Current's 3.3-metre tidal turbine can generate power from the bottom of a riverbed or from a platform mounted at the water's surface.

Some 175 remote communities across Canada, most of them outposts in the North, rely on diesel generators to power their homes and businesses. Besides being big polluters, those generators use expensive fuel. What if the communities could get the same power using quiet, reliable, renewable technology that generates electricity at about half the operating cost? That’s what Vancouver’s Clean Current Power Systems is striving to make happen, with river turbines. It’s not quite as easy as just plopping one on a riverbed and hooking it up to the local power grid, but that’s the idea, says Clean Current president Christopher Gora. The turbines are designed to be extremely reliable, so they don’t have to be pulled out of the water for maintenance. Clean Current seals each generator component individually, using a patented coating process to waterproof them. The company’s eight employees make those critical components, while the blades and foundations come from local suppliers, and the bearings and magnets are imported from Germany. The turbines come in various sizes to match river depths—the deeper the water, the bigger the turbine—and are designed to minimize any disturbance to marine life.

One of the company’s turbines is installed at a test site in the Winnipeg River in Manitoba, where it will pump out enough power to supply about half a dozen homes. The potential market for river turbines is $400 million in Canada alone, says Gora, but there’s also a huge possible market in saltwater applications. A new ocean-worthy model, which swivels to handle two-way currents, will be tested in the tides of the Bay of Fundy starting in 2015. 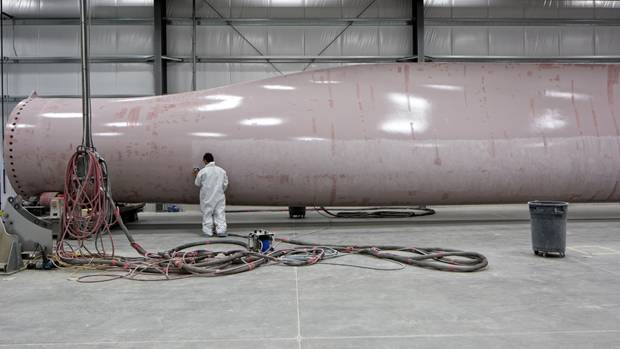 This blade, being prepared for finishing at Siemens' Tillsonburg facility, will eventually sweep through the air as part of a massive turbine array. The blades come in two lengths: 49 and 55 metres. Photo by Chris Thomaidis.

For anyone remotely familiar with the Stompin’ Tom Connors catalogue, Tillsonburg, Ontario, summons images of grinding labour and an old-world economy. “Till-sonburg! My back still aches when I hear that word,” the late country singer crooned about a tar-soaked day spent picking tobacco in this town southwest of Toronto.

So what would old Tom make of the 253,000-square-foot Siemens wind turbine blade factory now located five minutes outside town? Would his stoop straighten a little at the sight of 300 locals working green-economy jobs? Would that ache vanish as he listened to them talk about the structural properties of woven fibreglass and optimal airfoil profiles? What would he think, watching the curvy white blades sliding through town on flatbed trucks—sleek slabs of engineering triumph?

Four years ago, the German behemoth moved into an abandoned Magna auto-parts factory, lured in part by the province’s Green Energy Act. Workers pour each blade as a single mould of fibreglass-reinforced epoxy and balsa wood, eliminating the weaknesses and extra weight that come with bonded joints. At 55 metres, the longer of the two types of blades made in Tillsonburg sweeps 10,000 square metres—an area the size of two football fields—in winds as slow as 11 kilometres an hour. After a sluggish start, orders have come pouring in.

Jacob Andersen, head of Siemens’ Canadian wind business, says the Tillsonburg operation will be running full-tilt for the next two years, filling orders for 200 turbines in Ontario alone. Beyond that, opportunities abound. Wind fulfills 3% to 4% of North America’s energy demands. In Andersen’s native Denmark, the figure is closer to 30%. One thing’s clear: This ain’t Stompin’ Tom’s Tillsonburg anymore. 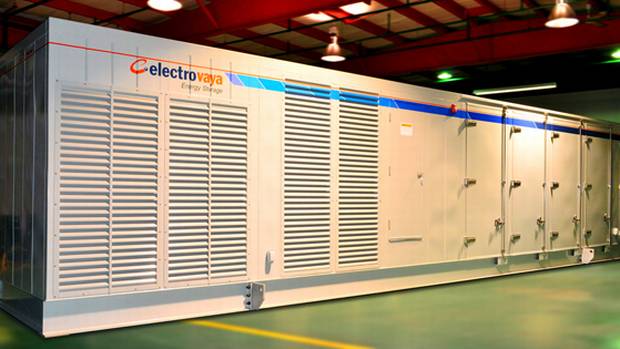 This trailer-size battery is part of a smart-grid project with Hydro One, Toronto Hydro and Ryerson University.

To truly fulfill the promise of green energy, producers are going to have to find a cheap way to store all that power for times when the wind isn’t blowing or the sun isn’t shining.

The global energy storage market is expected to be worth as much as $230 billion by 2020. So far, tiny Canadian battery firm Electrovaya expects to capture $15 million of that in 2014, but it has big plans.

The company has already built batteries for laptops, cars and ferries, and it is now scaling them up into trailer-size units to store power for utilities. The key to competing with rivals like Samsung and Panasonic (which, in February, announced it would work with Elon Musk to build a so-called gigafactory producing lithium-ion batteries) is to be small and nimble, keep costs down, and make sure your technology is at the leading edge, says CEO and co-founder Das Gupta.

An electrochemist, Gupta and his partner, solid-state physicist Jim Jacobs (son of urban activist Jane Jacobs), set up their first plant in Toronto’s urban core in the late 1990s. The site was surrounded by small businesses and homes, and they realized they would have to avoid using the smelly chemicals traditionally poured into lithium-ion batteries.

Electrovaya’s toxin-free production process, along with technology that squeezed more energy into a smaller space, has garnered the company more than 150 patents and has given it a toehold in a tough but huge market.

Its clients include a Norwegian ferry company, a Chinese automaker and a British electrical utility that is buying more than two dozen large-scale power-storage systems. 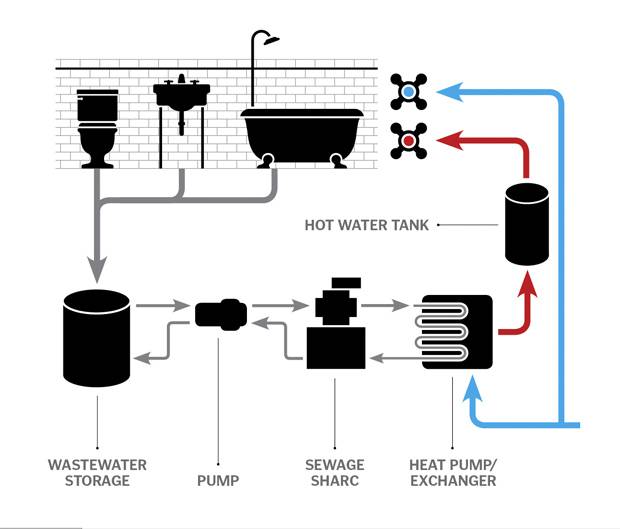 It bugged Lynn Mueller that every day he turned on his tap and flushed his toilet, he was sending $10 to $20 of heated water into the sewer. So, four years ago, the ex-refrigeration mechanic—who was selling geothermal heating systems at the time—created a system to capture and reuse that wasted heat. His International Wastewater Systems developed technology that works like a car’s radiator, but in reverse: After the warm waste water (0 C to 25 C) is flushed down the drain, it is routed through a heat exchanger.

Mueller’s real innovation, though, is a special filter that temporarily removes the solids—yes, that would be poo—from a building’s waste water, leaving it just clean enough to pass through a heat exchanger without clogging it.

The water’s warmth—about 40% to 70% of the heat is recovered—is transferred to an incoming flow of clean water, sharply cutting the cost of heating the hot water in a building.

The novel technology is now installed in two condominiums and a community theatre complex in Vancouver, with dozens more systems in the planning stage around the world, including one for a hospital in the United States and another in Britain. In February, International Wastewater opened a British division, and it is now looking to tackle markets in continental Europe and Australia.

While price isn’t usually an issue—on average, cost savings cover the expense of the technology in three to five years—clients are concerned about smell and contamination. Mueller insists that “it’s a completely sealed system. There is no smell whatsoever.” 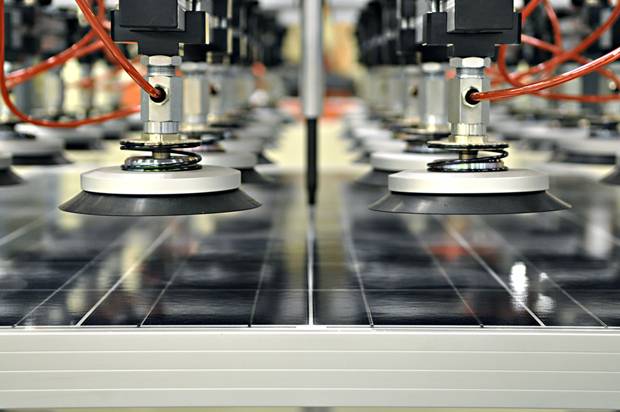 In their white lab coats, hairnets and blue latex gloves, the technicians could be mistaken for a group of surgeons on their way to the operating room. Instead, hundreds of employees at Celestica’s Toronto manufacturing hub (which employs a total of 1,500) bustle about the cavernous factory, layering solar cells, each no bigger than a sheet of paper, onto long lines of panels. They are assembling solar modules—one million and counting—the fundamental building blocks of the ever-expanding North American solar grid.

Until recently, Celestica was best known as a contract manufacturer for the electronics industry, with products ranging from servers and telecom gear to smartphones and aviation equipment. But several years ago, market conditions drove Celestica to reimagine its 64-acre Toronto manufacturing operation. “We looked at the capabilities of the site rather than the potential products,” says Michael Andrade, who oversaw the project and is now responsible for the renewable energy portfolio. The company was able to parlay the discipline it learned developing electronic products with short life cycles into an advantage in the oversupplied solar market—renowned for cutthroat competition from low-cost jurisdictions like China.

The expansion proved a shrewd move: The following year, Celestica lost one of its biggest customers, BlackBerry, and with it, hundreds of millions in expected revenue. The company’s customers now include Recurrent Energy—an American unit of Sharp Corp., which is building more than a dozen solar power plants for the Ontario Power Authority—and Lumos Solar of Colorado, which sells customized solar modules that can be integrated into awnings, carports and walkways.

Celestica’s ongoing mission is to differentiate itself in the market by building integrated solar products that go beyond just capturing energy to converting and storing it as well. The future will be all about boosting the efficiency of solar panels. As the cost of solar electricity becomes equal to—or even less than—that of conventional power sources, demand will surge and the real race among manufacturers will be on, Andrade says. Translation: Expect Celestica to start setting up solar shops globally.