Sometimes the most surprising aspects of a story never make it to the printed page. Such is the case with the cover story on Tim Hortons, which appeared in the most recent issue of Report on Business magazine, and where the story-behind-the-story provides a glimpse into the shifting dynamic between big business and the press in an age of fake news and corporate spin.

For subscribers: Inside the brutal transformation of Tim Hortons

Tim Hortons used to be a Canadian company with an open and folksy image, but it's been pretty quiet since it was taken over in 2014 by Brazilian global private equity firm 3G Capital. Over the past couple of years, we began hearing through various sources that Restaurant Brands International (RBI), the majority 3G-owned public corporation that runs Tim Hortons, had swept in like the second coming, firing most of the old guard and bringing in a new crop of young, fresh-faced MBAs.

To find out what was going on, we enlisted The Globe's award-winning retailing reporter, Marina Strauss, who boasts nearly 40 years of experience. She started at the top last October, requesting interviews with Elías Díaz Sesé, the new president of Tim Hortons, and Daniel Schwartz, the youthful and brilliant CEO of RBI.

The two-month-long exchange that followed was strange, to say the least.

At first, all we got were bland corporate brush-offs from the company's media-relations account. Our reporter persisted and was eventually told interviews would be set up, but not until after the American Thanksgiving, near the end of November.

In the meantime, we did get an interview with a more junior executive, plus a few franchise owners. But when we asked some basic questions about the executive's age, wife and kids, we were told that we weren't allowed to include any "personal" information in the story, and they shut us down.

What followed was a long and ultimately fruitless round of bargaining for access. They wouldn't make their senior executives available unless we agreed to censor all "personal" information from on-the-record interviews. They cancelled an interview with their head of store operations by e-mail just one hour before it was to take place (our reporter was half way to Hamilton, Ontario, when she found out). In the end, both their president and CEO refused to answer any questions at all, even by e-mail.

You may be thinking: Well, it's a free world. If they don't want to talk to the press, they don't have to. But there is a larger issue here about the duties of a large, publicly traded corporation—one that relies on the goodwill of Canadian consumers to produce its prodigious cash flow.

Such corporations are ultimately owned by their shareholders, but senior management often takes the view that it's their company and they don't have to explain their actions to anyone. They provide the absolute minimum in legally mandated communication. Beyond that, they feel no need to explain what they're doing, or why.

My question to them is this: If you have intelligent executives with a solid business strategy, then why not allow them to stand up and defend it rather than playing games? Asking whether RBI's zealous cost-cutting could damage the long-term viability of the Tim Hortons brand is not an unfair question. It's the kind of question business magazines should be asking. In fact, it's the kind of question a more reflective and experienced management team might be asking itself.

I think the story we produced is a great read—but it would have been better if RBI's executives had talked. They may have excellent reasons for doing what they're doing to Tim Hortons, but if they won't share them, we'll never know. 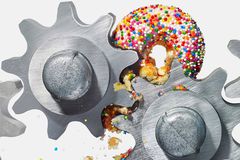