In a rapidly changing broadcast environment, Rogers Communications Inc. is counting on Canada's passion for NHL hockey to keep viewers – and advertisers – hooked on TV.

As Ottawa puts pressure on television distributors to offer more choice when it comes to cable subscriptions, Rogers is positioning its Sportsnet properties to be the go-to channels for Canada's national pastime.

The company has been aggressively building the Sportsnet brand, with a massive rebranding, a new magazine, an expanded digital presence, the acquisition of competitor the Score and an investment, in partnership with BCE Inc., in Maple Leaf Sports and Entertainment.

Now, with a $5.2-billion commitment to become the marquee media partner of the National Hockey League in Canada, the cable and wireless giant is making a big bet that the country's national sport will drive growth in its media business – and shore up its position in the growing battle for TV and mobile subscribers.

"One of the things that we're all looking forward to is offering Canadians more choice, more flexibility," Rogers chief executive officer Nadir Mohamed said on Tuesday. "And that leads to the whole industry question of, we'll call it à la carte, moving towards pick and pay. It's a world we're very supportive of – but frankly, a world that will evolve over time."

A move toward pick-and-pay pricing would pose a challenge to all cable networks. Rogers' flagship Sportsnet channel currently has 8.8 million subscribers, while BCE-owned competitor TSN has 9.2 million. But some question whether those subscriber numbers are skewed, owing to the fact that both channels are bundled together in basic cable packages, according to one analyst who asked not to be named.

"The question everyone's asking is, is that the natural penetration for these two channels? … There is a theory that the penetration in a pick-and-pay [environment] goes down," the analyst said. "You have to make sure you're offering what households want to see, in the event you get into a pick-and-pay world."

With the right content, however, there is a greater chance that consumers given a choice will choose to pay for the channel. With this deal, Rogers can cherry-pick the best games to broadcast on its networks, driving viewership.

"In this changing environment, compelling content that resonates with consumers, that's available on multiple platforms and on any device, that's where you're going to be successful," Rogers Media president Keith Pelley said. "And unequivocally, we have the most compelling content in Canada."

Access to NHL content also puts the power in Rogers' hands to go to competing TV distributors and demand higher fees to carry the channel. "Without a doubt," those fees will go up, said Brian Cooper, CEO of sports marketing consultancy S&E Sponsorship Group.

Rogers pulled in $152-million from Sportsnet subscribers last year, whereas TSN contributes $242-million to BCE's bottom line. According to Credit Suisse analyst Colin Moore, TSN's fees per subscriber were roughly 50 per cent higher than Sportsnet's in 2012.

Subscriber fees will become increasingly important as channels are unbundled and as consumers turn to so-called "over-the-top" services such as Netflix, Credit Suisse media analyst Colin Moore wrote in a research note on Tuesday.

For marketers, Rogers will provide one-stop shopping for multiplatform advertising connected to NHL content. Beginning with the 2014-2015 season, marketers will be able to buy a campaign that goes across television, radio, magazines, the Web, and mobile devices. Rogers will not only control the ad space on its own channels, but also during the CBC's iconic Hockey Night in Canada broadcast.

"If you're a partner that wants to reach Canadians watching national hockey, we're the place to come," Rogers president of broadcasting, Scott Moore, said in an interview. "We can take Scotiabank, we can take Tim Hortons, we can take any of the partners of the league and spread their message amongst multiple platforms."

Hockey matters for advertisers, not just because it is akin to a national religion in Canada, but because live sports content is less vulnerable to DVR technology that allows viewers to fast-forward through more advertising than ever before.

Rogers is hoping for a 15- to 20-per-cent bump in viewership for Saturday night hockey because there will now be hockey to watch. But the company is expecting only "very modest" increases in TV advertising revenue at first, Mr. Moore said.

The bigger opportunity is in building relationships with marketers by offering them multiple nights of hockey and on different devices, from one media company. Mr. Pelley has built this on the same model he used when he was the head of the broadcast consortium for the Vancouver Olympics – which he claims brought in four times the advertising revenue of any other Games in Canadian history because of its multiplatform coverage.

"Hockey was sort of split up," S&E Sponsorship Group's Mr. Cooper said. His company works with NHL sponsors including Bank of Nova Scotia and Canadian Tire Corp. Ltd. "Now for regional, for midweek national, for the Canadian teams, for jewel events, they go to one spot. …It's one-stop shopping." 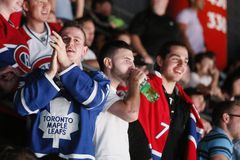