The British telecom executive, who took over from Nadir Mohamed in December, said on his first conference call Wednesday that he was not happy with the fourth-quarter numbers and plans to bring a new strategy to the board by May. Rogers disclosed a 1-per-cent drop in quarterly revenue, to $3.24-billion, and poor sales in wireless, its most profitable line of business. Rogers added 34,000 postpaid wireless subscribers, compared to 120,000 for BCE Inc.

"With respect to the results of Q4 and certain of the trends, while there are areas of strength overall, they are not satisfactory to me and over time I expect to do better," Mr. Laurence said after Rogers posted a 20-per-cent fall in adjusted profit.

"We slipped in terms of our growth rate relative to our peers and we need to execute in an even more methodical and disciplined manner ... and look at ways to close that gap," he said.

The results underscore the challenge facing Mr. Laurence, the former Vodafone executive who has been crisscrossing Canada meeting employees, external stakeholders and customers as he tries to plot the company's next wave of growth and break down the its internal bureaucracy. Rogers has more wireless customers than BCE or Telus Corp., but also loses them more quickly in part because of problems in customer service.

Churn – the rate at which customers leave – fell to 1.34 per cent in the fourth quarter, compared with 1.4 per cent a year earlier.

He gave little clarity on what that plan is likely to entail, or even how his fact-finding trip is going, beyond saying that he has held 22 town halls and conducted hundreds of hours of interviews. Asked by a reporter if he's been surprised by anything he's seen on his trip so far, Mr. Laurence said there have been two shocks: "The welcome from Canadians has been warmer than I expected and the weather has been colder than I expected."

Part of the weakness in wireless was caused by lower-priced roaming plans and simplified sharing packages the company offered, a reflection of the heated competition for wireless customers.

"We believe expectations were low heading into results, but we believe the release is still lower than expected," Barclays Capital analyst Phillip Huang said in a note.

Canaccord Genuity analyst Dvai Ghose said in a research note Wednesday that blended average revenue per user (ARPU) in wireless was $58.59 in the quarter, down 3.1 per cent and below his estimate of $59.57. That compares with a 2.1 per cent rise at Bell Mobility and an estimated 0.5 per cent increase for Telus Corp., which reports its quarterly results Thursday.

Rogers' cable television business is also suffering from low growth, as revenue was up just 2 per cent in the quarter. Together, cable and wireless represent nearly 85 per cent of the company's revenue.

Revenue in the business solutions and media divisions was up 11 per cent and 4 per cent, respectively, in the quarter.

Rogers also said on Wednesday it is raising its annual dividend 5 per cent to $1.83 per share from $1.74. The company has also renewed for one year a $500-million share buyback plan.

The industry's transition to two-year plans from three-year plans may have slowed wireless subscriber growth over the past two quarters, after the adoption of the federal regulator's wireless code, which effectively bans new three-year plans. Meanwhile, the number of Rogers wireless customers with smartphones rose to 75 per cent of the postpaid base from 69 per cent last year.

With files from Omar El Akkad 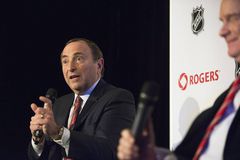 Why Canada’s wireless industry may have finally shifted in the customer’s favour
May 11, 2018 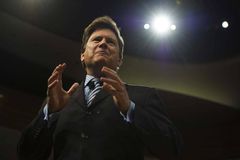 Bell to broaden Fibe TV service after strong quarter
May 11, 2018 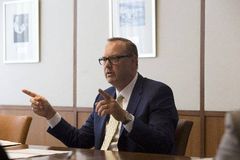