Rogers Communications Inc. has published its second yearly report on law enforcement demands for customer information, revealing a marked drop in requests primarily as a result of a policy change based on a landmark court ruling.

The Toronto-based Internet, wireless and home phone provider said Thursday that it received 113,655 requests from law enforcement and government for information about its customers in 2014.

A major reason for the decrease was that the company no longer confirms basic customer information, such as name and address, without a warrant from police. Last June, the Supreme Court of Canada unanimously ruled in the case of R. v. Spencer that police must obtain a search warrant before asking Internet providers for details that would identify their customers.

Shortly after the ruling, Rogers said it would change its practice and only provide basic customer details in response to "lawful authority," which could be a court order, warrant or equivalent production order from law enforcement or government agencies empowered to request information under legislation (for example, the Canada Revenue Agency).

Rogers was the first major Canadian telecommunications provider to issue a so-called "transparency report" last June in the wake of growing public concern over privacy and protection of personal data, and it has committed to making the publication an annual practice.

Ken Engelhart, vice-president of regulatory affairs at Rogers, said he was surprised to see that requests made under a court order or warrant did not increase last year (they actually decreased to 71,501 from 74,415 in 2013).

"I thought we would have as many this year as last year, just that the unwarranted would be replaced with the warranted. But that has not happened, there has been an absolute decline," Mr. Engelhart said in an interview. "I think the sort of conclusion you're drawn to when you look at the data is that in some cases [law enforcement officials] have just decided, 'If I have to apply for this, I won't bother.'"

He said law enforcement authorities believe the company is taking an "unnecessarily restrictive approach" to its interpretation of the Spencer decision, arguing the company could still provide basic information under the authority of federal privacy legislation without a warrant. "They wish that we would, but we're not."

Independent Internet service provider TekSavvy Solutions Inc. released a detailed report the same day as Rogers last year, and Telus Corp. followed with a report of its own in September. Regional provider Saskatchewan Telecom Holding Corp. published one in October. However, other major Canadian telecom providers, including BCE Inc. and Shaw Communications Inc., have not yet made any data on requests for their customer information public.

Christopher Parsons, a researcher at the University of Toronto's Citizen Lab, said Rogers' commitment to regularly releasing such data is commendable. Yet, he argued the company could go even further with certain aspects of its report, such as including information about when it discloses to customers that a law enforcement request has been made.

He noted that authorities are required to notify individuals who have been subject to wiretap requests or any intercept of live information. However, he said requests for stored data do not trigger a statutory requirement to inform the person that they were under investigation and unless the information is introduced in a court proceeding, they would never know.

"Rogers could advance the privacy discussion in Canada that much more by trying to push government and law enforcement agencies to let the company disclose that their customers were subject to a request," Mr. Parsons said.

Rogers also said in its report that it pushes back against requests it sees as overly broad, citing a case it is opposing in court that would have involved the information of more than 30,000 of its customers.

In that case, the police eventually withdrew the request, but Rogers and Telus are jointly pursuing a constitutional challenge over warrants they received in April, 2014, seeking cellphone information of about 40,000 to 50,000 customers in Ontario's Peel Region as part of a so-called "tower dump" request. A lawyer for the companies said Thursday that a hearing date is set for May 22 in Brampton. 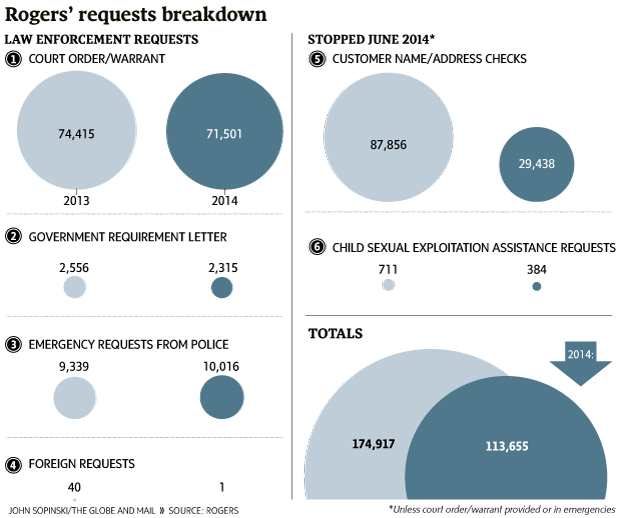 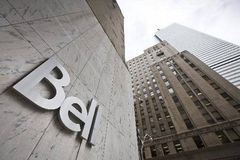 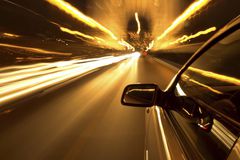