Blindsided by Bank of Nova Scotia's decision to unload its sizable stake in CI Financial Corp., Bay Street is scrambling to decipher how the sale will affect the acclaimed asset manager.

On Wednesday, Scotiabank announced it was looking to "monetize" its 37-per-cent stake in CI, worth $3.8-billion at the close that day. Scotiabank bought the position for $2.3-billion from Sun Life Financial in 2008.

Because Scotiabank has already built a sizable wealth platform around CI, few people wonder whether the move signals a change to the lender's focus on asset management.

For CI, there is no telling what will happen to its share price, and there is little clarity on who could scoop up Scotiabank's stake, leading to speculation about possible buyers. The company's shares fell 7 per cent on the TSX early Thursday, but calmer heads ultimately prevailed, and the stock closed down 3.2 per cent at $34.98. CI's poison pill, which prevents Scotiabank from selling more than 20 per cent of the company to a single buyer, is also a factor in any possible deal, and it is up for renewal at the asset manager's annual general meeting in June.

For now, Scotiabank won't say whether it is leaning toward selling its stake to strategic buyers or unloading its shares through public stock offerings. Because the lender hired Goldman Sachs Group Inc. to help it assess its options, some bankers believe Scotiabank is looking to scour the world for strategic buyers. However, Scotiabank suggested to CI it would unload the stake in smaller chunks by selling it straight to institutional and retail investors.

"There is no question that [Scotiabank] remains committed to the asset management business in Canada, but in our view, it does not need to become the largest fund manager in Canada to display that commitment," CIBC World Markets analyst Rob Sedran said in a note, explaining why there is little confusion over the bank's decision. "As for where it will go with the capital, the destination seems obvious. It's not like there are plentiful domestic alternatives for this capital and so we would expect more of it to find its way into the international footprint."

CI's future isn't so clear cut. "We are placing our long term target and recommendation 'under review' and we would be wary of buying the stock in the short term until this trade [the sale of Scotia's stake] occurs," GMP Securities analyst Stephen Boland wrote in a note to clients. "Hopefully, it does not occur in a series of transactions which would only prolong the overhang."

Mr. Boland believes CI's stock could drop significantly, approaching $30, or about 20 per cent below the closing price just before Scotiabank announced its intentions. Much of this belief is based on the expectation that the bank would have to unload at least part of its stake at a huge discount to its market price.

Not only are bigger deals usually priced at steep discounts, in order to appear more palatable to investors, there is at least one comparable recent transaction that looms large. In 2009, ING Groep NV announced it would unload at least $1.75-billion worth of stock in its Canadian insurance subsidiary, which later became Intact Financial Corp. The bought deal was priced in two chunks – a public portion done at a 22-per-cent discount, and a private placement priced at a 26-per-cent discount.

Even though the ING deal came during the financial crisis, meaning the discounts might not be totally applicable, it will linger in many investors' minds. CI has also traded around an average of 315,000 shares a day this year, meaning anyone who buys into such a massive offering might not have much liquidity for their positions. Facing this constraint, Scotiabank may have to lure them in with a big discount.

CI has also implied it could tinker with its dividend in order to buy back some of Scotiabank's stake. Even though a public stock offering is on the table, "the easier alternative is to sell to a group of strategic buyers – banks and [life insurance companies] – and CI buys back the rest at a negotiated discount," National Bank Financial analyst Shubha Khan said. However, analysts have noted there doesn't seem to be many strategic buyers available, and CI's valuation is also boosted by a lot of goodwill.

Despite the uncertainty, CI's fundamentals are widely praised, with the company posting record mutual sales in the first quarter and generating the strongest fund flows of the three large-cap Canadian asset managers – CI, AGF Management Ltd. and IGM Financial Inc.

"Fundamentally, CI remains one of the strongest operators in our coverage universe and we think the weakness created by the announcement represents an exceptionally compelling long-term opportunity," Barclays Capital analyst John Aiken wrote in a note to clients.

Why CI’s stock slumped on Scotiabank news
Subscriber content
May 15, 2014 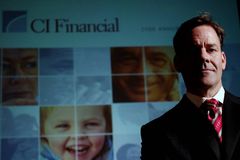 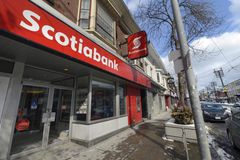 Scotiabank looks to ‘monetize’ stake in CI Financial
May 14, 2014 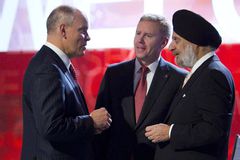