Sears Canada Inc. is moving to match rivals' lowest appliance and mattress prices – changing prices in its stores daily – in a reflection of the significant impact of Internet comparative shopping on traditional retailers.

Brandon Stranzl, executive chairman of Sears, said in an interview that the department store retailer, which released weak first-quarter results on Wednesday, started a couple of weeks ago to match appliance prices with the lowest rates in the market every morning.

The initiative will soon be applied to mattress prices as well, he said.

"You will see fairly substantial changes in how we go to market in appliances and mattresses," he said. "We want to establish price trust with consumers."

Mr. Stranzl, who took the top job at Sears almost a year ago, is racing to turn around the troubled retailer, launching changes in various departments and setting up a digital lab while slashing costs and selling off real estate and other assets.

The initiatives have yet to show up in the company's overall results. He said it will take until next spring to see a "noticeable" impact on the financials.

Same-store sales at its "core" locations (95 department stores and 39 home stores) fell 6.9 per cent and overall same-store sales were down 7.4 per cent.

The Toronto-based retailer said the sales decline was the result of an array of factors, including a drop in sales of big-ticket items such as major appliances following the termination of a credit card agreement.

The company also said it is raising its cost-cutting target in a bid to return to profitability. It's aiming to lower its annual costs by between $127-million and $155-million. The previous range had been between $100-million and $127-million, in which $80-million was achieved in the first quarter.

It said "a moderate amount of the savings" will be reinvested in growth initiatives.

By the fall, Sears will launch two pilot prototype stores with some of its new concepts, such as apparel shops geared at younger consumers and an expanded cosmetics section.

Sears' price matching in appliances and mattresses is a way for the retailer to do the price comparison work for the customers, Mr. Stranzl said.

"They don't have to do the work," added Becky Penrice, chief operating officer at Sears.

The practice of retailers matching prices is becoming increasingly common, although consumers often have to show a rival merchant's advertisement or flyer to prove a lower price elsewhere.

Mr. Stranzl said Sears will cut the price another 10 per cent if a customer finds a lower price at a rival.

She said the mattress category is different from major appliances because mattress brands and models are inconsistent among retailers. Thus in mattresses, "we focus on comparable features of major competitors to establish the market price at a national level," she said.

"While we do change prices on major appliances daily, the mattress category prices fluctuate less frequently, but we will check with the same frequency as we do with appliances," she said.

Sears' overall goal is to more than double its sales per square foot, which is roughly $200 today, he said.

Sears also announced plans to sell and lease back its logistics centre in Port Coquitlam, B.C., later this year. 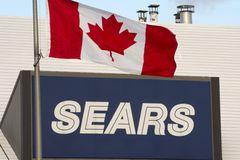