The multiyear turnaround efforts at Sears Canada Inc. are finally running out of time.

Once a shopping destination for baby boomers, Sears Canada has been in slow decline for years under shifting leaders and strategies. Now, the 65-year-old retailer faces the spectre of the beginning of the end, wondering whether it can continue and looking at a possible sale or restructuring.

Given its dire warning on Tuesday its financial situation raises "significant doubt as to the company's ability to continue as a going concern," some industry insiders say it could be in court as early as this week to file for a restructuring under insolvency laws.

Sears's warning comes at a time of mounting difficulties for traditional retailers. Their profit margins are being squeezed by the race to sell goods online, and e-commerce titan Amazon.com Inc. steals their business, forcing them to close stores and reboot.

Department stores such as Sears are feeling the shifting tides acutely, pushing them to downsize their operations, cut staff and come up with new business models to take on more nimble rivals.

Mall landlords could feel the brunt of Sears's cash squeeze as they scramble to fill stores left empty by U.S. retailer Target Corp., which failed in Canada in early 2015 and shuttered all of its 133 outlets here (plus seven more stores that it never occupied). Few retailers in Canada are looking to expand aggressively when they are more focused on beefing up their e-commerce sales. And big foreign retailers aren't rushing to enter Canada and fill the void of shrinking incumbents.

"Many landlords, including ourselves, have contingency plans and in some cases contingency deals where the deals are done for all or some of the Sears space" if the retailer were sold or collapsed in bankruptcy proceedings, said Alan Marcovitz, president of mall landlord Westcliff Group, which has seven Sears leases.

Some Sears leases are complicated by restrictions on tenant uses, such as only allowing another department store to fill the space.

"It's going to be quite a show if this ends up in a bankruptcy," Mr. Marcovitz said.

Even so, a number of retailers stand to profit from Sears's woes. One of them is archrival Hudson's Bay Co., which announced last week it is letting go 2,000 employees in North America and revamping to generate $350-million in annual savings.

"When a competitor is out, more customers are looking for a substitute," said Hugh Latif of Hugh Latif & Associates Management Consultants.

Other potential beneficiaries of Sears's problems could be discount giant Wal-Mart Canada Corp., Quebec fashion specialist La Maison Simons and Canadian Tire Corp., all of which may look at buying some of the Sears leases, in some cases to nab a better location, Mr. Latif said. Simons is one of the few retailers in this country that is rapidly expanding.

"Probably landlords will sweeten the pie for them," he said.

And retailers such as Canadian Tire and Wal-Mart have been interested in potentially picking up some parts of Sears, most notably its rights to prominent brand names such as Kenmore appliances, industry sources said.

Sears's acknowledgement of its cash crunch and its hiring of law firm Osler, Hoskin & Harcourt LLP are essentially clues the retailer is preparing a court filing for a restructuring, said Lou Brzezinski, an insolvency lawyer at law firm Blaney McMurtry LLP.

The fact that Sears has retained Osler, whose lawyers represented Target Canada in its insolvency proceedings, is no coincidence, Mr. Brzezinski said. The only really valuable asset left at Sears is its trademarks, he said.

Sears Canada said it is looking at its strategic alternatives as its struggles to meet its financial obligations, considering a range of options from a sale to a revamping. It has hired BMO Nesbitt Burns Inc. as its financial adviser and Osler for legal advice.

"The company continues to face a very challenging environment with recurring operating losses and negative cash flows from operating activities in the last five fiscal years, with net losses beginning in 2014," it said in releasing generally disappointing first-quarter results.

Sears Canada shares tumbled more than 24 per cent to 87 cents on the Toronto Stock Exchange.

While Sears has showed signs of progress in its transformation efforts, including adding discount designer lines to its offerings, it is running out of sources of liquidity to implement its business plan.

"Based on management's current assessment, cash and forecasted cash flows from operations are not expected to be sufficient to meet obligations coming due over the next 12 months," it said.

Sears had expected to be able to borrow up to an additional $175-million secured against its owned and leased real estate as part of the second tranche of its existing term loan with private-equity firm KKR. But based on its latest lender negotiations, Sears expects to borrow only up to $109-million.

Sears said it has struck a special committee of its board of directors to help in the process of seeking alternatives. It is postponing its annual meeting, which was scheduled for Wednesday. One of its directors, Jeffrey Stollenwerck, who wasn't standing for re-election, resigned on Tuesday.

Sears's financial troubles come as it begins to make progress in its reinvention initiatives under executive chairman Brandon Stranzl, who arrived at the helm almost two years ago. Sears's same-store sales at outlets open a year or more, an important retail measure, rose 2.9 per cent in its first quarter. But it wasn't enough: Its first-quarter loss more than doubled to $144.4-million, or $1.42 a share, from $63.6-million, or 62 cents, a year earlier. Sales tumbled 15.2 per cent to $505.5-million.

Its overall sales drop was a result of a decline in the number of catalogues it issued; products being unavailable on its new website amid technology snags; and fewer merchandise pickup locations to cut costs.

In March, Sears's U.S. parent, Sears Holdings Corp., once the largest retailer south of the border, warned there was "substantial doubt" it would be able to continue as a going concern after years of losses and dipping sales. Toronto-based Sears Canada operates separately from its U.S. parent but is still controlled by hedge-fund manager Edward Lampert, who is chairman and chief executive officer of the U.S. chain.

Sears Canada ended its first quarter on April 29 with cash of $164.4-million, compared with $235.8-million at the end of its fourth quarter.

Its current cash position includes $125-million (before transaction fees) from the first tranche of its up to $300-million term loan and $57-million of net proceeds from real estate transactions closed during its first quarter.

On June 5, Sears Canada drew $33-million under its existing revolving credit facility, which was effectively the maximum amount available on that date.

In its transformation efforts, Sears Canada has so far relaunched four stores under its more minimal redesign, with 10 more planned this summer. It has also installed new technology for its "Initium" digital strategy, although it has faced some setbacks in the rollout. And along with introducing off-price discounted designer lines in apparel and home goods – borrowing a page from retailer Winners's playbook, it also has overhauled its private-label lines under the new Sears Label to offer more affordable, higher-margin fashions and home décor items.

The rise and decline of Sears Canada

1952 — Simpsons-Sears is founded as a national mail-order business, as part of a partnership between the Robert Simpson Company of Toronto and Sears Roebuck Co. of Chicago.

1973 — The company opens its first store under the "Sears" banner.

1984 — The company formally changes its name to Sears Canada.

1998 — The company launches its e-commerce website, becoming one of the first retailers to do so in Canada.

1999 — Sears buys the bankrupt chain, The T. Eaton Company Ltd., including all of the flagship department stores in coveted locations like the Toronto Eaton Centre.

June 2011 — Calvin McDonald named president and CEO of Sears Canada and embarks on a three-year turnaround plan as sales decline and thousands of jobs are cut.

2012 — Sears begins selling off leases to its stores in prime locations.

Sept. 2013 — McDonald abruptly steps down as president and CEO in the midst of the plan.

May 2014 — U.S. parent company Sears Holdings Corp. hints that it's looking to sell the ailing retailer.

July 2015 — Brandon Stranzl is named executive chairman of Sears Canada. Stranzl has ties to the U.S. hedge fund run by Edward Lampert, which then controlled about 45 per cent of the Canadian company's shares.

July 2016 — Sears Canada president Carrie Kirkman leaves less than a year after being in the position.

Aug. 2016 — Sears Canada rebrands logo for the first time in 32 years by adding a maple leaf.

Apr. 2017 — Sears Canada announces plans to give some space to a partner grocer at three to five of its locations for groceries .

June 2017 — The company announces it is exploring strategic alternatives including selling itself, as it continues to face a worsening cash crunch. 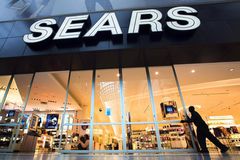