After 10 years of working to carve out a niche in China's promising insurance market, Donald Stewart can point to his biggest challenges from the 18th-floor window of Beijing's Ritz-Carlton hotel.

"You see those buildings, with the green half-circle? The China Life logo is on four buildings there. It's the largest insurance company in the world. There is competition here," says the chief executive officer of Sun Life Financial Inc. , gesturing to the China Life buildings visible on the horizon.

"But it's a very big market and if we are able to get a reasonable slice of it, we'll do very well."

Canada's biggest insurance firms, Sun Life and Manulife Financial Corp., have been operating in China for at least a decade in joint ventures with local partners. But now, an industry mired in lacklustre results at home is looking to China for the kind of profits found nowhere else.

As part of their efforts to grow here, a who's who of the Canadian finance industry is touring China this week with Finance Minister Jim Flaherty.

That group includes the CEOs of the two Toronto-based insurance giants.

In many ways, China is a dream insurance market - a country where the industry is still in its infancy and where the middle class is increasing by leaps and bounds.

With an economy growing at 8 per cent annually, business operations in China can realistically be doubled or even tripled in as little as five years.But breaking into China's insurance scene isn't easy: 40 per cent of the market is dominated by China Life Insurance Co., and foreign ventures are deemed to be doing well if they can nab even 1 per cent of market share.

"The top three [companies]account for about 63 per cent of the market already, so the market has been very concentrated on the top players," said Sally Yim, assistant vice-president and analyst with the financial institutions group of Moody's Asia Pacific Ltd., based in Hong Kong.

Although more than 50 insurance companies now operate in China, including joint ventures, Ms. Yim said many are struggling.

"They haven't been very profitable because these joint ventures are really new, and there are really large startup costs. China is such a big country, to set up takes such time and money," she said.

Still, the promise of this market brings a gleam to the eye of Manulife president and CEO Donald Guloien, who speaks enthusiastically of the opportunities for insurance, pension plans and asset management in a country with an aging population and a strong culture of saving.

Manulife operates in China as Manulife-Sinochem, with offices in 35 cities and one about to open in the 36th. It also has ambitious expansion plans - a presence in 75 to 100 cities, with as many satellite offices, within five years.

"Through those [35]cities, we can touch 255 million people - which is pretty staggering, from a Canadian point of view," Mr. Guloien said. "It presents us with a long-term growth opportunity."

But both Canadian companies face challenges on the ground. Each expansion requires licensing, which, in Chinese business culture, often requires face-to-face meetings and good relationships with regulators.

Once permission to expand is granted, the organizations then face the task of promoting products the market is only just beginning to hear about, amid stiff competition from Chinese companies.

Adding to the market's possibilities - and uncertainty - are amendments to China's Insurance Law, which take effect in October. Meant to increase consumer protection, they also expand the ways in which insurers are allowed to invest, including more trading of securities and use of bank deposits.

Industry analysts say the new rules will increase risks as inexperienced insurers deal with new types of investments, but will also expand the potential for profit. And the changes may give foreign ventures a rare advantage over domestic companies, because they will bring in experience from overseas.

It was with an eye to those local conditions that Sun Life's Mr. Stewart presided over the recent restructuring of Sun Life's operations with China Everbright. Strategic investors will now be introduced to Sun Life Everbright in order to more than double its registered capital, taking it to about $500-million. Sun Life will have a 20-per-cent stake in the restructured company, down from 50 per cent.

"Our view is that a more local presence, with additional investors and additional capital, will lead to a more successful organization," Mr. Stewart said. "We will essentially have a smaller slice of what we hope and believe will be a larger pie."

As the Canadian mission led by Mr. Flaherty winds its way from Beijing to Shanghai, the level of optimism is high.

"I see a brilliant future for Canadian financial institutions in China," Mr. Flaherty said Wednesday. "I am hopeful they will be permitted to expand their businesses [in China]in significant ways over time. … The savings rate in China is substantial, and there's lots of room for new financial products and services." 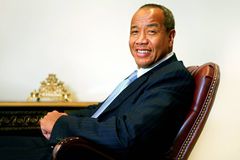