Shaw Communications Inc. is offering buyouts to almost half of its work force in the midst of what it is calling a "total business transformation" aimed at reducing operating costs as more subscribers go online for customer support.

The Calgary-based company confirmed Tuesday that it has offered voluntary severance packages to 6,500 non-unionized employees of both Shaw and Freedom Mobile and expects about 10 per cent of those workers to accept the offer. The company has 14,000 employees, according to its 2017 annual report.

Shaw said the cuts are part of a multiyear initiative to "reinvent its operating model" as it reviews operations and internal processes across all parts of the cable and wireless company. The focus of the changes is on offering more cost-efficient customer service; for example, by offering online or app-based support instead of assistance over the phone or by pushing self-install options rather than sending technicians to set up internet or television service.

Shaw purchased startup wireless carrier Wind Mobile (now renamed Freedom Mobile) two years ago for $1.6-billion and has fuelled heavy investments in that growth business by selling its media assets as well as a U.S. data centre business. The company's balance sheet is strong and its debt leverage is low – "Our financial position has never been stronger," president Jay Mehr said earlier this month – but it is clear Shaw executives are increasing their focus on profitability as they look to rein in expenses on a long-term basis.

"We see that we have to make some significant changes to serve customers the way they expect to be served in 2018 and beyond," Mr. Mehr said in a statement on Tuesday. "Our agents in contact centres and our technicians will still be able to deal with more complex questions and situations, but we are committed to listening better to our customers and changing our operating model to better suit their preferences for service when they want and how they want it."

Shaw said it is giving affected employees until Feb. 14 to consider their options; it characterized the "voluntary departure program packages" as "generous," but said it would not provide further details on severance.

"We cannot speak to hypotheticals about the program," Shaw spokesman Chethan Lakshman said in an e-mail when asked about what the company would do if it does not get enough volunteers accepting the offer. He declined to comment on how much the job cuts would save the company on a continuing basis or how much Shaw would incur in restructuring costs as part of the changes.

Shaw last made major job cuts in 2014 when it eliminated 400 positions after streamlining its operations; changes included separate operations for residential and business customers as well as a centralized technology and network team. The following year, it consolidated its call centre operations into fewer Canadian cities, offering 1,600 employees the option to move.

This month, the union representing Freedom Mobile employees at a Windsor, Ont., call centre said 130 jobs are expected to be lost as the operations move to Victoria. Mr. Lakshman said on Tuesday the closing of the Windsor call centre was part of the consolidation the company started in 2015. "We will be consolidating our Canadian customer care operations into a single location in Victoria, B.C. This announcement was the latest step in Freedom Mobile's continued integration into Shaw's larger operations," he said.

Shaw reported its first-quarter financial results on Jan. 11, revealing healthy growth at its nascent wireless division but a decline in revenue at its core residential cable and internet business. Analysts noted that, while recent moves Shaw had made on its wireless business are promising, profitability at its cable division remains crucial to the company.

The company launched an internet-based television platform, BlueSky TV, about a year ago and kicked it off with heavy promotions designed to win customers. But over the course of the year, it pulled back on those discounts and in the three months ended Nov. 30, Shaw lost about 19,000 cable customers.

"While the company's wireless business continues to improve, without material improvement in wireline [cable], it will be hard to generate consolidated growth," Desjardins Securities analyst Maher Yaghi wrote at the time, noting the drop in profit at the cable business. 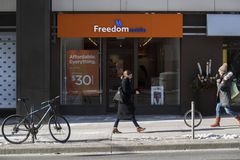