It doesn't take a fortune teller to predict that most e-commerce will soon be done on smartphones.

Traffic-wise, more users accessed the Internet via mobile devices in October than on desktops or laptops – the first time that has ever happened worldwide, according to data from tracking firm StatCounter. Canadians are actually ahead of the curve, having surpassed that threshold last year.

Similarly, phones are soon expected to account for the majority of e-commerce visits – up to 60 per cent in the United States this year, according to software provider Demandware. That portion is set to grow over the next few years, a trend that's happening universally.

With such unmistakable momentum, experts say small and medium-sized companies engaging in e-commerce of any sort need to squarely focus on the mobile side of their businesses, if they aren't already doing so.

"If you want to sell on the Internet period, then you have to be thinking mobile first," says Brandon Chu, senior product manager at Ottawa-based e-commerce tool provider Shopify.

Fortunately, getting into mobile e-commerce or improving existing offerings doesn't have to be difficult, the experts say, provided businesses keep a few key points in mind.

"Keep it really simple and focused," says Sunta Sem, a merchant in residence for Saskatoon-based eco-friendly phone cover maker Pela Case. "You have to make sure you're not throwing too much at the customer at once."

With attention spans especially short on phones and data usage caps often making users wary of busy pages, businesses should keep their sites bare-bones by providing only their most pertinent information. Physical address, contact information, opening hours, a few images, product information and a digital storefront are all that's needed.

The no-frills approach is also best applied to desktop website design, to avoid having to create multiple portals. A single "responsive" website, or one that properly conforms to the dimensions of different screen sizes, is a must.

Avoiding clutter also means that sites load faster, which is key to keeping potential mobile customers – many of whom browse while doing something else, like watching TV or riding the bus home from work – from quickly moving on.

"A slow experience means a bad customer experience," says Eric Morris, head of mobile advertising at Google Canada. "Fractions of a second can have a double-digit impact in terms of customer satisfaction and conversion rates, or the percentage of people who do the action that you want them to do."

Once their sites are pared down, businesses can test them by using a myriad of free online tools that measure loading speeds and mobile compatibility, he adds. Google's Test My Site, for one, offers tips on how to improve website functionality.

Many small business owners wonder whether they need to create a smartphone app to get noticed on mobile, but most experts point to the stats as proof that it's unnecessary.

Mobile users spend about 85 per cent of their time in the 10 most popular apps, with Facebook alone accounting for about a third of that, according to Shopify. Most users download few to no new apps each month, which means it's hard for small businesses to get a return on their development costs.

Apps can still be valuable, but they typically pay off only for businesses that have established brands and audiences. They can be used to deliver rewards to a company's most loyal customers or to generate repeat business.

"If you don't already have a customer base, a mobile app is not going to be the thing that gets it," Mr. Chu says.

It's more important, he adds, to practise proper search engine optimization (SEO), where a company embeds every possible keyword that relates to its business within its site. SEO is free and can drive more sales than an app.

It can also be more worthwhile for small businesses to put their time and resources into promotion on social media platforms.

Shopify users can, for example, easily add a "sell" button to their Facebook or Instagram pages, which can generate sales without redirecting customers to their own websites.

For some businesses, advertising on these platforms rather than on the larger Web can also lead to better results. SEO can deliver customers to a company's website, but targeted advertising on social media can grow a brand.

"If people are searching for your business, they already know what they want," says Ethan Song, co-founder of Montreal-based clothing retailer Frank + Oak. "But lots of people spend hours on Facebook so you have a chance to create demand if you're a little bit clever."

4) Mobile is the hook

A good portion of e-commerce is still happening on desktop and laptop computers, at least for the time being, but mobile is still an important way to lure customers even if they aren't making purchases on their phones.

Pela Case, for example, sees about 75 per cent of its online traffic arrive via mobile, but the majority of sales still happen on computers. To address that imbalance, the company offers visitors to its mobile site a coupon if they sign up to a mailing list. Follow-up e-mails can then be used to drive sales on its desktop site.

"People aren't necessarily going to your mobile experience with a purchasing intent," Ms. Sem says. "But you want to keep the relationship warm until you can catch the customer at the right time."

Inkbox, a Toronto-based retailer of temporary tattoos, sees similar trends. About three-quarters of its traffic is mobile, but purchases are 60 per cent lower than on desktops. Part of the reason is that it's still difficult for people to shop on their phones – they have to fill in forms and credit card numbers, which is a hassle.

"It's still not as nice as purchasing via a desktop," says co-founder Tyler Handley. "You're probably not getting as many impulse buys."

Inkbox tries to obviate that by advertising on Facebook and Instagram to build awareness of its product, then following users onto their desktops with additional targeted ads. "That's when they're more inclined to purchase."

Shopify, which provides e-commerce tools for more than 300,000 businesses, expects the mobile shift to ramp up dramatically in 2017 thanks to the launch of Apple Pay on websites this past September.

Apple's iPhone-centric, one-touch mobile transaction feature is competing with other convenient payment methods in physical stores, such as tap-and-pay credit cards, but it doesn't have that obstacle online.

Apple Pay, as well as competitors Android Pay and Samsung Pay, could therefore see more success online because it eliminates the need for users to fill out those annoying forms.

"The proposition for in-person has more to do with security and less so about reducing friction. It's the opposite online," Mr. Chu says. "We really recommend to all our merchants to add Apple Pay." 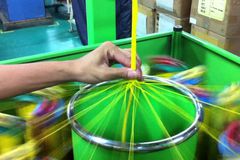 How to keep valuable employees from bailing
April 8, 2017
Hooked on basketball, Mano Watsa’s love for the game propels his business
April 7, 2017
Follow Peter Nowak on Twitter @peternowak
Report an error Editorial code of conduct
Due to technical reasons, we have temporarily removed commenting from our articles. We hope to have this fixed soon. Thank you for your patience. If you are looking to give feedback on our new site, please send it along to feedback@globeandmail.com. If you want to write a letter to the editor, please forward to letters@globeandmail.com.
Comments