Riding the high of a strong quarter that saw Shopify Inc. beat analyst expectations for the 10th period in a row, chief executive officer Tobias Lutke doubled down in his rebuke of a short-selling U.S. "troll" and his "preposterous claims" that the company is a get-rich-quick scheme.

"This is going to be fun," Mr. Lutke said to open Shopify's quarterly analyst conference call on Tuesday, in which he and fellow executives framed much of their financial discussions around the legitimacy of their business model. He offered three specific points to rebut Andrew Left of Citron Research, who on Oct. 4 alleged that the company sells "business opportunities," drawing a connection to Herbalife, a multilevel-marketing firm that paid a $200-million (U.S.) settlement to the U.S. Federal Trade Commission to avoid being officially classified as a pyramid scheme.

"We don't sell business opportunities – we sell a commerce platform," Mr. Lutke began, adding to that point that Shopify fully complies with FTC rules and does not promise its merchants success.

"Every 90 seconds, an entrepreneur makes their first sale on our platform," he continued, insisting that Shopify is a boon for small businesses in a world where enormous companies define more and more of the business landscape. "We celebrate and cherish this accomplishment, because it's not easy. This is what we are most proud of. Implying that these businesses are somehow illegitimate is an insult to their hard work."

Some analysts attributed Tuesday's downward share movements to the lack of detail in Shopify's response to Mr. Left. "While the company was incredibly thoughtful with its defence of the business, the market was hoping for more," Tom Forte, who covers the company for D.A. Davidson Research, said in a phone interview. He said he was hoping for more detail on total merchant numbers and how Shopify deals with unapproved entities promoting their business.

Richard Davis of Canaccord Genuity said in a note that "for those who value companies based on fundamental execution, Shopify is fine. The problem … is that [Shopify] is still highly valued, the shorts have rattled investors' confidence and no hard data will come from the company until Shopify prints and guides for 2018 in just over three months."

Mr. Left did not respond to requests for comment, but Citron issued a news release mid-day on Tuesday that said the research group was "unimpressed" with Shopify executives' response to his concerns, and planned to forward materials to the FTC that it believes will prompt an investigation.

"It is impossible to understand the real strength of Shopify's core business without getting specifics of their true customer acquisition cost," the Citron release says. "To accomplish that, churn needs to be analyzed, so investors can discount or strip out the dirty/illegal part of their business that will inevitably be curbed by regulators. Immaturity and hubris of management prevents them from addressing these issues."

Revenue jumped 72 per cent at Shopify, beating analyst estimates for the 10th consecutive quarter, as the company revealed an adjusted operating profit for the first time since going public – a milestone the company considers crucial – a quarter earlier than expected.

The Canadian tech darling reported revenue of $171.5-million for its third quarter, above the analyst consensus forecast of $166-million. Bolstering this was growth in monthly recurring revenue, as a record number of merchants signed on with Shopify, the company said, boosting its subscription revenue 65 per cent to $82.4-million.

It revealed an overall loss of $9.4-million or 9 cents a share, compared with $9.1-million or 11 cents a year earlier. But Shopify also said its operating income, adjusted to exclude the effect of share-based compensation expenses and related payroll taxes, was $1.7-million – an in-the-black touchstone the company did not expect to hit until the fourth quarter. Investors tend to hone in on Shopify's adjusted numbers to assess its health.

Given the "solid profitability upside," Raymond James Equity Research analyst Brian Peterson said in a research note that "more top-line upside may flow through to the bottom line going forward."

Shopify also upgraded its forecasts for the fourth quarter and fiscal year, expecting full-year 2017 revenue between $656-million and $658-million, and an adjusted operating loss between $1.5-million and $3.5-million. Citi Research analyst Kenneth Wong suggested in a research note that this "soft" guidance, juxtaposed with the third-quarter strength, was pressuring shares on Tuesday.

One of Mr. Left's criticisms of Shopify was its network of more than 13,000 affiliates, or partners that refer merchants to the service, calling the recruitment practice "dodgy." It's one of Shopify's biggest channels for customer acquisition, giving affiliates the chance to earn the equivalent of two months of a customer's fee, which starts at $29 monthly, when they first start using the platform.

Affiliate marketing is a common tactic, used by companies including Amazon.com Inc. and eBay Inc. Mr. Left focused his criticism on third parties promoting the use of the platform as an opportunity to become a millionaire – messaging Shopify distanced itself from on Tuesday – which could attract trouble from the FTC.

Harley Finkelstein, Shopify's chief operating officer, clarified the role of its affiliates on the conference call. They are not paid to recruit other affiliates, he said – they're largely bloggers, publishers and business coaches that refer new merchants to the service.

"Our team individually approves every affiliate partner who applies after looking at their website, their profile and whether they're a fit for [the] brand," Mr. Finkelstein continued. "Once approved … they agree to the partner terms, which includes their disclosure responsibilities. In terms of compensation, our affiliate partners typically earn an upfront commission for each referred merchant."

Mr. Lutke said Shopify had not had any conversations with the FTC since Mr. Left levelled his accusations. "If it would be anything material, this would have been part of our disclosure," he said. 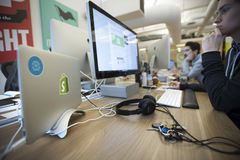 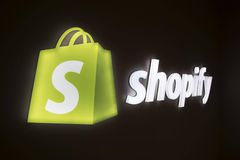