Bombardier Inc.'s proposed C Series jet, already two years late, is stirring concern among analysts that the company will miss its target to get the plane in service by the second half of 2015.

The initial delivery of the plane maker's biggest-ever model will probably be postponed for a third time, pushing the commercial debut to 2016, according to nine analysts, investors and consultants tracking the program.

Another delay would heighten the threat of a liquidity crunch, according to bond researcher Gimme Credit, because Montreal-based Bombardier has $750-million in U.S. dollar-denominated debt due in January 2016. Shipping aircraft on schedule is crucial because buyers usually pay most of the purchase price upon delivery.

"There's a risk that the ramp-up may be slower in coming than the company was anticipating, which would affect cash flow," said Evan Mann, a Gimme Credit analyst who has an underperform rating on Bombardier's bonds. "If that happens, it seems more likely to me they may need to raise more money."

Bombardier reaffirmed its 2015 target earlier this month when flight trials resumed for the C Series after an engine fire in May. The plane – which first flew a year ago today – is now about 15 per cent of the way through a 2,400-hour test program and about $1-billion over budget.

"They're being borderline delusional if they think they're going to meet the 2015 target," Richard Aboulafia, an aerospace consultant with Fairfax, Virginia-based Teal Group, said in a telephone interview. "That's not going to happen. If it's the first half of 2016, I will call that a strategic victory."

Aboulafia has more than 20 years of experience in the aerospace industry and writes reports providing forecasts of aircraft markets.

Bombardier grounded all four C Series prototypes when a Pratt & Whitney engine failed during testing. The extended idleness went beyond Bombardier's initial prediction that flights would begin again "in the coming weeks."

On Sept. 7, Bombardier resumed flight testing for the program and reaffirmed its forecast for entry into service. Another prototype had its maiden flight yesterday, the company said on its website.

"The C Series flight testing activities are successfully moving ahead, making great progress,"Rob Dewar, vice president of the C Series program, said in a statement. "We are seeing great results."

Bombardier stands by its forecast for a 2015 commercial debut, said Marc Duchesne, a spokesman, in an interview Sept. 12.

"The fundamental architecture of the geared turbofan engine remains rock solid," said Graham Webb, vice president and chief engineer at Pratt & Whitney, speaking with Dewar in a video posted to the company's website on Sept. 5.

"Everybody is in show-me mode with Bombardier," said Don Reed, who oversees C$1.2-billion ($1.1-billion) for Franklin Templeton Investments in Toronto and holds Bombardier stock. "They just haven't been able to make it work."

Bombardier's Class B stock has declined about 20 per cent this year, the third-worst performance among Canadian industrial stocks. Of the 25 analysts who cover the stock for financial firms, 11 rate it hold, four say sell and 10 buy. The shares fell 0.3 per cent to C$3.68 at 2:28 p.m. in Toronto today.

Five-year credit-default swap contracts on Bombardier debt widened by about 4 basis points to about 329 basis points, the biggest increase among members of Canada's benchmark Standard & Poor's/TSX Composite Index, according to data compiled by Bloomberg.

Capital expenditures in aerospace will probably range from $1.6-billion to $1.9-billion this year, then fall to less than $1-billion in 2016, Chief Financial Officer Pierre Alary said in a July 31 conference call.

Bombardier had available liquidity of $3.9-billion as of June 30, according to a second-quarter filing. That's down from $4.8-billion at the end of 2013.

"We have the liquidity that we need to develop our products," Chief Executive Officer Pierre Beaudoin told analysts on the quarterly earnings call. The company stands by Beaudoin's comments, Isabelle Rondeau, a spokeswoman, said yesterday.

In July, Bombardier announced a plan to cut 1,800 aerospace jobs – which could save as much as $180-million a year, according to David Tyerman, a Canaccord Genuity analyst in Toronto.

The company's debt is rated BB– by Standard & Poor's and an equivalent Ba3 by Moody's Investors Service, three levels below investment-grade. Bombardier's long-term debt amounted to $7.78-billion as of June 30, according to a July 31 filing.

Bombardier is 97 firm orders shy of its 300-unit sales target for when the CS100 – the smallest of two C Series versions – plane flies commercially. Bombardier has said it's counting on the plane to generate as much as $8-billion in annual revenue later this decade.

Only one of the plane's 12 named firm buyers, Deutsche Lufthansa AG, ranks among the world's top 20 by passenger traffic.

"I'd have more comfort if there were A-List airlines who were ordering these planes," Mann said. "There's Lufthansa, but it's not enough."

While Bombardier also has conditional orders, letters of intent and options for an additional 310 units of the C Series, "if people walk away, these options are worthless," Mann said.

Carriers in Russia, Ukraine and Iraq are scheduled to take delivery of 12 C Series jets in 2016 – or 18 per cent of that year's total – and 13 of the 65 deliveries expected the following year, according to Ascend Worldwide data compiled by Bloomberg Intelligence.

Russia is currently subject to international sanctions over the conflict in Ukraine, and Bombardier would likely suffer if the tensions were to escalate, said Canaccord Genuity's Tyerman.

Bombardier has already said it will probably have to delay a plan to build a turboprop factory in Russia – the company's key commitment in securing an estimated $3.4-billion letter of intent to sell Q400 turboprops to Russia's state-owned Rostekhnologii. Bombardier said last year it expected to finalize the deal in 2014.

Not everyone is banking on a C Series delay.

"It's too early to assume it's going to slip into 2016," said Peter Arment of Sterne, Agee & Leach Inc. "They lost some of the margin they had in their schedule, and now it's critical for them to get the planes back up in the air and ramp up the hours. Right now there is some skepticism about the second half of 2015 entry."

Strauss and Genovesi predict Bombardier will ship 10 units of the C Series in 2016 and 24 the following year, according to a UBS note published today.

The C Series "will add no value to Bombardier," Quettawala said in a note published Sept. 8. "We see no reason to get excited until the C Series is de-risked and advise investors to take money off the table on any strength which may come as flying re-starts."

"If it was just rails the stock would probably be trading higher," Reed said. "The C Series has probably taken away from the value. Bombardier has to get people happy about that plane." 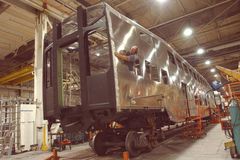 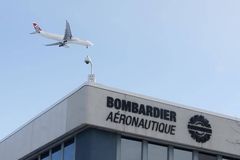