The head of Quebec-based department store chain Simons says he feels vindicated as the retailer completes the first phase of a five-year, $200-million national expansion even as the empires built by its contemporaries seem to crumble around it.

While chains such as Sears struggle to survive a changing retail landscape, the 177-year-old company is gaining fans among millennials and older shoppers seeking something different both online and at its increasing number of bricks and mortar stores.

"I'm feeling really good about where we're at," chief executive Peter Simons said in an interview from his eponymous store's second location in Edmonton. The store, opening on Thursday, is its 15th outlet and the first equipped with solar panels on the roof and in the parking lot.

For subscribers: Quebec's comeback: Why the province is riding an economic boom

The chain's roots in Quebec and focus on exclusive merchandise, unique assortment, artwork and strong design have translated well in English Canada, Mr. Simons said. The mid-priced chain's narrow focus means it hasn't felt the pressure to diversify into cosmetics, appliances or furniture the way some of its competitors have.

Some observers wondered whether the company would have the financial means to accomplish its expansion without going public, but Mr. Simons said being privately held has given it the freedom to take risks because the company doesn't have to answer to shareholders on a quarterly basis.

"We're in a period that requires long-term thinking and long-term adjustments that are at times painful in the short-term, but necessary," he added. "That's very hard to do in the public sphere."

Mr. Simons pointed specifically to the $1.5-million solar field that he believes would have been a hard sell for approval at a public company focused on investment returns.

The energy-saving project will be added to its Quebec City La Capitale location before potentially being adopted elsewhere. The panels are a visual reminder of the chain's commitment to cut its energy footprint, he said.

Simons is reaping the rewards because it "doesn't have to worship at the alter of short-term earnings," Trendex retail analyst Randy Harris said. "They are becoming a national powerhouse."

Mr. Harris estimates that Simons is Canada's 15th largest apparel e-commerce retailer and 12th largest retailer in the country. He believes the Simons chain can eventually expand to 22 or 23 stores.

Mr. Simons said the next phase will likely add three or four locations at some point.

Mr. Simons, the great-great-grandson of the company founder, said the freedom from shareholder pressure has translated into success at stores as well as an expanding e-commerce business. He said online sales within Canada and the United States account for more than 15 per cent of sales, far more than the average reach by Canadian retailers.

However, the CEO is taking a breather from an aggressive growth strategy that has seen the company add more than 1,500 employees in the past five years to reach 3,500. Instead, he will focus on keeping stores up to date and working to build a $150-million high-speed robotics warehouse – likely in Quebec City – to improve the efficiency of its online and retail business.

While many question the future of shopping malls amid the rise of e-commerce, Mr. Simons said the chain's expansion has demonstrated that retailers need their physical and web presences to work symbiotically.

"The opening of a new physical store in a market really does help not only the bricks and mortar, but also the overall e-commerce system."

Despite the travails of some of its peers, Simons has shown that the department store concept isn't dead, retail consultant John Williams of the J.C. Williams Group said.

"It's a department store that strategically has a cutting edge that makes it appealing to the contemporary consumer." 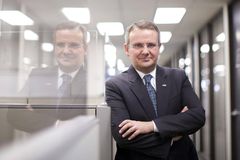