The two men grinned and shook hands for the cameras in the lobby of the Trump Tower, and Mr. Trump proclaimed it a "great meeting."

This September, Mr. Ma will be in Toronto airing a similar proposal to Canadian businesses – albeit without the specific job-creation numbers and the attention of the White House press corps.

Called "Gateway 17," the event is advertised as a business summit – featuring Mr. Ma and Prime Minister Justin Trudeau as speakers – to introduce Canadian businesses to Alibaba and Chinese e-commerce. "We have about 500 million consumers on our platform in China, and they're very interested in buying great Canadian products," said Alibaba's president Michael Evans, who is Canadian.

With a booming Chinese middle class demanding ever more consumer goods, e-commerce opportunities for Canadian exporters are significant and growing. Any promise of export-oriented jobs, however, has to be measured against an environment of fierce competition in China, problems with counterfeiting and regulatory and logistical challenges, especially for small businesses with little experience selling into the world's largest consumer market.

The upcoming event in Toronto follows a similar one held in Detroit in June, and is part of a broader public-relations effort, said Christopher Balding, an associate professor of international economics at Peking University HSBC School of Business.

"More than anything, it appears designed to raise brand awareness," Prof. Balding said. The events are also a way for Alibaba to shift focus away from counterfeiting, a widely alleged problem for the company's Taobao platform, which focuses on small businesses and independent manufacturers. Taobao has been on the United States' "notorious markets" list since 2016, supposedly because of piracy issues, although Mr. Evans said the designation is "part of a broader geopolitical consideration" between the United States and China.

"They've very successfully shifted the conversation, so at least there are two things to talk about now, rather than one, being the counterfeiting issue," Prof. Balding said.

The Gateway 17 events can also be seen as an effort to shore up political support in North America, as the company looks to secure financing and make North American acquisitions, said Duncan Clark, chairman of advertising firm BDA China Limited and author of Alibaba: The House That Jack Ma Built.

"Alibaba isn't trying to push Amazon or Walmart aside in North America," he wrote in an e-mail to The Globe and Mail. "They are more focused on securing capital from Wall Street … technology and innovation from Silicon Valley (they've made multiple investments in a range of companies from Lyft to Snapchat to e-commerce related companies and beyond) and brands."

Alibaba wants to list North American brands to help compete with e-commerce companies at home, Mr. Clark said. And with U.S. protectionism on the rise, it needs political support to reduce the risk of opposition to its North American acquisitions – hence the moves by Mr. Ma to ingratiate himself with Mr. Trump and Mr. Trudeau. "Jack understands the benefits to Canadian politicians …of showcasing exports into China from maple syrup to lobster to apples or luxury goods."

Prof. Balding, however, warns that job-creation rhetoric is overstated and small companies will have a hard time entering the Chinese market, even with e-commerce platforms making sales and marketing easier.

"If you're a company the size of Costco and you get 10,000 different orders for socks to nuts and everything in between, you can essentially just rent out a couple of shipping containers, ship to Shenzhen or Shanghai, and then you can have the products distributed from there via the standard Chinese logistics routes," Prof. Balding said. "However, if you're a mom-and-pop operation in Canada, even a small business in Canada or the United States, you don't have that type of shipping bulk and have to find a way to work with that."

Jack Liu, president of ZF Max International Inc., a Canadian subsidiary of an international seafood company based in China, echoes this skepticism. "If you've never done business with China, and you have no offices or partners there, Alibaba alone is not enough," he said.

His company's success selling more than 90,000 Nova Scotia lobsters on Alibaba in a single day in 2014 is frequently cited by Mr. Evans as an example of demand for Canadian products. Mr. Liu readily acknowledges that Alibaba provides another avenue for sales and marketing. However, the record sales were only possible because his company has a well-established presence in China, he said.

"It's not like you open a flagship store on Alibaba and start making sales," he said. "You still need to pay duties and value-added tax, clear Chinese customs. If it's food, you need to deal with the Chinese equivalent of [the Canadian Food Inspection Agency]. And after clearing customs, how are the logistics going to work?"

Michael Blicher, a China export specialist for Ontario-based Ryding-Regency Meat Packers Ltd., agrees. For the past 18 months, his company has been doing direct-to-consumer business on e-commerce platform JD.com, Alibaba's main competitor, as a small part of a much larger export operation.

"If you're a chocolate bar maker in Guelph, Ontario, JD is not going to just buy a pallet of your chocolate bars that you're going to ship over to them by the pallet to just to sit there," Mr. Blicher said. "You need a distributor in China who's going to say, 'I'm going to champion your chocolate bar,' just like you do here in North America. And you need to have somebody on this side who represents the distributor."

"Jack's message is very much pitched to small companies, but that's not divorced from the political expediency of talking about job creation," he said. "There are cases where small companies have done very well in China. But equally some have been crushed by piracy or haven't followed through/prepared on serving the market well. Large brands invariably are better equipped to deal with these issues."

Whether or not small and large Canadian companies jump aboard Tmall and Taobao following Gateway 17, Alibaba's interest in Canada is broader than enabling exports. According to Mr. Evans, the company already has millions of Canadian customers on AliExpress, which sells inexpensive Chinese goods internationally.

The company is also taking a keen interest in developing Chinese tourism in Canada through its flight and hotel-booking platform Fliggy. Mr. Evans said the number of Chinese visitors to Canada could rise from around 600,000 in 2016 to close to two million in the coming years. With that increase, Alibaba plans to expand its electronic-payment smartphone app into Canada.

He added that Alibaba doesn't "need a smorgasbord of opportunities to make us happy. We'd rather do a few things really, really well and kind of dabble."

How much Canadian businesses can benefit from that dabbling will depend on focus, Mr. Clark said. "I'm sure the event in Canada will have a short-term beneficial impact but maintaining the effect over time comes down to hard work and knowing the market and customer." 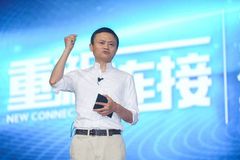