Curtis Lavoie took a road trip to Alberta earlier this summer and used his iPhone to keep from getting lost.

He didn't use it to call around for directions, but instead relied on the phone's built-in geo-location application to find his way around the foothills of his native province.

"As opposed to buying a GPS-devoted piece of hardware whose upfront cost is $150 or more, I used the phone to download GPS Drive by MotionX, which costs just a dollar for the first month of use," explains the Ottawa-based emergency-room physician and father of three.

"The app even had a voice prompt, which was great because I didn't have to fuss with maps in the car. I could just tune out and enjoy the drive."

As Mr. Lavoie discovered, iPhones, with their multiplicity of applications, are changing how people travel these days.

Apps provide currency exchange rates and free translations in a variety of languages, the Lonely Planet phrasebook apps being among the most popular. A Day's Outing can organize a great day trip for you, while Yelp and UrbanSpoon provide restaurant recommendations.

Other apps, like the aptly named Cheap Gas, tell you where to buy cheap gas, while FlightView, allows users to track their flights, record reservation information and check airport delays.

FlightTrack checks your gate number while confirming whether your flight is on time.

GateGuru can help ease the tedium of a long layover. Showing maps of major airports in Canada, the U.S. and London's Heathrow, it details what's available in each terminal and provides reader reviews of airport restaurants.

These apps don't just replicate guidebooks, they best them by being up-to-date.

Some, such as HearPlanet, a free talking tour guide app for iPhone, will even tell you about the cool things surrounding you anywhere in the world.

"I used it on a trip to Nashville, and it was really easy to use," Ms. Fraser says. "It gave a lot of background on the city and a few of the places of interest we ended up seeing, like the Ryman Auditorium."

"They downloaded really quickly. I'd say it's worth using."

Other apps target specific cities. They include TapVenice, an English language food guide to the city researched and written by Venetian Michela Scibilia.

TapVenice is "indispensable," says Dacotah Renneau, head of communications for the Prosecco producer Bisol in the Veneto region of Italy. "When I am there on press trips I cannot live without it. The ability to filter choices by prices, area and open days of the week is amazing," she says.

"It makes exploring the city a tasty adventure, not to mention a good way to avoid the horrid tourist menus and rip-off restaurants that are also present in this city of wonder."

For those wanting to decipher the New York City subway system, Jim Yang, chief strategy officer of Nurun, a global marketing company based in Montreal, recommends NYC Exit Strategy, "by far the most useful app I've come across," he says.

"It is a subway map that tells you what subway car to ride on in order to end up at the right exit. A godsend if you've spent any amount of time battling crowds in the NYC tunnels."

Using local transit is a specialty of Michael Brein, the creator of a series of travel guides promoting sightseeing on public transportation – "the world's first," he says.

Covering Madrid, Chicago, Hawaii. London, Paris, Washington and other international cities, the apps are for sale through his website, www.michaelbrein.com, and include a free copy of GoodReader for the iPad, which Mr. Brein says enables clients "to use my guides on the iPad and navigate the internal links embedded within my PDF apps."

"Users can access in-depth restaurant and nightlife reviews with user ratings, and other details about each location, as well as event listings and slideshows of previous nights," says spokesman Alan Cooper.

"Basically, it grabs your location from GPS and tells you what happy hours are available when and where. You're pretty much able to find some sort of food and drink special at any hour of the day wherever you go," he says. 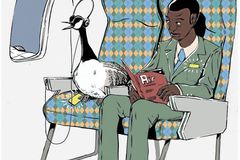