It's Davids versus Goliaths in a bug war to control garden and greenhouse pests.

For three decades, a small Vancouver Island company has been raising armies of those Davids that it dispatches across Canada, the United States and as far afield as Europe.

Applied Bio-nomics Ltd. in North Saanich, about 30 kilometres north of the B.C. capital of Victoria, raises countless beneficial insects and mites, many no bigger than a dot, to attack and destroy aphids, whiteflies, spider mites and other plant scourges.

"We've just touched on the number of predatory mites and insects that are effective predators in the field," said Don Elliott, who with his wife, Marion, founded the company on a shoestring budget in 1980 at the federal government's Saanichton Research and Plant Quarantine Station near Victoria.

The company, which has become one of the world's biggest players in the field of biological pest control, started with a $100,000 federal research grant that enabled Mr. Elliott to develop methods for mass-producing such beneficial arthropods.

Today, Applied Bio-nomics raises its bugs on tobacco plants in 26 tunnel-shaped greenhouses. Tobacco is used because it is hardy enough to withstand withering assaults by insects, both the beneficial bugs and their "food," Mr. Elliott said.

But that discovery, like everything else about the company's success, didn't happen overnight.

"It took us probably 20 years to be able to grow a tobacco plant indoors because they don't normally grow in greenhouses," said Mr. Elliott, who at age 71 is still in charge of research for the company.

Collecting the bugs for packaging also led to other innovations. For example, the company created a low-tech "water slide" for collecting larvae of the predatory midge Aphidoletes aphidimyza, which attacks aphids.

The fattened midge larvae fall from the leaves into a tank with angled sides. Water cascades down and flushes the larvae into a mesh-covered bucket. From there, the larvae are collected and placed in containers of sand or vermiculite, where they turn into pupae, or cocoons, that are ready for shipping.

Beneficial insects account for only 0.2 per cent of the world's pest-control market, said Brian Spencer, the company's long-time general manager who recently bought Applied Bio-nomics and is now its president.

Greenhouses that grow vegetables and flowering plants remain the company's core customers, although the market is shifting toward outdoor uses. "Most of our growth is with outdoor nurseries for ornamentals," Mr. Spencer said.

About half of Applied's product is exported to the United States and Europe. The company even sells to the Netherlands, home to the world's largest biological pest control company, Koppert Biological Systems BV.

Exporting to the Netherlands has its challenges, however. Inspection and landing fees can add $300 to the bill for even the smallest shipment of bugs, he said. "It doesn't matter. It can be for one insect and it's also for 50-million," Mr. Spencer said.

Compared with that, exporting the bugs to the United States has been a snap, even if they have to be quarantined for 24 hours after crossing the border. Homeland Security agents have even volunteered to swap melted ice packs with fresh ones to ensure that the bugs don't get overheated. "They're sensitive to the fact that these products require proper handling and proper temperatures," Mr. Spencer said.

Applied's biggest distributor in the United States is Evergreen Growers Supply, based in Oregon City, just outside of Portland, Ore.

"When I started my business, I'd go to a trade show and people would say, 'You're selling what? You're selling bugs? I'm trying to kill bugs!' The last few years, it's shifted: They even know the names of the bugs," said Evergreen owner John Maurer.

Mr. Spencer said he was receiving so many mysterious calls from people who refused to say what crop they were growing that he added a posting on biologicals for medical marijuana plants to the Applied Bio-nomics website. His market for those products "has completely skyrocketed" in the United States, he said.

"The alternative is these guys were using horrific chemicals," Mr. Spencer said. "Just the thought of my kids buying a joint from somebody that's laced with terrible, horrible pesticides is pretty negative. So I think it's a real benefit to see these guys use bio-controls."

Albert Grimm, head grower with Jeffery's Greenhouses Inc., a producer of flowering plants in St. Catharines, Ont., said the biggest benefit to his company is that Applied Bio-nomics sells specialty products tailored to attack specific bugs. A prime example is Aphidius matricariae, a wasp that feasts on the green peach aphid.

"His product is more expensive but it is actually more cost-effective because he pays attention to the detail," Mr. Grimm said.

"Canada is a very small market for our industry and a lot of the chemical companies don't even bother registering their new pesticides in Canada because of the costs involved in the registration process," Mr. Van der Ende said.

Biologicals also have their limitations. For example, the parasitic wasp Encarsia formosa proved ineffective on a new species of whitefly that had infected the greenhouses' poinsettias. Applied Bio-nomics began producing a new predator, a beetle with an appetite for that new threat.

"Brian is very open, very eager to try anything and just a very free source of information, regardless of if he's selling it or not," Mr. Van der Ende said. "And that was really refreshing. He wasn't just trying to sell us products. He believes in the whole concept." 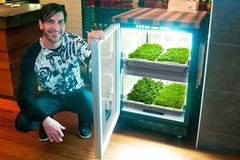 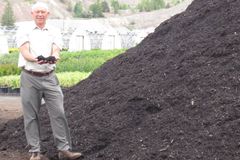 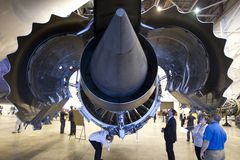 Don't knock down that 50-year-old building; re-skin it 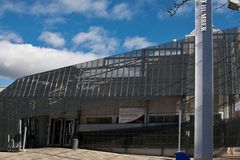 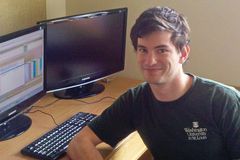