Popular craft-beer maker Beau's Brewery is expanding again – this time to include a new brand of sour beer under its umbrella.

The new brand, Halcyon Barrel House, began as a passion project of Beau's brewer Bryce McBain. He'd been experimenting with mixed fermentation (brewing with a variety of non-standard yeasts and bacteria) at home for years when, in late 2015, he decided to start his own brewery entirely dedicated to wild and sour beers.

With guidance from Beau's co-founder and chief executive Steve Beauchesne, Mr. McBain sought investment from friends and family and began developing his recipes and business plan. He intended to make his beer base (known as wort) using equipment at other breweries, then blend, ferment and sell it at his own retail outlet. But when he learned his plan fell afoul of Alcohol and Gaming Commission of Ontario rules and he'd need to pony up another $250,000 for equipment, his investors balked.

Still employed at Ottawa Valley-based Beau's, Mr. McBain mulled his options. "I was disappointed but still determined to make the project work somehow," he says. It was then that Mr. Beauchesne offered to become the investor and create a new division of Beau's that would house Mr. McBain's Halcyon operation separately.

Mr. McBain jumped at the opportunity. "It's a big leap of faith to put a concept you've been working on into someone else's hands. But I feel it's a great fit, and was the best option for me to start making these beers," he says. Mr. McBain took the nest egg that he'd saved up for his brewery and used it to buy shares in Beau's.

"They appeal to non-beer drinkers," says Shawna O'Flaherty, the co-owner of craft-alcohol review blog Toronto Booze Hound, pointing out that many women – a sought-after demographic in the craft-beer market – appreciate sours because they "tend to feel quite light on the palate" and pair well with salads, chicken and fish.

But there's a dearth of sour beers being made in Canada. "Demand for sour beer seems to be much higher than production of sour beers, or any kind of mixed fermentation," Mr. Beauchesne says. "There's been this pent-up demand for this type of beer, and breweries have been slow to move into the space."

One reason for that is because sour beers are made with yeasts and bacteria – ingredients that can kill a whole batch of conventionally brewed beer if cross-contamination occurs. To reduce that risk, Halcyon is housed in a separate building on Beau's property in Vankleek Hill, Ont.

For Mr. Beauchesne, it's a worthy investment. Sour beer's popularity has steadily grown in recent years. At the 2016 Great American Beer Festival competition, there were 56 more sour-beer entries than the previous year. And earlier this month, Anheuser-Busch bought Wicked Weed, an American brewery focused on sour beers.

As a fiercely independent brewery, Beau's is looking at the creation of the Halcyon Barrel House brand as a startup within the company – one that has its own brewmaster (Mr. McBain), production area, budget and staff, but which shares marketing and distribution with Beau's. That relationship also lets the small-batch label benefit from Beau's national reach.

"It's a smart business move," Ms. O'Flaherty says of the foray into wild and sour beers. "Beau's best beers are when they experiment."

Mixed fermentation requires a high level of skill, creativity and especially patience; some sours, such as lambics, can take years to fully mature. "I like to make sours because there are so many interesting flavours that you can't achieve through brewer's yeast alone," Mr. McBain says.

Halcyon Barrel House's first product is a wild beer – which is similar to sour beer, but younger – named Infinity Mirror Brett IPA. It's a blend of one- and three-month wine-barrel-aged beers. Mr. McBain decided to launch with a wild beer instead of a sour because it's quicker to produce, but his next releases will be sours.

He's got another 200 barrels stewing in his 3,000-square-foot lab, the oldest of which was brewed seven months ago. That one, named Gravity Well, is a "loose interpretation" of Belgium's Flanders red-style beer and will be released in October. Mr. McBain also plans to release some one-off fruit sours and a table beer in the interim.

Halcyon's products will be sold at select Ontario and Quebec outlets, with distribution in Atlantic Canada, B.C., Alberta and Manitoba to follow. 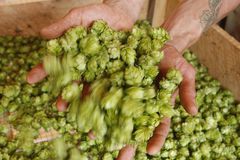 My startup has six co-founders. Here’s how it works
May 9, 2017
Toronto company’s new equipment could relieve vinyl pressing backlog
May 9, 2017
Follow us on Twitter @globesmallbiz Opens in a new window
Report an error Editorial code of conduct
Due to technical reasons, we have temporarily removed commenting from our articles. We hope to have this fixed soon. Thank you for your patience. If you are looking to give feedback on our new site, please send it along to feedback@globeandmail.com. If you want to write a letter to the editor, please forward to letters@globeandmail.com.
Comments