Visitors to Toronto's Canadian National Exhibition have come to expect wacky and extreme food items like deep-fried cheesecake and garlic snow crab fries at the end-of-summer annual event. But these food items are more than just novelties. Restaurant owners and food vendors use the CNE to test sales and get feedback on products they are considering bringing to market.

John Yan's company Eative, for example, set up at the CNE last summer selling gelato and sorbet made fresh on the spot using liquid nitrogen. He used the opportunity to test the product concept and try new flavours. "Our initial intention was to introduce those exotic flavours to the public because there are [so] many exotic fruits from South Asia, Africa and South America [that] people in North America haven't experienced," Mr. Yan said.

Eative opened its own retail location in Toronto's Kensington Market in May, and is back at the Ex this year testing new flavours, such as mango and peach, guanabana (also known as soursop) and lychee. Mr. Yan plans to keep the flavours on his menu once the CNE ends on Sept. 7.

"I get a lot from being at the CNE," Mr. Yan said. "Every time we do a free sample, we can see people's reactions and how people liked the product. It builds our confidence that our products will be successful."

Using the Ex to test a new product idea isn't uncommon for food vendors. "We have a number of concessionaires in the food building that use the CNE as a test market for new products," says Gilbert Estephan, the director of sponsorship, corporate partnerships and exhibit sales at the CNE. But introducing a new food item requires thorough vetting, which includes submitting a proposal and having it go through a jury process.

"Anyone introducing a new concession would have to come back to us with some concepts that are not currently featured in the building," Mr. Estephan said, adding that many food vendors are travelling across Canada, the United States and around the world scouting new ideas and concepts they've seen at other fairs that they think should be brought back to Toronto.

Mr. Estephan's team is also on the lookout. "If we find that someone perhaps is working with a specific ingredient, we bring it back to [one of our food concessionaires] to let them know and to invite them to introduce a concept menu," he said.

Any of the new food items being served at the CNE, such as Bacon Nation's bacon-wrapped grilled cheese, have to first be introduced at the Ex, not at the food vendor's locations outside the CNE grounds.

"They sign a non-disclosure agreement to ensure that the food products they're introducing at the CNE are not launched at their locations outside of the CNE," Mr. Estephan said. "Only once the CNE is complete, then they're welcome to feature their items at their locations."

"We took a risk with the milkshake [at] the CNE because people don't really see us doing things with milkshakes other than the traditional [flavours]," said Gillian Downe, director of marketing and communications for Fran's.

The new flavours quickly became such customer favourites that Fran's decided to take the idea one step further once the CNE finished. The company brainstormed different-flavoured milkshakes based on menu items they were already making in-house like their apple pie, and pitted two flavours against each other. They asked customers to vote using social media and the hashtag #milkshakegames, and ran the game from January till May. "We wanted to roll [our milkshakes] out and have our customers let us know what they liked," Ms. Downes said.

Fran's, which is at the CNE again this summer, is talking about starting a sister brand targeted toward a younger demographic that focuses more on fun foods because of the reception they've received at the CNE. "It was something we had been talking about for a couple of years, and the CNE really did help [solidify that idea] by just watching people in the food building and seeing how Toronto foodies react to food," Ms. Downes said.

Small businesses aren't the only ones using the CNE as a market to test customer reception to new products. The CNE's Mr. Estephan said Tim Hortons introduced the Honey Dijon Ham Pretzel Donut sandwich as an exclusive feature at the fair this year. "They wanted to make sure that they perfected it, and [got] customer feedback," Mr. Estephan said. "So they're [also] using the CNE as a test market opportunity for their stores. Whether they roll it out in its entirety or simply the Pretzel Donut as a single-serve throughout their stores this year remains to be seen." 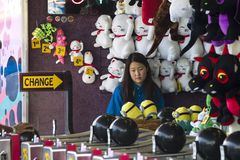